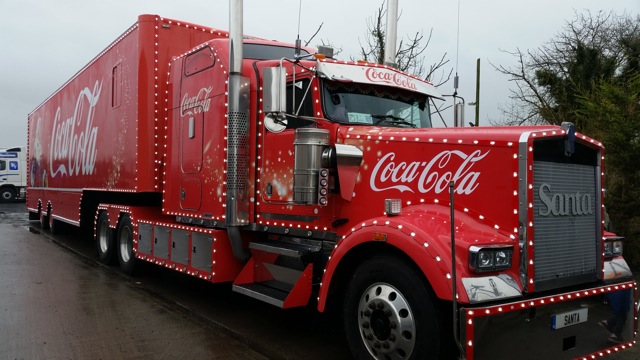 To thank those Designated Drivers who make sure their group enjoys a night out and gets home safely, Coca-Cola will reward them not just with free soft drinks, but with free parking and a full car valet at Q-Park Car Parks* in Dublin, Cork, Galway, and Belfast every weekend during the month of December.

As the Christmas season returns in full swing for the first time in two years, Coca-Cola HBC Ireland and Northern Ireland together with Coca-Cola Ireland are excited to announce the return of its Designated Driver campaign for the 18th year.

Designated Driver is Coca-Cola’s annual initiative that rewards those unsung heroes of Christmas who ensure their friends and family members get home safely with the simple gift of a lift. Drivers can grab two soft drinks from the Coca-Cola range free of charge at over 550 participating venues across Ireland and Northern Ireland. Simply make yourself known to bar staff to avail of your free drinks!

Christmas is an expensive time of year and paying for parking when on a night out can be an added strain on your purse strings. Coca-Cola knows this can be an additional barrier for Designated Drivers and for that reason they will also reward Designated Drivers by providing free parking spaces at Q-Park car parks in St Stephen’s Green Dublin, Grand Parade Cork, Eyre Square Galway, and Victoria Square Belfast every weekend during the month of December. Drivers simply need to prebook their spot in participating Q-Parks via www.q-park.ie and enter the promo code CocaCola at checkout to get parking for free!*

Not only that, but Designated Drivers will also be able to avail of a special Christmas car valet from the Coca-Cola elves while they are parked before 6pm. Simply let the valet team know at any of the four locations that you’re a Coca-Cola Designated Driver and return to a sparkling car with added Coca-Cola Christmas treats.*

This year, broadcaster and influencer, Carl Mullan is stepping up on behalf of Designated Drivers everywhere to raise awareness of the crucial role they play in helping others celebrate Christmas and encourage them to gain the recognition they deserve with Coca-Cola. Carl will be joined by fellow broadcaster Melissa Riddell in Northern Ireland.

Speaking at the launch of Designated Driver, Minister of State at the Department of Transport Hildegarde Naughton, TD, said: “I am delighted to be here today to launch the Designated Driver campaign for its 18th year. We all want to come together this festive season to celebrate with friends and family members, but no one wants that celebration to result in death or injuries because of a road collision.  Unfortunately, 142 deaths have occurred on our roads already this year, an increase of 23 compared to the same period in 2021. No one wants that to be their family member or friend. The Designated Driver campaign not only encourages drivers to stay sober with free soft drinks, but it also recognises the contribution they make in keeping their loved ones safe.”

Sam Waide, Chief Executive Office of the Road Safety Authority echoed the Minister’s sentiments: “Designated Drivers play a crucial role throughout the year, but particularly at Christmas.  Staying sober on a night out is not just about that night, it’s the impact those drinks can have the next day. Research we published earlier this year showed that 1 in 4 motorists (26%) agree ‘there were times when they may have been over the limit when driving the morning after a night out’. That research also showed that 74% agreed that one alcoholic drink can impair driving. This Christmas I urge those going out to plan ahead, consider the increased competition for taxis and perhaps take turns being the Designated Driver.”

Speaking on behalf of Coca-Cola HBC Ireland and Northern Ireland, Miles Karemacher, General Manager said: “It’s fantastic to be back celebrating Christmas in the way we all know and love. The past two years have been incredibly difficult for our customers in the hospitality industry, so we are delighted to continue our Designated Driver campaign and encourage consumers to celebrate safely this festive season. We’re incredibly proud of this campaign and the role it plays in recognising Designated Drivers for the past 18 years, so please enjoy this festive season and celebrate safely!”

Broadcaster and Coca-Cola Ambassador Carl Mullan said, “I’m thrilled to be on board to help spread the word about the Coca-Cola Designated Driver campaign. Our social calendars are set to be jam packed this December and it’s brilliant that Coca-Cola are rewarding those who choose to be the Designated Driver with free soft drinks, parking and a snazzy valet, making a night out that much better!”

Designated drivers can avail of the two free soft drinks from the Coca-Cola range by simply making themselves known to bar staff at participating venues. Drinks from the range include Coca-Cola, Diet Coke, Coca-Cola Zero Sugar, Fanta, Sprite, Deep RiverRock and Fruice.

Designated Drivers can download the Coca-Cola App to find out more about Coca-Cola’s participating venues, free parking and valets in Q-Park.