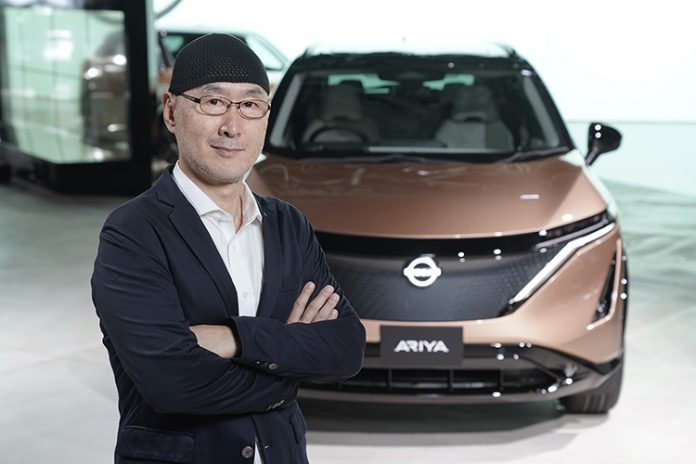 “Our design philosophy focuses not on what we make, but how we make it”.

That’s the key takeaway from Satoru Tai, Nissan’s Global Executive Design Director, as he details how Japanese philosophies are an intrinsic part of Nissan’s DNA. It propels the idea that no matter where a Nissan vehicle is designed, produced or driven, it will always reflect and offer the rich Japanese way of catching things origins from Nissan’s home country. And after 80+ years, applying this philosophy globally has been a major pillar of Nissan’s success – as most recently showcased in the debut of the new all- electric Ariya coupé crossover.

Why is Japanese culture so interwoven?

Japan has such a wealth of customs and valued traditions that they have naturally guided Nissan strongly from the outset. Yet European audiences may not be aware that Japan’s culture isn’t uniform throughout: each region has its own distinct differences.

Take Kabuku for example, a term which roughly translates as “a bold, diverse expression that goes against common approach”. Satoru clarifies that “this is more Tokyo style. Nissan started from Yokohama in the Tokyo urban area. So Nissan’s history is deeply rooted in Kabuku.”

From its local origins, the unconventional, daring and noble thinking synonymous with Kabuku is now something expressed worldwide through Nissan’s range. Soon, Kabuku‘s influences and value will be visible even more on the streets of Europe, via the all-new Ariya.

“As an EV, it takes advantage of opportunities to repurpose and redesign. For example, the front grille has been reimagined as a ‘shield,’ taking on a new purpose of protecting technology while enabling higher levels of driver assistance”. Satoru adds that another key part of Kabuku is its customer impact: “[It’s all about] trying to create something new to please customers. So this key word should be applied for all of our lineup!”

A combination of thinking

However, it takes more than one philosophy to create a successful global vehicle. “Kabuku [ensures] uniqueness, but uniqueness is not enough. It has to be combined with Sei” clarifies Satoru. Defined as “the clever treatment of structures and details” – Sei encapsulates another deeply held Japanese custom: a love of craftsmanship that’s borne out of years and years of application, to arrive at the most beautiful results.

Satoru explains that over hundreds of years, “Japanese craftsmen created very fine, accurate things.  They repeated painting again, and again, and again, and they forged knives again and again” – demonstrating an endless pursuit of finesse and quality. “It’s not what you make finally, but how you make it” that counts, he clarifies.

Even in the modern era, this unchanged spirit and attitude is evident in the meticulous design process of every new Nissan vehicle, all over the world. “Every day, even when you think you’re finished [with a car design], you have to work on it again,” explains Tai-San.

This idea will be all too familiar to the team at Nissan Design Europe based in London, who played a leading role in developing the Ariya’s concept. Here, the concept’s design went through endless refinements, each day becoming more sculpted and fine-tuned, until it received final sign-off by Nissan Global Design Center, in Japan. Satoru says it’s the ultimate expression of Sei: “Sei means you should improve every day. Then we can create a mastery – something truly special.“

Authenticity in an overseas setting

As Nissan has grown into a global company, you might think it would be difficult to ensure Japanese ideals are expressed authentically in foreign lands. But that depends on what authenticity means to you. Tai-San explains, “In Japanese history, we are not talking about always using specific designs or shapes or patterns. Instead, spirit is the important part. As long as you maintain the spirit, you can stay true to authenticity [anywhere].”

Matthew Ewing, Vice President, Vehicle Engineering, Nissan Technical Centre Europe (NTCE), describes how this spirit lives even among his teams on the other side of the world. “One of my favorite Japanese expressions is Utsuroi, meaning fluidity and asymmetry created by nature. This is reflected by our Design and Aerodynamics teams here in Europe as they fine tune a vehicle’s shape – making it as fuel efficient as possible, while retaining a strong, fluid sense of style. It then guides our engineering teams as they bring the emotions of Utsuroi to life during physical manufacturing, while ensuring components are delivered to the highest quality”.

Inspiration also doesn’t flow one way out of Yokohama. Teams continually learn from one another, sharing new ideas, and often cultural styles from Europe feed back to Japan.

For example, “European design is more sculpture and three dimensional” explains Satoru. “Whereas Japanese culture sees things more two dimensionally – as shown by our love of animation.” When both styles are combined in harmony, the result can be pretty spectacular. “The exterior of the Ariya is very three dimensional with its highly sculpted profile” Satoru notes. “But the interior feeling with a flat floor which is very two dimensional creates a, welcoming, comfort and open feeling.”

This demonstrates that while Nissan’s philosophical underpinnings originate in Japan, it’s their combination with outside ideas that leads to greater success. As Satoru highlighted at the beginning, it’s how these ideas are applied that are important, no matter where you are.

These philosophies can even be guiding principles in your own day-to-day life. “Personally, my character is a Kabuku character,” says Satoru. “I am always thinking, how can I be trying to create something different? Even when I see something really nice, I think, how could I do it differently?”