Home Advice Toyota’s ‘Face It Down’ app helps Irish Drivers to be safer and... 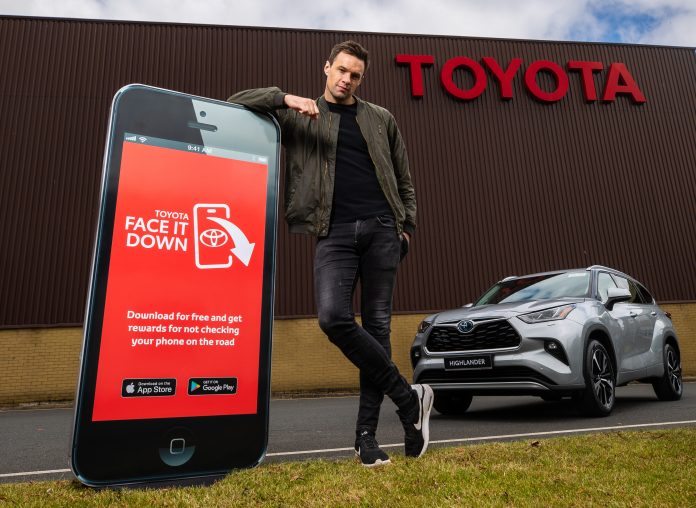 New incentive to dissuade mobile phone usage while driving, open to all

With the empty roads of the last lockdown quickly becoming a distant memory, Toyota is reminding drivers to be mindful in the car and keep their phones faced down for the duration of their journeys. Toyota Ireland is now offering free access to the mindfulness and well-being app Headspace for three months to all users of the Toyota Face It Down road safety app.

In-car mobile phone usage by drivers continues to be a major issue on Irish roads, as evidenced by research conducted by iReach last year which found that 59% of Irish motorists look at their phones while driving. Toyota’s life-saving Face It Down app, which is endorsed by the Road Safety Authority, was developed to help reverse this behaviour. The easy-to-use, free app incentivises motorists to place their phone face down when driving in order to limit distractions and ensure safer roads for all. For every kilometre driven with the app engaged and phone faced down, users will earn points that are redeemable against free hot beverages in Circle K and subsidised parking at QPark lots.

The newest Face It Down incentive, made possible through an exclusive partnership with Headspace, is being launched in an effort to encourage even more drivers to join the Face It Down movement. Headspace is one of the world’s most popular mindfulness apps with more than 65 million downloads and over two million subscribers and the collaboration with Toyota marks the first time Headspace has partnered with a car brand anywhere in the world. The only thing people need to do to avail of the free three-month Headspace subscription is to complete two journeys using the Face It Down app, and then use the unique code to register on Headspace and start their subscription. Since its launch in 2017, Toyota’s Face It Down app has recorded more than 31.5 million kilometres driven in Ireland with phones faced down. Supported and endorsed by Face It Down ambassador, Niall Breslin, more than 50,000 Irish people have downloaded the app and there have been over 56,000 rewards redeemed to date. The free app is available to all motorists, whether they drive a Toyota or not, from Apple Store or Google Play.

Commenting on the announcement Steve Tormey, CEO of Toyota Ireland said, “We are delighted to be partnering with Headspace and giving Face It Down users even more incentives to do the right thing and keep their phones faced down while driving. The Headspace app gives users powerful tools for improving their mindfulness and overall well-being, and it is our hope that by providing free access for three months drivers will learn more positive behaviours that can translate into being more mindful when they’re in the car, particularly when it comes to mobile phone usage.

“Our Face It Down initiative is a prime example of our brand promise ‘Built for a Better World’ in action, and while we’re very proud of what it has achieved to date, we are appealing to all Irish motorists to make the app part of their daily driving routine and keep their eyes on the road at all times.”