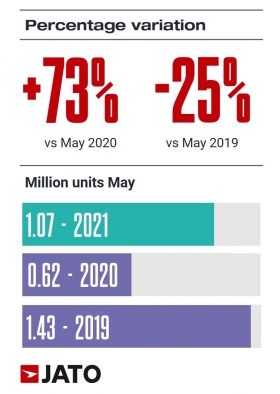 VW’s performance last month demonstrates the value of identifying key drivers of growth and adapting sales strategy at the right moment, in order to meet emerging consumer demand. Although Europe is a mature market, EVs and SUVs are key segments that still show considerable growth potential. “As with the diesel scandal in 2015, Volkswagen Group is again able to overcome the crisis and emerge stronger”, Munoz said.

EVs posted a record share of registrations in May – with 16% – while SUVs made up almost 45% of the total volume. Munoz added: “It has become clear that having the right offering across both of these segments will be crucial to the success of OEMs over the coming years.”

The Volkswagen Golf led the model ranking, while the Volkswagen T-Roc was the most registered SUV. The Tesla Model 3 topped the BEV ranking, and the Ford Kuga was the most popular PHEV during the month. Other strong performers include the Fiat 500, which came third in the general rankings, the Peugeot 2008 which saw an increase in sales of 2% compared with May 2019, and the Ford Puma which took twelth position.