Getting an insight to the ongoing happenings at Toyota’s European Design Centre (ED2) in Southern France has now become tradition each year at the Autostyle Car Design Competition Workshop events, organized by Berman S.p.A. Heretofore, details on the new Toyota RAV4 (2018) and Lexus UX (2019) were presented at the Villa Di Bagno at Porto Montovano, Mantova, Italy. Last year, due to the pandemic restrictions, the representation from the leading car design centres had to take a virtual platform, and on this occasion details of the new Yaris Cross were revealed. 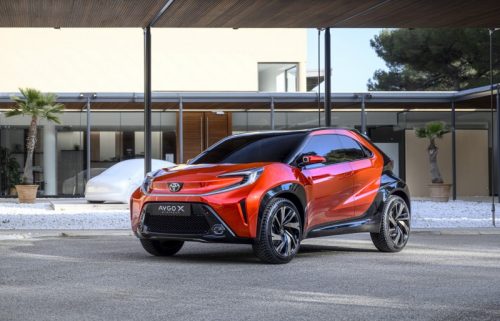 For the 2021 episode, Lance Scott, Chief Designer at ED2 chronicled the development of the recently launched new Aygo X, from concept to the actual production model, with deep descriptive details not previously stated at any other platform. Aygo X is a small SUV (sports utility) car with cool design, that’s set to reignite the city car ‘A segment’.

Lance explained that the project began with the creation of the Aygo X Prologue, introduced last March with the next step moving the main design elements on to the actual consumer version. “It was a fun project. You just want to drive this car. It’s dynamic and sure to put a smile on people’s faces,” he said.

Twenty-five years into his career as a car designer, Lance still holds that strong passion to create something special, and this has been achieved once again with the Aygo X. With an athletic stance, it’s compact, yet spacious, while offering excellent agility. Emotion stirring, even!

“The A-segment is very important to us. Not only has it brought many new customers to Toyota. It also fulfils our mission to provide everyone with the right mobility solution,” Andrea Carlucci, Vice President, Product & Marketing, Toyota Motor Europe. 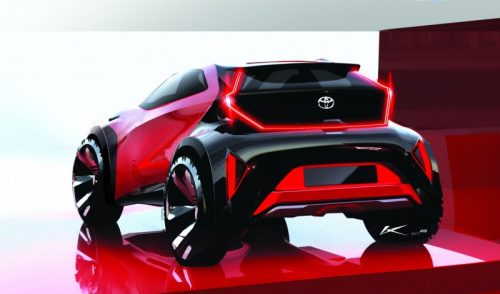 The word ‘spice’ has been added to the car design vocabulary, as mentioned by Lance, with reference to the Aygo X Prologue and its predecessor, the original Aygo: “Since its launch in 2005, the Aygo has charmed youthful, progressive customers with its sense of playfulness and fun. Fun and playfulness has always been at the heart of Aygo. Now, we’ve added to its DNA an additional pinch of hot spice.”

He continued by describing the design concept of the Prologue, many elements, which in effect transcend into the production model. From every angle, it expresses its attitude, with a strong personality and an even stronger stance. By bumping up the size of the wheels, the driver enjoys a higher eye point for greater visibility, as well as improved clearance for whatever the road may bring. Whether from front, rear or side, the Aygo X prologue stands out. A bold bi-tone colour scheme on the rear panels establish a unique graphic profile that grabs attention in the street, while a new wedged roofline also increases the dynamic feeling for a more aggressive sporty image. A rear skid plate houses a bicycle-holder mount, so that escaping the city lights can always be turned into an adventure. Meanwhile, housed in the door mirror is an action-camera, perfect for capturing and sharing moments of exploration.

In order to make the all-new Aygo X the best product offering in the segment, Toyota undertook thorough research into urban driving requirements across the continent by listening to customers’ desire for a stylish, compact and confident car. Clinics were held in Copenhagen, Rome and Berlin. In the accompanying video, Piers Taylor, the BBC TV presented and architect, interviewed a number of professional on their opinion on what’s needed and desirable in the city car marketplace. 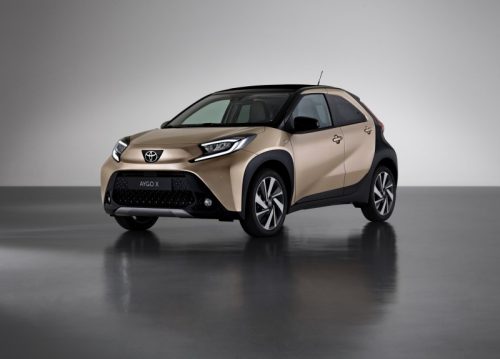 At 3,700mm in length, the new Aygo X is 235mm longer than its predecessor, although the wheelbase is increased by just 90mm. The front overhang is 72mm less than Yaris, while maximum wheel size is increased to 18”. Designed for the narrowest city streets, the Aygo X also has an exceptionally small turning circle of just 4.7m, one of the tightest in the segment. Total body width is increased by 125mm to 1,740mm compared to the Aygo. As a result, the front seats are moved 20mm further apart, increasing shoulder space by 45mm.

“Everyone deserves a cool car like this, and I strongly believe that we could create an emotional, passionate and exciting car for this segment, and I think we achieved that,” enthused Ian Cartabiano, President & Design Director at ED2. “It’s designed for fun,  will go anywhere, and do everything.” 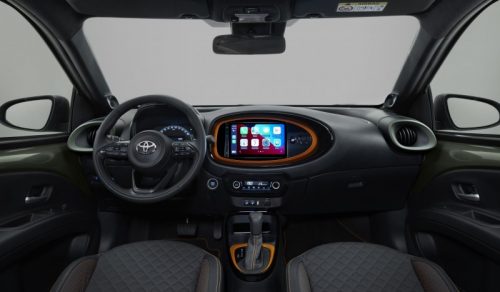 While all the focus is on electric drivetrain these days, the new Axgo X leaves behind a very low carbon footprint. Aygo X is powered by Toyota’s multi-award winning one-litre, three-cylinder engine. This has been improved to meet the latest European standards while offering high levels of reliability and performance, with targeted fuel consumption of 3.9l/100km or 60mpg with 109g/km of CO2 (with manual transmission).

Designed and produced in the Czech Republic for European customers, the all-new Aygo X will be setting the style in European cities in 2022. Jarlath Sweeney