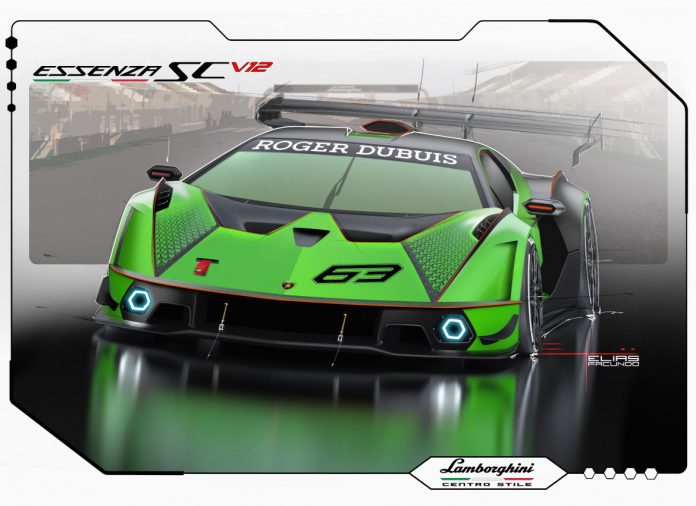 Sant’Agata, Bolognese in Northern Italy was the on-site location for the filming of the third on-line broadcast of the Autostyle Car Design Digital Workshop series. This region is rich in automotive history producing standard, luxury, sports and race cars from a number of ‘blue-chip’ brands. High pedigree cars, rich in Italian heritage and styling, continue to be researched and developed here and no more so than at Automobili Lamborghini S.p.A.

Founded in 1963 by Ferruccio Lamborghini to create desirable GT (Grand Turismo) cars to compete with the likes of Ferrari, which is also based in the region. Following early models produced, featuring the now iconic ‘raging bull’ symbol, it was upon the relationship with the then Bertone styling genius Marcello Gandini, who came up with the unique Countach model line that firmly established Lamborghini in the upper echelons within the luxury sports car sector. One of his other early works, the Miura is deemed to be one of the all-time favourite sports cars in the world.

Design DNA elements from Gandini’s portfolio remain to this day and into the future, as explained by Mitja Borkert, Director, Centro Stile at Automobili Lamborghini, who paid homage to this incredibly talented and foresighted designer, who is also accredited in creating up to ten models for Lamborghini up until the late ‘70s.

Lamborghini Centro Stile was established in 2004 with the mission to combine the spirit of the brand with innovation to create consistently new and unexpected design solutions. The Centro Stile brings together the greatest talents in automotive design from all over the world, who work in close contact with the Technical Office to create the perfect balance between form and function. The hexagon and the Y are stylistic elements that have characterized Lamborghini design since the very beginning. From the interior of the Marzal to the front and rear lights of the newest member of the family, the Sián, the iconic elements of the House of Sant’Agata Bolognese give every detail a character that is both sporty and elegant at the same time.

“With just a few elegant and accurate lines, it is possible to create a new Lamborghini. The design process passes several times from the drawing to the physical model, the sketches become 3D renderings, scale models, and then return to virtual reality to achieve absolute perfection,” Mitja explained. 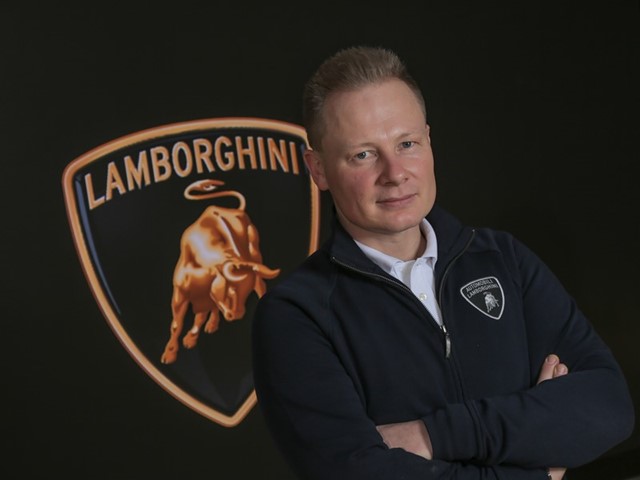 The German native admitted during the introduction to his presentation that the Countach is one of his favourite ‘Lambos’ from yesteryear and called the distinctive style lines contained within the wedge shape as “Gandini Lines”, some of which strongly remain and expanded upon in today’s models, under Mitja’s hand. He mentioned that Gandini’s Marzal from 1967/8, led to the hexagonal shaped trademark that is at the forefront of all Lamborghini cars designed in the modern era.

One third sized models of same featured in the lobby of the company’s headquarters, which included the Military specification LM 002, hard core off-road pick-up truck as Mitja passed through the design centre arena.

Inside, laying in waiting was a full sized prototype version of the new Sián hybrid supercar, translucent in its glowing blue and green colour scheme, this model and others epitomises the extremely high level of esteem and desirability that Lamborghini holds today.

Mitja then led us to the inner sanctum, the hallowed halls of Centro Stile and emphasised that it was a ‘Red Alert’ area that is only accessed by employees. Paintings, drawings and sculptures of past and present designs adorn the halls and walls into the chambers. In a spontaneous act, Mitja demonstrated the classic measuring tape drawing practice, which he described as ‘taping the feeling’ for the car being designed. He praised his design crew highly as being ‘fast and furious’, ‘curious’, ‘super creative’ and the ‘best team in the world’.

He then focussed on what can only be described as the “Star Car” in the family, the Essenza SC V12 track only hyper car, limited edition to 40 units only and co-developed by Lamborghini’s Sports Division Squadra Corse. Festooned in Fastron race livery, this mouth-watering model boasts 830 hp from its 6.5 litre longitudinal V12. This awesome power is handled by a 6-speed X-trac sequential gearbox, situated transversely at the rear and combined with rear-wheel drive.

With moveable front and rear sections (splitters and spoilers) to aid aerodynamics and downforce, the SC V12 is the first V12 to be produced by Squadra Corse, having tasted success with the other models such as the Huracan. “It was a wonderful project, an incredible journey without compromise to ensure the ultimate experience for the owner and driver. I still get goosebumps when I’m near it,” he admitted.

The concept car’s powerful overall design is dedicated to sophisticated aerodynamics. A large wing housing a significant Y-tail-light dominates the rear. All elements are designed as high performance surfaces, integrating design and aerodynamics. The main body is disconnected from the wings, and the hexagon-inspired theme in the side windows is inspired by the Lamborghini Marzal. The Lambo V12 Vision GT uses the typical Lamborghini Y-signature for both front lights and rear lights. A visionary concept requires an interior design ahead of its time. The driver enters the cabin like a jetfighter pilot, from the front of the car.

The aerodynamics benefit from Lamborghini Squadra Corse’s GT racing experience to ensure a higher level of efficiency and higher downforce levels than a GT3 car. The multifunction steering wheel with display was designed inspired by F1 single-seater steering wheels to offer the best ergonomics and a perfect feel. The specific FIA homologated OMP seat with carbon shell embraces the driver to ensure comfort, safety, and stability.

Gandini’s Design DNA can also be seen in the Vision GT, a new concept, created in association with the Grand Turismo Sport for Sony Play Station 4. “It proved to be an unstoppable project,” said Mitja, “with up to eight renditions worked on, all super concepts.  The Lambo V12 Vision Gran Turismo was created to provide the ultimate virtual car for young fans and gamers, who are ultra-enthusiastic about Lamborghini and its futuristic aspirations. It was an opportunity for the design talent within Lamborghini to stretch its wings and visualize a car that, like every Lamborghini, is a head-turner and the best driving experience, but also mirrors Lamborghini’s push on future technologies, particularly in the arena of lightweight materials and hybridization.” 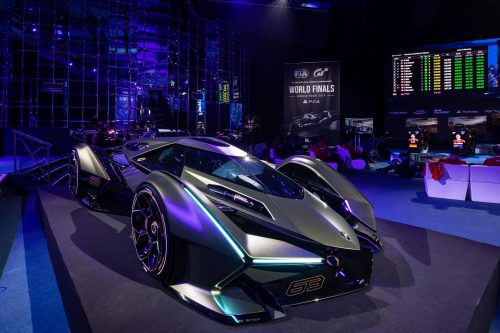 The Lamborghini Museum has been updated to become Museum of Technologies (Mudetec), where fascinating history, the iconic models and tours of the production lines tell the story of over 50 years of innovation that project Lamborghini into the future.

Noticeable in that most of the cars in the Mu De Tech wore the number 63, which refers to the year that the firm was formed and in some cases, only 63 versions of these special Lamborghini cars will ever be made, and more often than not, presold before production begins.

Mitja Borkert attended the Design University of Pforzheim (Germany) where he graduated in Transportation Design. In 1999, he began work at Style Porsche, in Weissach, holding various positions, including General Manager Advanced Design until 2014, when he was appointed Director of Exterior Design. He contributed to the development of several Porsche models (Panamera Sport Turismo, Porsche Boxster 987 facelift, Cayenne, Macan, Mission e, Porsche 917 Concept). Since his arrival in Lamborghini, he supervised the creation of the Super Trofeo Evo, the Urus, the Terzo Millennio, the Huracán EVO, the Sián FKP37 and the Lambo V12 Vision Gran Turismo plus the aforementioned projects.