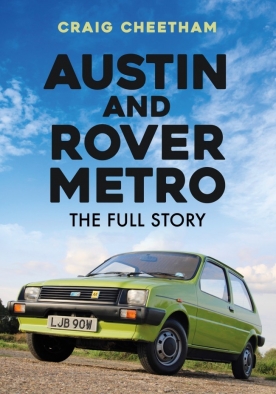 THE AUSTIN METRO AT 40 – www.amberley-books.com

It was the ‘British Car to Beat the World’. Launched in October 1980, the Austin MiniMetro was the UK’s first proper supermini, and a car that would finally bring British Leyland bang up to date.

Now, almost four decades to the day since it first appeared, the humble Metro is being celebrated in an all-new book by noted motoring historian and author, Craig Cheetham.

Austin and Rover Metro: The Full Story tells the tale of what was arguably one of the UK’s most important cars ever, from its gestation in the mid-1970s to its ultimate demise after an 18 year production run, by which time the Metro had morphed into the Rover 100.

The book touches on the Metro throughout its multiple generations, including the mid-Eightis facelift, the launch of the Rover Metro and its final guise as the 100. It also tells the tale of Metro in motorsport and the launch of the 6R4 rally car, as well as the lesser-known story of how Corgi Toys developed its own Metro in tandem with British Leyland.

“The Metro is a car that touched millions of lives,” said author Craig Cheetham. “Whether you bought one new, your mum had one or you learned to drive in one, it was part of the fabric of British society and remained on sale for almost two decades.

“Today, it’s a rapidly appreciating classic that’s especially popular with younger enthusiasts. And as it turns 40, it’s definitely time to celebrate the achievements of the British Car to Beat the World.”

Austin and Rover Metro: The Full Story is available now from Amberley Publishing, priced at £14.99. You can order a copy at www.amberley-books.com, via all good bookshops or through Amazon.

They were a marketing masterstroke that revived a brand and put Britain’s biggest independent car manufacturer in front of a whole new audience, but the MG Z Cars were ultimately not enough to save MG Rover.

In this new book, launched just ahead of the Z Cars’ 20th anniversary in 2021, former Auto Express journalist and noted motoring author and historian, Craig Cheetham, tells the story of the Z Cars through the eyes of someone who was heavily invested in the car industry at the time.

From the demise of Rover Group, the establishment of the Phoenix Consortium and through an interview with an unlikely hero, the book tells the tale of how the Z Cars came into being, with other exclusive stories from the cars’ designers and PR and marketing teams at the time.

It also tells the development story of the new MGs, which came to fruition in record-quick time, charts the impressive media reaction to the new cars and provides insight into the MG Monogram programme, which included unique paint and trim finishes.

The book also looks at the resurgent MG’s motorsport campaigns, its presence in popular culture and the evolution of the three cars on an extremely limited budget, as well as looking at low-volume specials such as the ZT 260 V8 and ZR Express delivery van.

“The last days of MG Rover were torrid, but the Z Cars kept the company on life support and captured the hearts of younger enthusiasts,” said author Craig Cheetham. “Today that still rings true, and as the cars turn 20 years old a whole new generation of classic car enthusiasts are starting to enjoy them.

“MG Rover may have gone, but the enthusiasm for these cars and the story they tell lives on. The aim of this book is to tell the tale of how they came about and of the sheer enthusiasm and determination of the engineers and designers within MG Rover to survive against the odds.”

MG Z Cars is available now from Amberley Publishing, priced at £14.99. You can order a copy at www.amberley-books.com, via all good bookshops or through Amazon. 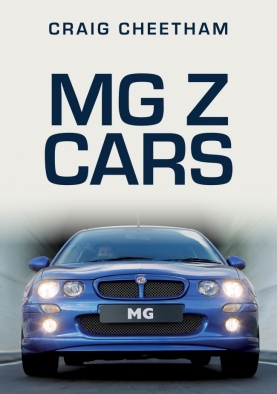