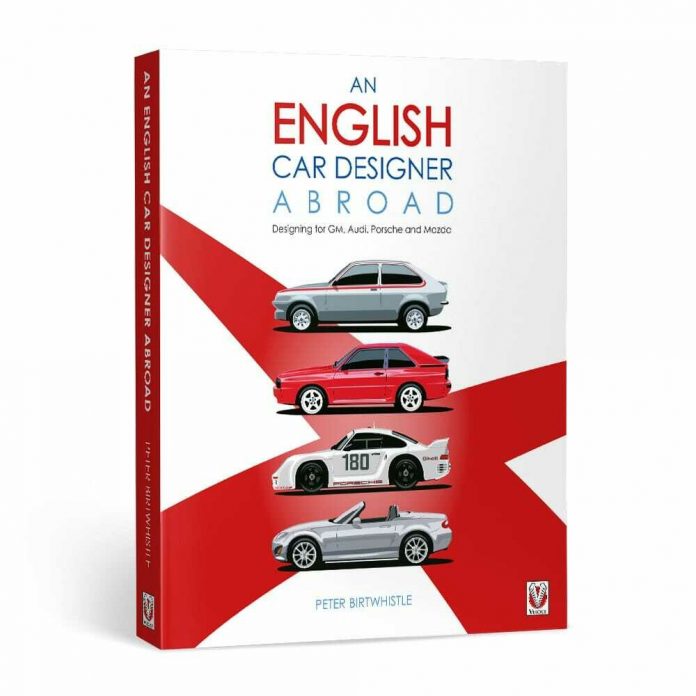 Having had the privilege of serving on the adjudication panel of the Berman Autostyle Car Design Awards has allowed me over the years to meet many of the world’s top car designers. Collectively, they are an eccentric bunch. Always thinking, creating, looking and expressing a serious passion about their work. Ambitious, yes, to a degree but also seriously competitive. All these elements make for an interesting career and the recently published book by Peter Birtwhistle describes these traits and more.

Titled “An English Car Designer Abroad” – ‘Designing for GM, Audi, Porsche and Mazda’ and published by Veloce, the 256-page hardback goes inside the secretive world of car design. Behind the closed doors of the design centres, much more happens besides producing drawings, making clay models and creating concepts and prototypes. There’s politicking, one-upmanship, opportunity and glory. Peter experienced it all through his multi-marque career with English, German and Japanese brands. Then there were the cultural changes to climatise to and evolve if and when possible, details of which are well described by the author.

Born in Reading in the early 1950s, Peter shared his father’s enthusiasm for cars and benefitted from his mother’s artistic talent. It was inevitable that he would become a top car designer, turning his fascination into a vocation. In his higher level education days he befriended a fellow student in Martin Smith, who made his name with Ford and Peter followed him to Audi. Stints at Chrysler and Vauxhall in his student and early career helped cut his teeth in the business. He was proud of his first rendering at Vauxhall Styling, the Ventora V8, which had limited appeal, due to the oil crisis (a large family saloon, featuring a 5.4 litre Chevrolet engine).

As an avid follower of motorsport and despite the increasing input from Opel, the other automobile brand within the GM – General Motors Group, Peter persisted, with his Vauxhall Chevette HS 2300 and HSR models capturing the hearts of every rally driver and supporter.

In 1977, Audi beckoned, (through Martin Smith) and here began a thirty-year period with German and Japanese brands. Not only does Peter describe in detail the happenings at the car design creative centres at Audi, Porsche and Mazda but outlines his arrival at each brand’s headquarters, highlighting the heritage of each manufacturer and famed models together with providing a broad selection of car photos and drawings from vehicles that were produced, with some exclusives that failed to make the assembly line.

Peter’s years at Audi coincided with a time of change from the original NSU model to the Audi 100 and 80. Probably his best claim to fame here was the Audi Quattro and Sport Quattro, which transformed Audi into a true sporting marque.

Having always admired what went on at the various Italian Design Studios, which were at the forefront of the industry at the time, Peter often collaborated with his Turin counterparts, right throughout his career.

A move to Stuttgart with Porsche lasted five years in 1983, not his happiest period as politics often intervened, disturbing the flow of creativity and what he wished for the iconic brand. Helping to establish a European design facility (in Germany) for Mazda, and understanding the culture of the Japanese way had to be digested quickly before getting to transforming the rather conservative brand into a successful mainstream mid-premium manufacturer.

He oversaw, as design director, the styling behind the Mazda MX5, RX7, 323F, Gyssia and Mazda6, the latter beginning the Zoom-Zoom model theme, which also included the original Mazda3.

Retired since 2014, Peter is now replaying his years at the helm by sharing his passion and experience as a lecturer to students at Coventry University’s Transport Design Course. Jarlath Sweeney