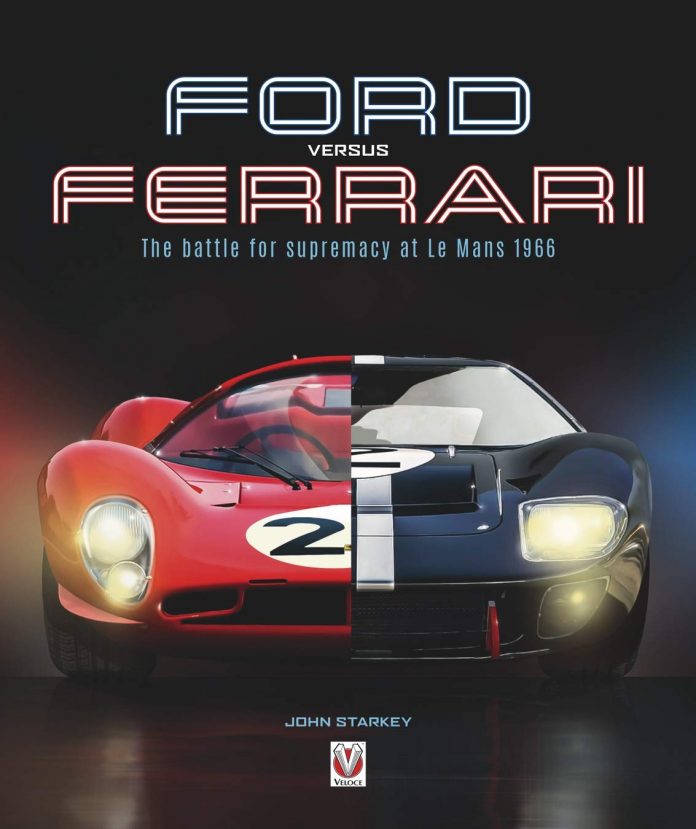 The timing couldn’t be better. To launch a book that comrades with the release of a blockbuster movie augurs well for footfall through the bookshops and on-line sales. One of Veloce Publishing Ltd’s latest titles, Ford versus Ferrari with the subtitle “The battle for supremacy at Le Mans 1966” sums up this famous rivalry between two very differing car manufacturers. Although this famous sportscar race took place over 53 years ago, there were underlining rumblings between the two automotive giants of mainstream cars and sportscars for some years before then.

The first few chapters give the background to this great contest which brewed from Ford’s failed attempt to purchase Ferrari. Then ‘Blue Oval’ boss, Henry Ford II, was looking to execute a full takeover, but while Enzo Ferrari was willing to sell a shareholding to subsidise the high financial outlay of his Formula I and sportscar racing exploits, buying out the famous Italian marque completely, as Ford proposed, was not on the cards.

This in turn led to a rebuke from the US side culminating in Henry stating, “If we can’t join them, we will beat them,” referring of course to winning Le Mans.

That was 1963, whereupon Henry began to assemble the elite crew and machinery necessary to bring this dream alive. In-house personnel were put forward and expertise was drafted in from various sources, all with motorsport pedigree. Probably the most significant person at the time was Eric Broadley, Lola designer, whose early prototypes of the professional Lola Mark VI GT coupe evolved into the conquering Ford GT40 (code named X40).

A few early outings from 1964 onwards showed the GT40’s speed but also its unreliability. Enter race specialists Carroll Shelby and Ken Miles who took on the challenge of preparing the Ferrari challenger for the biggest 24 hour circuit race.

Persistent handling deficiencies and gearbox gremlins had to be sorted. It all came good (fortuitously) with a first and third at the 1965 Daytona 2000 race and second overall in Sebring, battling for early supremacy against Ferrari and others. Continuous tweaking with the bodywork and drivetrain followed in order to reach pedigree level for the big French race at the Sarthe.

As the author John Starkey puts it; “It took the Ford Motor Company from 1964, when it first entered the GT40 at Le Mans, to 1966 to finally win the race. Three years, par for the course, where a new entrant to motor racing is intent on winning the championship.”

At Le Mans ’66 Ford arrived with all-guns-blazing with a high-profile presence (the campaign reported to cost $10m). “Right from the wet start the Fords dominated, running first, second and third,” as John describes in the 132 page book, full of descriptive text and a mixture of black and white photos from the 111 picture collection. These three leading positions were held with Bruce McLaren (yes of McLaren FI fame) and Chris Amon taking the chequered flag ahead of Ken Miles and Denny Hulme (who led for long periods) with the gold Bucknum/Hutcherson car third, 12 laps behind.

Miles, who had won in Daytona and Sebring earlier in the year was peeved about not finishing first as he had slowed in the closing laps to allow Ford engineer a photo-finish dead heat – unfortunately officials then decided that as the McLaren / Amon car had qualified further back, it had travelled further and was therefore the winner.  Miles did however share in the glory of Ford winning the Manufacturers’ Championship in a clean sweep of endurance race wins, although he was tragically killed the same year testing an evolution of the GT40 known as the J-Car.

Further wins were recorded in the years to follow at Le Mans. Despite having a faster car, the Ferrari 275 GTB/C failed to again beat Ford at Le Mans and withdrew from sportscar racing at the end of 1967.

The GT40 tasted further success in 1968 and 1969. In recent years Ford introduced a new GT, (sometimes known as the GT50 to honour fifty years since the famous success) and scored an emotional win in the GT category on its debut at Le Mans 2016. After a further 19 class wins that latest GT has now bowed out of active competition at the end of the 2018-19 season.

A super read, which will certainly encourage one to go see the movie!