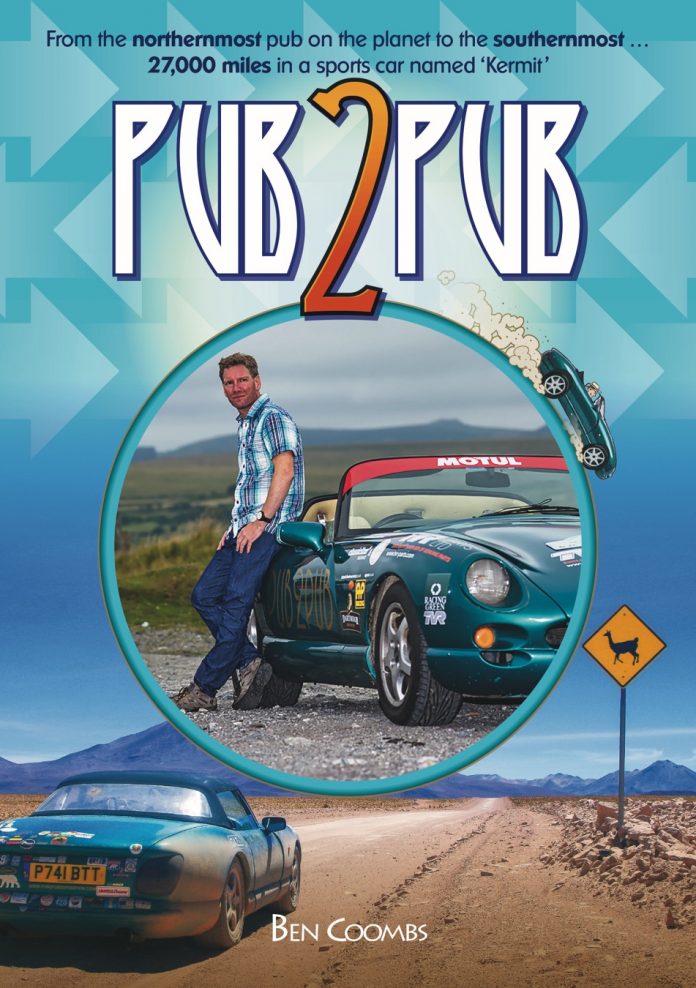 It took four years of planning and eight months to undertake – Ben Coombs’ ambitious adventure to drive from the Northmost pub in Scandinavia to the Southernmost in South America is brilliantly described in his Veloce Publishing book titled appropriately enough as Pub2Pub.

In turning the 240 pages within this paperback, the story is as much about the car that Ben ventured with, as the Bristol native itself. The 27,000 mile journey proved a good challenge to the Blackpod built TVR Chimaera, dominant in its British Racing Gear and affectionately called ‘Kermit’.

Ben took on the task in a way to beat his depression demons and it worked as the arduous route through land and sea brought him many highs and lows, all of which he conquered. Once the reader begins the journey with Ben together with friends and acquaintances that joined along the way, it is educational – providing interesting geography and history lessons of significance.

A deserted hotel bar in Svalbard, an island North or Norway was the unusual starting point and gracefully ended at Tierra del Fuego, the archipelago in southern South America.

Some enjoyable and entertaining stop-offs were recorded along the expedition, notably driving the Nurburgring in Germany and visiting the Koenigsegg Sports Car factory in Sweden. Armed with a few spares, some cash and sponsor decals on Kermit, a Dodge Charger with its 5.7 litre HEMI V8 accompanied the trans-American route with deadly spiders in Arizona and a call to the cheekily called Ale ’Inn bar in remote Nevada, were some of the memorable episodes.

Brushes with the law were aplenty which required a mixture of stubbornness, determination and creativity on Ben’s part to get the right-hand-drive two-seater sports car through border controls, especially in Costa Rica, taking up to 10 days, sleeping in the car, before approval was granted. Other memorable movements was latching on to the Dakar Rally in Peru and a courageous trek across the flooded Salt Flats Lake in Bolivia, described as the ‘world’s biggest mirror’. Indeed Kermit turned out to be the hero, necessitating little roadside repairs, nothing that couldn’t be dealt with by Ben’s persuasiveness and intuitiveness. As Ben acknowledged: “Back in 20th century Blackpool, they were building much tougher cars than most people realise”.

As a car nut, Ben took notice of many different makes and models as each country and continent was passed and got pretty excited with the lavish car collections in Chile, which included a DeLorean. It was then as the adventure came towards the end that he began to worry about family and became anxious of Kermit’s condition and stamina on the last leg. There was no need to fret, as the 1997 example of the TVR of which 6,000 were made, is probably the most famous of all.

Live the dream with Ben and his team with this fascinating read, with his carefully scripted descriptive text enhanced by a selection of superb photographs. Jarlath Sweeney