One of the Noughties’ most powerful Mercedes formerly driven by Roger Federer, one of the era’s greatest tennis players, is to be offered for the first time at auction next month (20 June) before a home crowd at the Bonhams Bonmont Sale in Cheserex, Switzerland.

The 2009 Mercedes-Benz CLK 63 AMG Black Series was delivered new to Federer, holder of 20 Grand Slam men’s singles tennis titles (an all-time record shared with Rafael Nadal), in the year he secured his first Grand Slam of all four major tennis titles, with his name being the first in the vehicle’s registration document. It has an estimate of CHF150,000 – 200,000.

One of fewer than 1000 produced, the CLK63 AMG two-door coupé was, at the time, the most powerful of the Mercedes-Benz AMG series. With its 6.2-litre engine producing 507bhp, the AMG is capable of accelerating from 0-62mph (100 kmh) in 4.7 seconds and has a limited top speed of 188mph, comfortably exceeding Federer’s fastest recorded serve of 143mph.

The AMG’s specification is as impressive as Federer’s player statistics. As a track-focused Black Variant, the suitably sporty Grand Tourer’s V8-engine is matched to a Speedshift 7-speed paddle shift automatic transmission and a mainly hand-built tuned exhaust system. Inside the stripped out interior features bucket seats front and rear and a carbon fibre fascia. 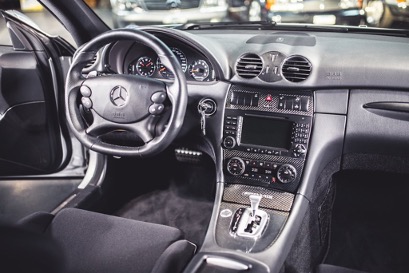 The AMG will be one of the stars when Bonhams returns to the Bonmont Golf & Country Club for its third edition of the prestigious sale. This will also be the first live sale for the auction house on the continent this year.

Paul Darvill, Bonhams European Auctions Manager, said: “There is nothing like the energy and ambience of a traditional saleroom, particularly at The Bonmont Sale, which has established itself as one of Bonhams flagship auctions.

“We are looking forward to returning to Switzerland and welcoming our Swiss clients back to our saleroom. We are sure that the audience will welcome this AMG which will appeal to not only to motor car collectors but tennis enthusiasts and fans of Roger Federer, surely one of the world’s most well recognised sports star and a great ambassador for his native Switzerland.”

A Swiss-supplied 1963 Ferrari 250 GT Lusso, estimate CHF 1,350,000 – 1,950,000, one of the most desirable classic sportscars, will lead the exclusive array of marques including Aston Martin, Bentley, Mercedes-Benz and Rolls-Royce offered in the sale.

The Bonhams Bonmont Sale 2021 will be held as a traditional live auction on Sunday, June 20, with bids accepted from clients in the room (respecting social distancing and all local COVID-related guidelines).

The sale will also be available the Bonhams App, which provides registered bidders the opportunity to bid in real time online via Bonhams.com while watching the auctioneer and videos of cars on offer. Absentee and telephone bids are also encouraged.