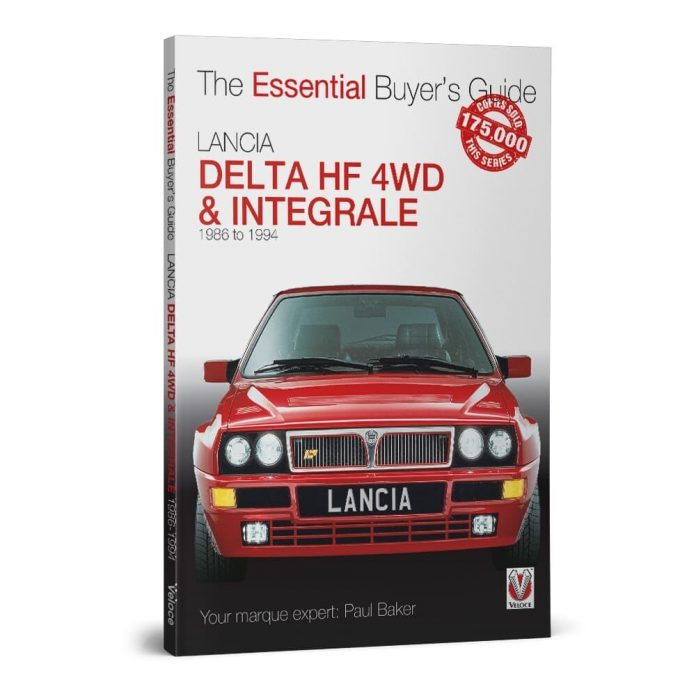 If ever there was road car more desirable to rally enthusiasts, the Lancia Delta HF 4wd  & Integrale series would be topping the list. The mass production version of the most successful World Rally Championship car in history with its six consecutive titles came about after the discontinuation of the Group B specification rally car. Lancia had to replace the S4 with a challenger for the new Group A classification alongside the required homologated road going version. And what a beauty transpired, as depicted and described by Paul Baker, author of the ‘Lancia Delta HF 4WD & Integrale (1986 to 1994)’, from Veloce Books ‘The Essential Buyer’s Guide’ series.

Created by the famous Italian design house Giugiaro, the Delta was a stylishly proportioned 5-door hatchback set off by sporty twin headlamps and wide wheel arches on some editions.

From the initial 8 valve Integrale in 1988, a number of evolution models emerged such as the 16 valve, the HF Integrale (Evo I), followed by the second generation of same.

Should one be in a position to buy one such example of this classic car family, Paul’s words of advice in this in this 96 page softback Guide goes a long way and will save a lot of time, experience and heartache. It covers everything from a scoring system for evaluating a potential purchase, buying at an auction, advice on maintenance and running costs, as well as what to look out for, especially any pitfalls.

Other information provided include full technical spec, including broad driveline details from the 4 variants of the 2.0-litre multi-valve petrol engine that had horsepower outputs from 185-215bhp.

Through his involvement with the Lancia Motor Club, Paul advises interested parties to join up, network, share the interest and gain more knowledge from this now classic car. “Buying the right car and you will never regret it,” he said. “This car is extremely investable ……… and is as good today as it was when it was made , a joyful experience.”

Apart from its Italian design traits, Delta’s presence with its power, road holding and positive steering feel are unique and rarely exceeded, even though it was made in left-hand-drive only (Alas!).

Even if not in the running to buy one, this book makes for an interesting read, an excellent historical record of a fantastic machine in its heyday. Jarlath Sweeney