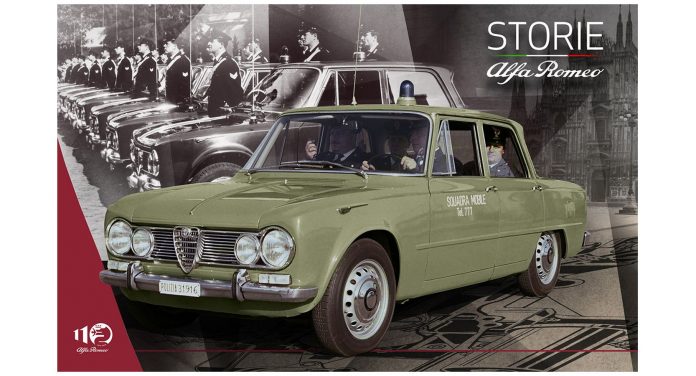 The cars of the State Police Corps

In post-war Italy, Alfa Romeo cars were a legend. They proved that they were faster than any other car, both on the track and the road. They were powerful and they always won – like good over evil. They had all the right technical and symbolic characteristics for becoming the cars of the State Police Corps.
The connection between Alfa Romeo and the Police Forces is an interesting little piece of the history of the Republic. From the 1950s on, Alfa Romeo cars were selected as the official emergency call-out vehicles. They were known as “volanti” and citizens soon got used to seeing them around, soon giving them other nicknames: those used by the State Police were known as “Panthers” and those of the Carabinieri, or military police, were called “Gazelles”. Two metaphors that underlined their power and agility.
The very first Panther was an Alfa Romeo 1900, built in 1952, its aggressive silhouette having inspired its name. The first Gazelle came into use a few years later. The most famous police car of all was the Giulia Super, but the Police used many other Alfa Romeo models, practically all the most important ones, from the Matta to the Alfasud, Alfa 75, Alfetta, 156 and the Giulia in use today.

Alfa Romeo is a lifestyle

The history of the brand’s relationship with the Police Forces runs parallel with the story of how Alfa Romeo itself evolved over the years. And this theme introduces us to another protagonist of our story: Orazio Satta Puliga, born in Turin, with Sardinian ancestry, and a passionate fan of Alfa Romeo. It is to him that we owe the famous phrase: “There are many automotive makes, among which Alfa Romeo stands apart. It is a kind of affliction, the enthusiasm for a means of transport. It’s a lifestyle, a special way of conceiving a motor vehicle”.
Appointed director of design in 1946, Satta Puglia had a hard task ahead of him: not only did he need to rebuild everything that had been destroyed by the war, but he also had to transform an artisan company into a modern manufacturing force, continuing along the path paved by Ugo Gobbato.
Satta Puliga set straight to work. When he arrived, Alfa Romeo was producing every single mechanical part at its Portello plant, in line with strict criteria of exquisite craftsmanship. He rationalized the process, outsourcing the production of the secondary parts and cutting the costs. Meanwhile, he began thinking about creating the new “mass produced” Alfa Romeos, to be built using the most efficient technical and organizational methodologies around.

Satta Puliga’s 1900, which dates to 1950, was the first left-hand-drive Alfa Romeo, and the first to have a self-supporting body. He abandoned the traditional 6- and 8-cylinder engines for a new 4-cylinder version with aluminum head and two camshafts with chain control. The engine was powered by a single carburetor, offering brilliant performances and a low taxable horsepower. The 1900 delivered 80 hp. It was agile and fast, just as you would expect from an Alfa Romeo, but also very easy to drive. In other words, it was designed to target a bigger market. Its launch slogan was: “The family car that wins races”.
The 1900 was also the first Alfa Romeo vehicle to be produced on an assembly line. A veritable revolution: the total manufacturing time needed to produce one vehicle was reduced from 240 hours to just 100. This new approach led to an unprecedented success in terms of sales: the 1900 alone sold more than the total Alfa Romeo production of other vehicles up until that time.
This success was also due to careful product cycle management. Several high-performance variants were introduced (the 1900 TI, 1900 C Sprint and Super Sprint, and the 1900 Super), winning important international competitions within their category. And Alfa Romeo continued collaborating with its coach builders: the BAT (Berlinetta Aerodinamica Tecnica) concept car series was launched on 1900 mechanics, created by Bertone and designed by young Franco Scaglione.
The same engine as the one used in the 1900 was also adopted by the AR51, better known as the “Matta”: a 4×4 launched to replace the post-war off-road vehicles of the Italian Armed Forces.

While Alfa Romeo had embarked on the track of serial production with the 1900, it was with Giulietta that it truly became a large-scale automotive manufacturer. The man in the driving seat of this transformation was Giuseppe Luraghi.
Born in Milan, he had studied at the Bocconi University, where he also practiced the “noble art” of boxing. When he enters our story, he already had a reputation as an incredible manager, with a long experience at Pirelli under his belt. From 1951 to 1958 he was general manager of Finmeccanica, the holding company that controlled Alfa Romeo. After a short period spent at Lanerossi, he returned in 1960 as president of Alfa Romeo, a position he would hold until 1974.
A keen writer, journalist and publisher, Luraghi also promoted cultural initiatives within the company. In 1953 he appointed Leonardo Sinisgalli, “the poet engineer” to create a magazine that would set up a dialog between humanist culture, technical knowledge and art. The result was entitled “La Civilità delle Macchine” (The Civilization of Machines), its writers including Ungaretti and Gadda.

On the eve of the “boom”

Upon his arrival at Alfa Romeo, Luraghi revolutionized how the production was structured, calling in designer Rudolf Hruska and Francesco Quaroni to reorganize the industrial processes. He realized that there was a huge opportunity up for grabs: the Brand had exceptional visibility, its sporting victories thrilled millions of people and fueled their dreams. It was time to translate this success into sales. The economic boom was just around the corner and the car was the most coveted possession: for Luraghi, owning an Alfa Romeo had to become the distinguishing mark of those who had truly made it in life.
From elite product to object of desire: the company now pointed all its design and industrial resources in this new direction. And Giulia was the product of this turning point in the history of Alfa Romeo, a car designed to boost sales but at the same time confirm the brand’s technical tradition and sporting vocation.

The new model takes us back to the link between Alfa Romeo and the Police forces. The first Gazelle of the Carabinieri was none other than a Giulietta, destined for the patrol service. In fact, it took up service already equipped with a radio system for communicating with Headquarters. In the language of the Italian Army, the Gazelle represents the patrol vehicle driver: fast, agile and tough. These characteristics were immediately transferred to the car.
Shorter, narrower and lighter than the 1900, Giulietta took Alfa Romeo into a new segment, for a new public. It offered a modern, streamlined exterior and maximum comfort on the inside, as well as exceptional road holding, quick starting and speed. Its engine (entirely in aluminum) delivered 65 hp, racking up a maximum speed of 165 km/h.
At the Turin Motorshow in 1954, Giulietta made its debut in the coupé version. Giulietta Sprint, designed by Bertone, was a low-lying, compact, agile little car that became an “instant classic”. It is worth noting that the sporty version was modeled on the standard one: an unconventional (and typically Alfa Romeo) choice, proposed again a few years ago by Giulia Quadrifoglio.
Giulietta was a roaring success, becoming so popular that she earned the nickname “Italy’s sweetheart”. And her sales record is just as extraordinary: more than 177,000 units.

Only a revolutionary vehicle could knock Giulietta off the top spot. Satta Puliga knew this only too well. And his team (Giuseppe Busso, Ivo Colucci, Livio Nicolis, Giuseppe Scarnati and tester Consalvo Sanesi) set to work, developing a vehicle that was definitely way ahead of its time.
Giulia was one of the first vehicles in the world with a differently-shaped supporting structure. The front and rear parts were designed to be shock-absorbent and the passenger compartment was extremely rigid, to protect its occupants: solutions that would only become compulsory a good while later.
The 1.6-liter twin-cam engine of Giulia was an evolution of the 1.3-liter 4-cylinder one, and it stood out for its sodium-cooled exhaust valves.
The design of Giulia was also revolutionary. Compact, with well-proportioned volumes and a unique style. The low front and truncated rear were inspired by aerodynamics. The launch slogan described the car as “Designed by the wind”. Thanks to the innovative development work carried out in the wind tunnel, the Cx of Giulia was extraordinary for its time: only 0.34.
The vehicle was overwhelmingly successful: it achieved a total of more than 570,000 sales (more than triple those of Giulietta). Giulia became an Italian icon.
Visitors to the Alfa Romeo Museum in Arese will find a room dedicated to Alfa Romeo in the world of film. It hosts many appearances by illustrious vehicles, but Giulia is the undisputed star of the show, featured in the many “poliziotteschi” films made during that period – which started out as “B-movies”, and later became cult films. In these movies where “cops and robbers” clash, Giulia often stars as both the police car and the getaway vehicle.