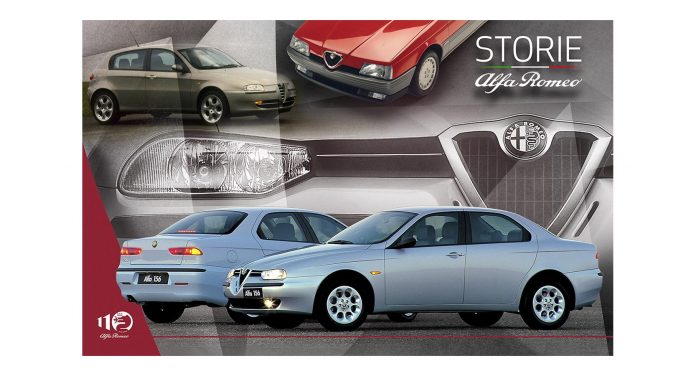 A saloon with a sporty heart

Almost a million people visited dealerships on the first “open doors” Sunday. Over 100,000 orders in a few months. Total sales of 680,000 between 1997 and 2005. These numbers make the 156 one of the most successful Alfa models in history
The 156 was presented to the international press in 1997 at the Centro Cultural de Belém in Lisbon. The company’s intentions were clearly declared: to create a sedan that combined style excellence and impeccable dynamic behavior, with a perfect balance between performance and handling. A 100% Alfa Romeo product formula.
The goal was highly ambitious – and the result was one of the best front-wheel drive cars ever.

The first ever cars were built with rear-wheel drive – but from the beginning, the hypothesis of front-wheel drive fascinated designers. The idea appeared in Alfa Romeo minds in the first post-war period. Satta Puliga and Busso had been convinced of the potential of this solution, and started a development program that aimed to make the 1900 the brand’s first front wheel drive. However, the company decided to head in a different direction: At the beginning of the 1950s, the idea of creating a smaller Alfa Romeo was considered, with a front-wheel drive, leading to studies of various kinds of powertrains.
However, none of these projects would reach the industrialization phase. But the decision was only delayed. Alfa Romeo decided to extend its range with a model a bit below the Giulietta: a compact “full speed ahead” model, out to boost sales.
Instead, the new project was entrusted to Rudolf Hruska, the ‘father’ of the various Giulietta versions. Alfa Romeo commissioned him to carry out a double responsibility: to simultaneously design both the new car and the factory where it would by built. Thus was born the Alfasud, the first Alfa Romeo front-wheel drive model

Alfasud was born both “from a white sheet” and “from green fields”: it was one of the infrequent cases in which a car factory is designed and built to produce a specific model. The car had no technical constraints to respect, apart from being faithful to its product objectives.
“It obviously had to be a front-wheel drive. And it had to be a luxury subcompact, a 5-seater car with a very large trunk.” So Hruska described the project a few years later.
The 1.2 liter “boxer” engine (with opposing cylinders) is preferred to the 4-cylinder in-line, because it is lower and more suitable for an aerodynamic profile. The unprecedented “two-volume” body was created to improve access to the boot – a 400 liter volume thanks to the fuel tank being set under the rear seat instead of between the seat and the luggage area. This made for an innovative, functional and safe approach which was immediately widely imitated.

Alfasud was the first important order taken on by Giorgetto Giugiaro and proved to be a huge commercial success. To respect all the constraints of space and size, the young stylist invented the characteristic “high tail”, and connected it to the aerodynamic front through a simple streamlined line.

Alfasud went into production in 1972, the year when Brand production exceeded one million exemplars since its foundation. By itself the Alfasud will almost equal this record, with 900,925 units produced between 1972 and 1984 (not to mention the Sprint versions). It became the best selling Alfa Romeo ever.

From production rationalization to Brand centrality

In 1986, IRI (state owner of Alfa Romeo since 1933) sold the brand to the Fiat Group – and, as in all industrial integration processes, the first years were devoted mainly to the rationalization of production and supply chains.
In the 1980s, the watchword for all carmakers was “synergies”. Process and product were increasingly standardized. Many components were shared for cost reasons. Designers were obliged to respect rigid constraints (such as the size of the doors), which smothered creativity.
In the following years, these rules were loosened. Customers disliked the excessive homologation, and began looking for more identifiable cars. The personality of the Brand resumed its lost importance, influencing public choices. This turning point changed the history of turn-of-the-century car design.

For Alfa Romeo, this meant a return to its origins. The first big step to relaunch the distinctive characteristics of the brand was to revive Alfa Corse, the glorious racing team where the young Enzo Ferrari had taken his first steps. In 1993, the 155 GTA participated in the DTM, the tourism championship in Germany, driven by Nicola Larini – who won by finishing first in 11 out of 20 races, carrying Alfa Romeo back to the top step of the Nürburgring podium for the first time.
The contribution of design was paramount. The 164 of 1987, the brand’s first front-wheel drive flagship, was designed by Pininfarina… but from that moment on, the role of the internal Centro Stile Alfa Romeo became increasingly important.
In Arese, technologies changed, people changed and the process changed. New computer-assisted systems were introduced for design and prototyping. The Centro Stile team was integrated with the design platforms, and participated in technological choices too – after all, what is functional must also be beautiful, and vice versa. Form and substance always go together: that’s the “necessary beauty” of Alfa Romeo.

The Centro Stile created not only the style of a model… it designed a complete range. And a few years later, the dream came true. In 1995, the brand brought an original two-volume (the 145) to the “C” segment, and the following year this was joined by the two-and-a-half-volume version (the 146). The GTV and Spider sports cars followed, created in collaboration with Pininfarina. But the real turning point came with the 156.
The style of the 156 was an extraordinary mix of strength, innovation andsophistication. The front shield reclaimed its dominance and projected its lines onto the bonnet. Seen from the front, the mudguards seemed “clamped on the wheels” flush with the bodywork, radiating strength and road grip. The relationship between glass and metal surfaces resembled a coupe more than a sedan. The rear door handles disappeared, integrated almost invisibly with the window frames, and the clean flanks highlighted the car’s sleek and dynamic profile. “It seems to be moving even when it’s still,” commented de’ Silva.
The 156 returned to the kind of chromatic research previously glimpsed in the Carabo and the Montreal. The Alfa Romeo designers found inspiration in the Museum collection, in the same building where it is today: observing the color of the 8C 2900 B of 1938 they invented “Nuvola” blue, obtained with a multiple layer mica effect that endowed the car with iridescent glints.

The 156 was an astonishing car from a technical point of view too. The designers had been asked to develop the concept of “advanced sportiness” by combining power, lightness and control. This has always been the formula expressing Alfa Romeo driving.
To achieve this goal, new materials were introduced (e.g. magnesium and “tailored blank” steels), highly refined suspension systems were designed (e.g. the high front quadrilateral), and particular care was devoted to mechanical tuning in order to enhance handling performance and trajectory precision.
The 156 convinced everyone: it was the most thrilling sedan to drive of its entire generation. The sporting version was a winner: in 10 years of Gran Turismo championships it won 13 titles.

The birth of the “common rail”

At launch there were six engines. The Busso V6 was accompanied by three “Twin Spark” engines which for the first time combined double ignition (a technology previously used by Giuseppe Merosi in 1914) with four valves per cylinder.
According to the logic of the European market at the time, petrol was the prevailing fuel; but these rules were about to change. And it was Alfa Romeo who launched the revolution: the 156 was the first car in the world to launch the “common rail” system.
Journalists testing the 1.9 and 2.4 JTD versions in Lisbon were amazed: for the first time, diesel engines were offering petrol-level performance, silencing and comfort.

“Car of the Year”

The 156 won the hearts of public and critics, and in 1998 delivered the international “Car of the Year” award to Alfa Romeo for the very first time. Its younger sister, the 147 (which shared not only the stylistic “family feeling” but also the base, suspension and engines) followed up a few years later, winning the same award in 2001.