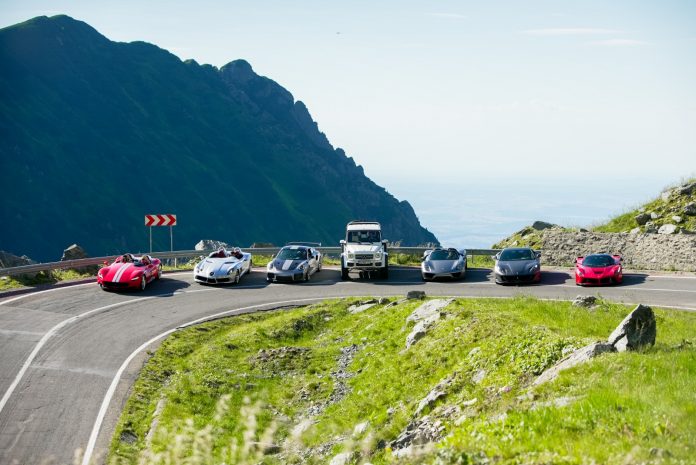 Țiriac Collection, the only private car and motorcycle gallery in Romania open to the public, has created a series of unique presentation materials featuring 9 exclusive models from Mr. Ion Tiriac’s personal collection. The materials will be used to launch the TikTok account of the car gallery, which will then be continued on other social media channels such as Instagram, YouTube or Facebook. The dedicated content will be available starting from August.

The aim of the project is to promote in an attractive way, on an international level, the cultural-educational value of the Țiriac Collection gallery to the target groups that use each social media platform separately and to unleash the performances of the cars from the collection on one of the most emblematic national and international roads – Transfăgărășan.

The SLR Stirling Moss is a limited edition of only 75 vehicles of the series, which uses a speedster styling that does not include roof or windscreen. The car’s top speed is 350 km/h with acceleration from 0 to 100 km/h in less than 3.5 seconds. The supercharged V8 engine is rated at 640 hp. The car was unveiled at the 2009 NAIAS (North American International Auto Show).

Out of the 75 units produced within the limited edition, the car gallery includes the no. 37 unit of the series.

Produced in 2014, the Ferrari LaFerrari is the first hybrid model with a power output of 963 hp and was built in an edition of just 499 examples purchased by carefully selected customers. Thanks to the huge technological leap represented by the HY-KERS system, the LaFerrari is the most powerful and efficient Ferrari ever built. This in turn was one of the protagonist models of the series of materials that will illustrate the content of the Țiriac Collection on social media.

Also the Porsche brand finds itself in the special lineup for this project. The Porsche 918 Spyder from 2015 was produced in a limited edition of 918 units. This particular car has an exclusive badge indicating that it is owned by Mr. Ion Țiriac.

The model is a plug-in hybrid with sporty flounces that goes from 0 to 100 km/h in just 2.5 seconds and reaches a top speed of 340 km/h. The Porsche 918 Spyder also holds the production car lap record of the Laguna Seca circuit, with 1:29.89.

The video productions will also feature the 2017 Porsche 911 GT2 RSII, the most powerful version of the 911 ever built by Porsche, offering performance worthy of a super sports car. The chassis, which offers motorsport-inspired features and outstanding cornering stability, enables the GT2 RS, to save important seconds on the race track. With a displacement of 3,800 cm3 , the engine produces an impressive peak power of 700 HP at 7,000 rpm.

The Mercedes-Maybach G 650 Landaulet is part of a limited edition of just 99 examples and is the first off-road vehicle from Mercedes-Maybach’s luxury division. This special G-Class is a unique combination of a luxury saloon and a special off-road vehicle. The car features personalised headrests with the inscription “Țiriac Collection” and a two-tone Designo Nappa leather interior in porcelain white. The car achieves a performance worthy of the most powerful engine in the range, with a maximum output of 630 HP.

Also, during the filming of the Transfăgărășan video production, the Ferrari 812 Superfast’s engine could not be missed, which in 2018 is considered the most powerful naturally aspirated engine introduced by a manufacturer for a production car. The power unit has a total output of 800 HP. For this car, Ferrari claims a top speed of 340 km/h and 2.9 seconds for acceleration from 0 to 100 km/h. The model was presented at the 2017 Geneva Motor Show and is considered the successor to the F12 Berlinetta.

Last but not least, the 2020 Ferrari Monza SP2 (F176) took part at the filming and, along with the other cars, it attracted all the admiration of the Transfăgărășan’s tourists. The Ferrari Monza SP2 is equipped with the most powerful naturally aspirated V12 engine ever developed by the Italian manufacturer. The 6.5-litre engine develops 810 hp at 8,500 rpm. The Italian model accelerates from The Italian model accelerates from 0 to 100 km/h in 2.9 seconds, the announced top speed is 302 km/h.

The Tiriac Collection gallery exhibits over 170 iconic models of the automobile industry produced from 1899 to the present day. Among them are vehicles that belonged to great personalities, limited series editions and high-performance vehicles that showcase both the history and the latest trends in automotive technology. The models are displayed in regular rotation and feature vehicles from Ion Țiriac’s personal collection of over 400 vehicles.

The car collection is open to the public from Friday to Sunday between 10:00 and 19:00 at the Otopeni location located in Calea Bucurestilor street no. 289, directly opposite to the Otopeni Airport.

As part of this special project, users of social media platforms that focus on automotive video content will have the opportunity to gradually experience the strong emotions and raw performance that the Țiriac Collection models previously displayed on the track that was declared the world’s most spectacular road 10 years ago.

The official social media accounts of the Tiriac Collection are as follows: