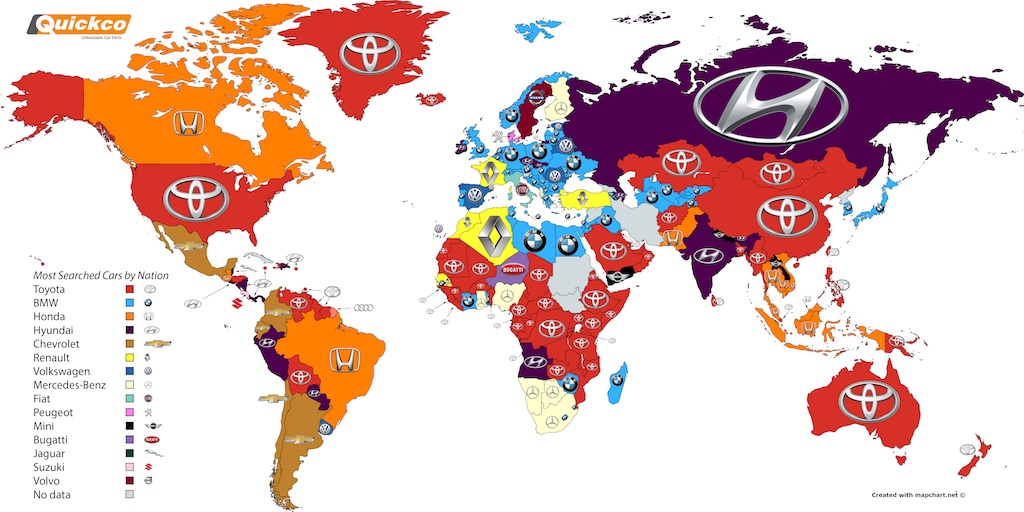 Ever wondered what is the most googled car brand in Ireland? Perhaps unsurprisingly, given its rapid rise up the sales charts, Hyundai took the honours for most searched for car manufacturer online in 2016.

A survey by car parts supplier Quickco set out to find the car brands that people around the world googled the most in 2016, taking in data from 193 countries worldwide – with some surprising results.

It wasn’t just Ireland that was busy looking for Hyundai products. Worldwide it was the third most sought for brand, topping the search charts in markets like Russia, the Czech Republic and India. Surprisingly though, it didn’t top the search list in its native South Korea – BMW took the honours there.

Globally though, Toyota was the most searched for car brand by some distance, topping the charts in 74 different countries. BMW was the second most popular with 51 countries making it their most sought after brand, ahead of Hyundai with 17. As you’d expect, there was as degree of national loyalty in certain car producing markets. BMW topped the search list in its native Germany, as did Renault in France, Volvo in Sweden and Fiat in Italy – the latter two were the only countries in which those brands topped the list. National allegiance didn’t always hold sway though. President Trump may be dismayed to find that Americans put Japanese brand Toyota top of their search lists, though ironically American brand Chevrolet was the most sought after immediately south of the border in Mexico – as well as in four other Latin American markets. And even in Japan, producer of many of the world’s leading brands, the most searched for car company there was German brand BMW.

For sheer optimism though, our favourite has to be Niger. The Western African landlocked nation  ranks among one of the world’s poorest countries, but nonetheless puts supercar brand Bugatti at the top of its most Googled car brands of 2016.