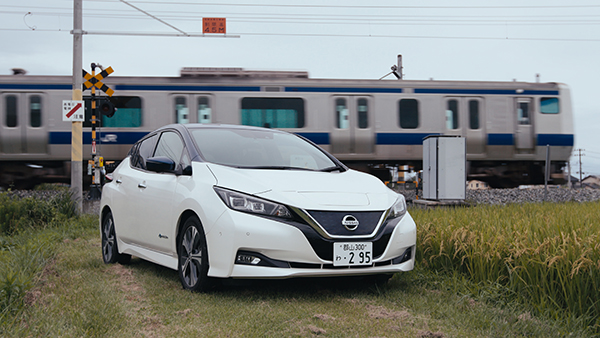 Trains and electric vehicles have more in common than you think. Both provide safe and convenient transport while expanding the possibilities of electric mobility. They also both contribute to the realisation of a sustainable society. Nissan is now developing an entirely new way to combine the technologies used in rail travel and EVs. East Japan Railway Company (JR East), one of Japan’s leading rail providers, is trialing the use of repurposed Nissan LEAF EV batteries in its railroad crossing devices. Efforts to replace the use of lead-acid batteries at emergency power supply units with repurposed Nissan LEAF batteries began in January at the Atago railroad crossing on the Jōban Line, which runs through Minamisoma City in the Fukushima Prefecture. Watch the video below to learn more about this partnership and how Nissan LEAF batteries are inspiring ideas for future ways to repurpose used EV batteries. Repurposing EV batteries
A Nissan LEAF’s lithium-ion battery retains 60-80% of its electricity storage capacity at the end of its life cycle in a car. By reusing used EV batteries, this remaining energy capacity can be directed elsewhere, such as into replacement vehicle batteries or stationary batteries. Nissan has partnered with 4R Energy Corporation on these efforts. By repurposing vehicle batteries, the CO2 emissions and resource usage associated with building a new battery from scratch can be reduced. On top of that, it adds additional value to EV batteries, leading to their wider adoption.

For Kaito Tochihara, assistant chief researcher at the East Japan Railway R&D center, when it comes to emergency power supply, switching from lead-acid to repurposed EV lithium-ion batteries promotes sustainability and leads to improved performance from the battery itself. “With lead-acid batteries,” Tochihara said, “we have to periodically visit railroad crossings to check the charging state of the battery and if there is any deterioration. However, with repurposed lithium-ion batteries, there is a control system attached, similar to an EV, so we can remotely check the battery’s status. This should lead to improved maintenance standards. This system also enables preventative maintenance by informing us of the battery’s status before its voltage becomes too low.”

Safety and security at railroad crossings
Tochihara further explained, “Railroad crossings are points of contact between trains and public roads, so they have to be extremely safe and reliable. At 4R Energy Corporation, we develop our repurposed lithium-ion batteries from batteries designed for cars. Similar to a railroad crossing, such batteries require a high level of safety and security. Their reliability gives us the confidence to carry on with our efforts.” Anticipating the widespread diffusion of EVs, the 4R Energy Corporation’s aim was to effectively use lithium-ion batteries even beyond their service life in vehicles. Each year the company’s factory in Namie, Fukushima Prefecture, receives thousands of used batteries, which they then repurpose.

In addition, the Nissan LEAF’s lithium-ion EV battery is designed to cope with various climates and conditions. This, Kinoshita says, “is a strength suited for railroad crossings in harsh environments.” However, before reused batteries can be fully deployed in railroad crossing devices, some remaining issues must be resolved.

The trials, which began in January of this year, will be tested in the autumn for the first time. “In autumn there are lots of lightning storms and typhoons. We will continue to analyse battery performance, building on promising initial results. We will also use feedback from those who maintain the railroad crossings, making them safer to use” said Tochihara. He also discussed the potential outcomes of this testing on reused batteries. “If we can confirm, in this trial, that repurposed batteries are safe for use on railways, then I think we can expect this initiative to be expanded. For example, in wireless communications equipment.”

The current electrification wave is propelling Nissan closer to its goal of carbon neutrality. As the use of EVs becomes ever more widespread, the availability of reusable batteries will also increase. Until recently, the idea that EV car batteries could be reused in electrified train crossings was unheard of, and the potential for used EV batteries doesn’t stop there. There are numerous other ways to repurpose the batteries for use in a safer, more sustainable future society.