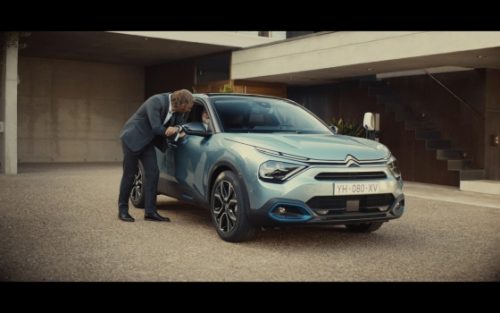 The scenario is a sort of return to the future… but from today, and 100% inspired by the pleasure of driving a hatchback like those that Citroën’s range has been offering since 1928. Like Proust’s madeleine, Citroën’s comfort has an impact on each generation.
The film showcases a father and son who experience the same feeling of comfort and character on board their new Citroën, some years apart. They cannot find the words to fully express themselves, so much so that they can only exclaim ‘Oh la la!’.
Released on social networks today, you can watch the film ahead of the commercial launch at the end of the year: https://bit.ly/3gNOF1z
Unveiled on 30 June this year, new C4 and ë-C4 – 100% ëlectric mark a new stage in Citroën’s product offensive and continues its electric offensive in 2020 in the segment of compact hatchbacks. A reinvented compact hatchback, a worthy successor to a line of bold hatchbacks which made their mark on their era through their comfort and character. Just a few days before the opening of orders, the film is released today on social networks.

With new Citroën ë-C4 – 100% ëlectric, drivers who love hatchbacks can benefit from the best in comfort (thanks in particular to Citroën’s suspensions with progressive hydraulic cushions®) and in technologies (with, amongst others, the coloured head-up display and the passenger’s retractable tablet support, the Smart Pad Support). It is worth noting that with the launch of new Citroën C4, Citroën is leaving the choice up to its customers: of course, the model exists in a 100% ëlectric version, but also in petrol and Diesel versions.

THE CAMPAIGN: MUSIC, AN ANTHEM.

The launch campaign for the new Citroën C4 is above all a song: Oh Happy Day. It is the anthem of the new worldwide advertising campaign engineered by Traction (BETC Group). An anthem to the freedom and the motoring passion which has been driving Citroën for over 100 years. An anthem to how Citroën has made high levels of comfort and technology more readily available. A celebration of the innovation which has marked Citroën’s history, and that we find today in New C4, one of the first models in its segment to exist in a 100% electric version.

It is also, however, the music of a golden age: that of the hatchback. Citroën has been creating iconic hatchbacks since1928, and it is also interesting to note that this year, we are celebrating the fiftieth anniversary of the Citroën GS, the hatchback par excellence, European Car of the Year in 1971.

The advertising film for New Citroën C4 is a sort of return to the future… but from today!

Produced by Thierry Poiraud (Insurrection Production), it showcases a man in the 70s/80s who has just bought a brand-new Citroën hatchback. His son, who is 7 or 8 years old, is just as spellbound by this new car as his father. He is so fascinated that he can only repeat ‘oh la la!’ as he discovers each new feature.

Then, many years later, it is the son, who has now become a forty-something, who has just bought Citroën‘s new 100% ëlectric hatchback: ë-C4. And this time, it’s the father’s turn to be spellbound by the design, the comfort and the technology of the most recent Citroën. And the only thing that he can also manage to say is… ‘oh la la!’.

By highlighting this key moment in the handover of our new vehicles, this campaign revives the desire for legendary hatchbacks, those which take us along all of life’s roads with all of those that we love.

This international campaign will be launched on TV in the European countries of launch at the end of 2020 before being rolled out worldwide in 2021. The film is available on social networks in a 45-second version, ahead of its 30-second TV version.

“Oh Happy Day” is a standard of the gospel repertoire, made famous by Edwin R. Hawkins at the end of the 60s, and which has been chosen to adorn the campaign. The track, with an irresistible positive energy, and sung by a gospel choir, was recorded for the occasion at the legendary Saint Germain Studios in Paris (which have seen some of the greatest voices, from the Rolling Stones to Christine and The Queens and also Coldplay). This brand-new version discreetly underlines the comedy with a lightness coloured with emotion, to better accompany this passing of the baton between a father and his son. A second brand-new version has been recorded to adorn another film which Citroën has in store in a few days’ time… so stay tuned!