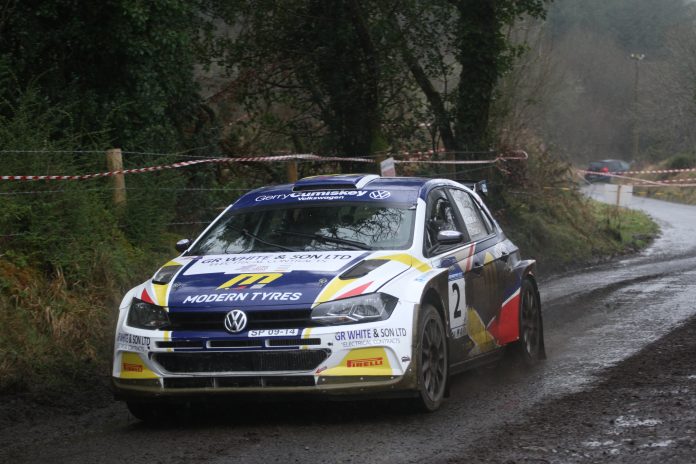 The Corrib Oil Galway International Rally 2022 is almost upon us and reverting to a two-day international rally seems to have paid dividends with an excellent entry received.

As usual the rally is the opening round of the Irish Tarmac Rally Championship, sponsored for the first time this year by Acesigns, and it is the time of year where drivers reveal their new and updated machinery. Over 140 entries have been received in the main field while a further fifteen juniors will take part from Sunday morning. Entries are still being accepted for anyone who still wishes to take part in the opening International Rally of the year.

Top seeds are Alastair Fisher & Gordon Noble whose last appearance on a rally was two years ago when they won the Galway International Rally, Fisher’s maiden international win in Ireland. Once again, the pair are in a VW Polo Gti R5, and Fisher will be looking to repeat the dominant performance of 2020. Callum Devine & Brian Hoy will provide stiff opposition from the number two slot, with a number of victories during the latter half of 2021 once rallying came back. Devine was the Cork 20 winner in a Ford Fiesta R5 and will relish the challenge. Number three seed Matt Edwards is certainly someone who likes a challenge, and he is hoping to tackle this year’s tarmac championship if funds permit. The multiple BRC champion is looking to attempt Galway in a Polo R5 and if all goes according to plan, will provide a huge test to the drivers in front of him having shown an impressive turn of pace on Irish roads in the past.

Welsh driver Meirion Evans with Jonathan Jackson on the notes as usual starts at four in another Polo R5, and as his experience of Irish tarmac has increased over the past couple of years, a first victory over here should not be too long in coming round. The highest seeded former Tarmac Champions Josh Moffett & Andy Hayes are at five in the lone Hyundai i20 R5 on the list, and after an inconsistent couple of years will be looking forward to regaining the form that saw them take the 2018 championship.

Jonny Greer at six is entered in a Citroen C3 R5, the only example on this event and he will be competitive as he has a lot of experience in Galway over the years. Cathan McCourt & Liam Moynihan (Fiesta R5) at seven are always quick and if they can get more consistency into their stage times could be up there challenging. Donagh Kelly reunites with his old co driver Kevin Flanagan hoping to get off to a good start to the Tarmac Championship. Galway was a springboard for the pair back in 2015 with a win setting them up for a successful championship campaign. 2014 Tarmac Champion and Galway winner Declan Boyle starts at 9 in a Ford Fiesta WRC and has James O’Reilly on the notes while Garry Jennings the 2013 Tarmac Champion who won Galway in 2016 & 2017 rounds off the top ten in his RHD Ford Fiesta R5. Rory Kennedy as usual calls the notes for the Fermanagh driver.

The quality doesn’t end there with Daniel Cronin, David Kelly, 2011 Galway winner Tim McNulty (making his first rally appearance in six years) and David Guest also among the list. The national rally is very well supported, and the likes of James Stafford, Gary Kiernan, Damien Tourish, Daniel McKenna, Kevin Eves and Declan Gallagher are just some of the names that will be jostling for the top spot by the end of the rally. Luke McCarthy, Ryan Barrett, Philip Wylie, and Duncan Williams are among those to have entered the Historic Rally and these are seeded into the main field and will complete the full route of fifteen stages.

There are fifteen crews entered for the Junior Rally, a marked increase on recent years and the Honda Civic is the car of choice for most competitors. The top seeds are Jack & Sean Brunton followed by Jack McKenna & Anthony McDonald with John Michael Kennelly & Eoin Corcoran completing the top three, all in Civics. The Juniors will get all of Sunday’s stages which is two stages attempted three times.