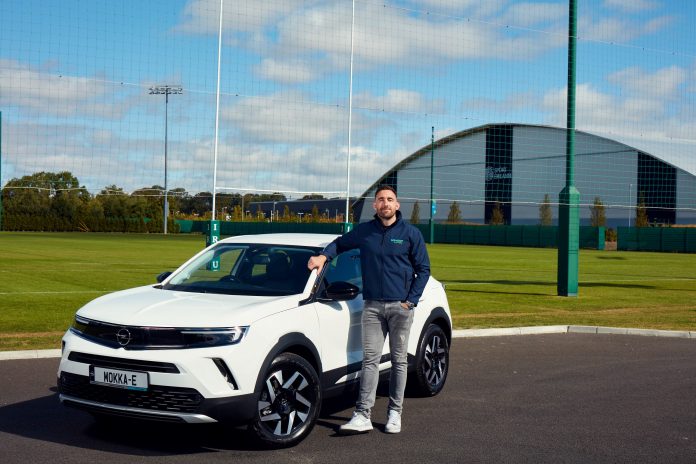 Irish rugby star, Jack Conan, has been appointed a Windsor Opel Brand Ambassador and presented with a new Opel Mokka-e. Opel is a proud sponsor of Irish Rugby and the official car partner to the IRFU and the appointment of Jack Conan as a Windsor Opel Brand Ambassador, is a natural step for both Opel and Windsor Motor Group, as they continue to support rugby in Ireland.

Jack Conan has been a powerful force in the Leinster and Ireland back row from the moment he burst onto the scene in 2014. Since making his Leinster debut in 2014, Jack has made over 100 appearances for his province, where he has won 4 PRO14 titles and a European Champions Cup. The Bray native also toured with the British and Irish Lions for the first time in South Africa in 2021.

Jack has played 30 test matches for Ireland and was part of the winning Six Nations and Grand Slam team in 2018. He played an integral role in the winning Ireland team that made history earlier this year by beating the All Blacks in New Zealand, for the first time.

Speaking at the presentation of his new Opel Mokka-e at the IRFU High Performance Centre, Jack Conan said: “I’m thrilled to drive the new Opel Mokka-e and to become a zero-emissions EV driver. It is more than spacious for a big guy like me and I love that it can do over 320 kilometres on a single charge. I don’t travel lightly and it has plenty of room for all the kit that I carry to training. There’s also lots of space for my dog Riley, so I’m looking forward to taking in some road trips with him too.”

Peter Nicholson, Managing Director at Windsor Motor Group said: “We are delighted to welcome such a sporting name to the Windsor Motor Group family. Windsor is well known for supporting Irish Rugby and we look forward to working with Jack Conan as a Windsor Opel Brand Ambassador to promote the Windsor Deansgrange Opel and Windsor Liffey Valley Opel dealerships.”

He continued: “This is an exciting time for Opel. The brand embarked on a clear growth trajectory some 18 months ago, bolstered by a rejuvenated product portfolio. The all-new Opel Astra and Grandland have been just launched to tremendous reviews and together with our best-selling Corsa, the practical Crossland and gorgeous Opel Mokka, Continental Irish Small SUV of the Year 2022, they have significantly raised our profile in terms of our passenger car portfolio and an extensive range of all-electric vehicles, both passenger car and light commercial vehicles.”

“We pride ourselves in providing our Opel customers with the widest choice of vehicles and highest levels of sales and aftercare service so that they can drive happy,” he added.