Home Feature Landmark Year for CUPRA in Ireland in 2022 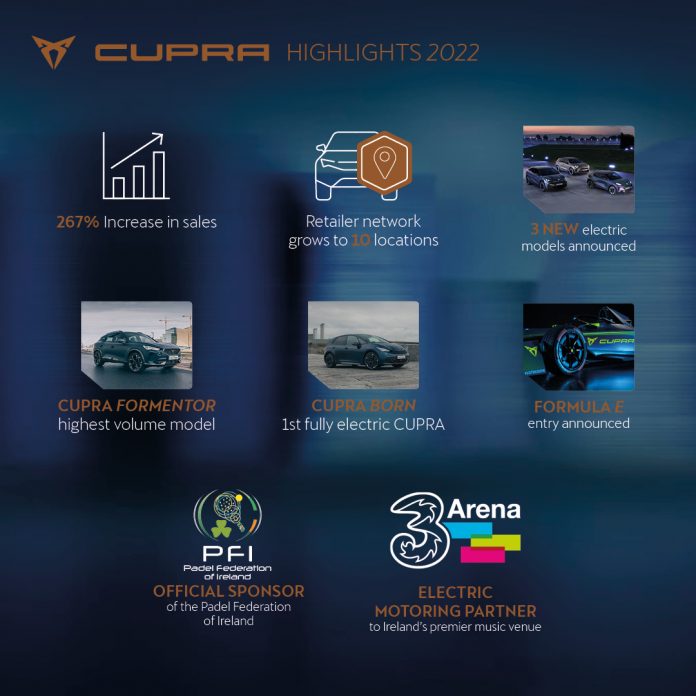 CUPRA enjoyed another landmark year in Ireland during 2022, setting a new sales record and passing several milestones in the process. Sales were up a staggering 267% on 2021 as Irish motorists flocked to the brand in record numbers. CUPRA has now enjoyed four consecutive years of exponential growth since launching to the Irish market in 2020.

The highly-acclaimed CUPRA Formentor compact SUV was the best selling model with sales up an incredible 252% on last year with 521 units. Meanwhile, the arrival of the CUPRA Born, the marque’s first all-electric vehicle, proved a seminal moment for the brand on its journey to full electrification.

Overall, new car sales in Ireland increased marginally in 2022 but still lagged 10% behind pre-Covid levels. CUPRA bucked the trend with registrations up 267% in 2022 compared to 2021, making it the fastest growing car marque in Ireland by a considerable margin.

Motorists gravitated towards the convention-challenging marque in record numbers over the past 12 months. The award-winning Formentor led the way with 521 sales, accounting for nearly 80% of overall sales, followed by the Born on 126 sales. CUPRA’s model offering expanded to four models, with the Leon hatchback and Sportstourer and the Ateca SUV completing the line-up. Demand far outstripped supply as the war in Ukraine and global supply problems relating to the pandemic continued to hit the industry. CUPRA is hopeful supply issues will ease in 2023.

CUPRA built upon its successful foundations in 2022 by expanding its network of Irish retailers to 11. Whether through word of mouth or a succession of glowing reviews, CUPRA has rapidly become one of the hottest brands in the motor industry. The addition of strategically-located CUPRA retailers in all major urban areas allows customers to maximise choice and convenience while ensuring top quality service at any of our handpicked retailers.

Journey to electrification under way

With a strong portfolio of petrol, diesel, plug-in hybrid and electric powertrains; CUPRA meets the needs of every motorist no matter where they live or how far they travel. The brand has already started its journey towards full electrification and Irish motorists have been quick to adopt cutting edge technology. Figures for 2022 reveal nearly one in three CUPRAs sold last year were electrified and that figure will expand as more electric models arrive to market.

Partnering with leading players in 2022

CUPRA Ireland announced two important new partnerships last year in keeping with its profile as an exciting young brand for enterprising people. It teamed up with iconic Dublin concert venue the 3Arena and signed a deal to become the official sponsor of the Padel Federation of Ireland.

Music and sport are at the heart of the CUPRA mind-set and these two important tie-ins strengthen the brand’s association with both fields. The 3Arena has played host to some of the world’s biggest acts and having it as our official electric partner means up to one million potential customers a year are exposed to the CUPRA brand, its groundbreaking hardware and its ambitions for sustainable mobility.

Padel is a relatively new sport in Ireland, having originated from Mexico in the 1960s. Combining elegance, agility and performance, it is a perfect match for a car brand that majors on all three. In becoming proud sponsors of the Irish national senior, junior and veteran teams, CUPRA hopes to spread the word about one of Europe’s fastest growing and most exciting sports here in Ireland.

Commenting on another year of milestones, SEAT & CUPRA Ireland Brand Director, Niall Phillips, said: “We’ve been really encouraged by the surge in demand for CUPRA by customers in Ireland and the significant interest we’ve seen from investors looking for this lucrative franchise. I want to thank our customers and our dedicated CUPRA team for making our brand a massive success in Ireland in 2022”

Despite a busy 2022, no one at CUPRA is resting on their laurels. The brand has just begun its journey and will continue striving towards its goals in 2023. CUPRA Ireland’s 231 sales offering includes finance offers on all CUPRA models, starting from a highly competitive 6.9% PCP Finance with monthly payments starting from just €339.

Getting the right Formula in 2023

Starting from the 2023 season, CUPRA will team up with German tuning and motorsport company ABT in ABB FIA Formula E – the world’s first all-electric FIA World Championship and the only sport that has been net-zero certified since its inception. This exciting move marks the next big step in CUPRA’s development as it bids to become fully electrified by 2030.

CUPRA buyers tend to be passionate about performance and sustainability so this is a match made in racing heaven. CUPRA already collaborates with ABT on Extreme E – the FIA-sanctioned international off-road racing series that visits locations under threat from climate change – so this was a natural progression for both brands. Team drivers Robin Frijns (Netherlands) and Nico Müller (Switzerland) are already in place for next season while Mahindra Racing will supply the powertrain technology.