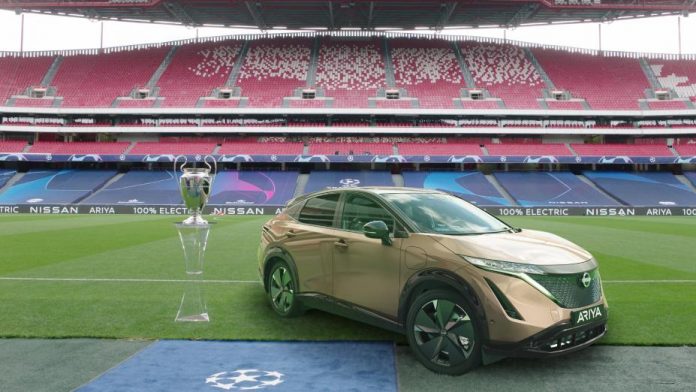 With fans unable to attend this year’s game in person, Nissan is setting up a drive-in cinema for 50 LEAF owners, whose cars will be parked in team formation facing a giant screen, bringing them closer to the action while still maintaining social distancing. The watch party will take place at a secret location communicated only to the selected fans, each of whom can bring a guest.

Nissan is in its sixth season as the official automotive sponsor of the UEFA Champions League, the world’s largest annual sporting event.

“For six seasons now, we have been electrifying the UEFA Champions League Final,” said Gareth Dunsmore, Vice President for Marketing Communications, Connected Car Services and Customer Experience at Nissan Europe. “This year, we felt even more motivated to add to the excitement of the event.

“Nothing can recreate the excitement of being in the stadium, but we hope we can give our LEAF owners the next best thing.”

In addition to hosting the watch party, Nissan will parade the UEFA Champions League trophy through Lisbon to Estadio Da Luz aboard its electric performance car, the Nissan LEAF NISMO RC.

The final will also be the first major event to feature the new Nissan brand logo, unveiled just weeks ago alongside the all-new Nissan Ariya electric crossover. Both the new logo and the Ariya will take centre stage during Nissan’s activities throughout the weekend in Lisbon, the European Green Capital for 2020.

With more than 5,000 LEAFs on the road in Portugal since its launch in 2010, Nissan EV drivers in the country save more than half a million tonnes of CO2 every year.