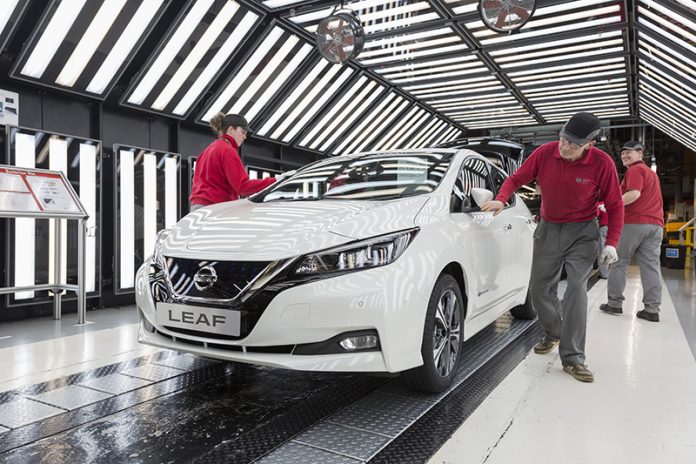 Nissan’s drive towards carbon neutrality is continuing at pace after the 100% electric LEAF overtook Bluebird production at the company’s plant in Sunderland.

The production of Bluebird totaled 187,178 units from 1986 to 1990. When production ramped up it took over 22 hours for each Bluebird to be build. Now, 35 years later, the outstanding improvement in manufacturing technology has reduced the production time to 10 hours for the Nissan LEAF and 195,380 units have been manufactured.

Alan Johnson, Vice President Manufacturing, at Nissan Sunderland Plant, said: “Bluebird was an iconic model for the plant and evokes fond memories among all Nissan enthusiasts.

“LEAF volumes overtaking Bluebird shows how dramatically our manufacturing innovation, skills and processes have evolved as we drive towards electrification.

“LEAF overtaking Bluebird is a landmark – but there are many more to come for our team at the plant as our electrified line up grows.”

Switching from wheel nuts and carburetors to electrical architecture and cyber security, Nissan’s unrelenting commitment to quality has not changed. The number of staff employed at the Sunderland plant has grown from 430 in 1986 to 6,000, with 19 staff who started in ’86 still working today on Nissan LEAF.

The first car off the line, Bluebird Job 1, is the centerpiece of a local museum display commemorating the significance of that first vehicle. Nissan LEAF has already written its name into the history books with the 500,000th LEAF recently produced in Sunderland.

Nissan has set itself the goal to achieve carbon neutrality across the company’s operations and the life cycle of its products by 2050. As part of this effort, by the early 2030s every all-new Nissan vehicle offering in key markets will be electrified, as well as introducing innovations in electrification and manufacturing technology.

The company recently announced plans for a major expansion to renewable energy generation at its record-breaking plant in Sunderland, UK with a proposed 20MW solar farm extension.

If approved, the 37,000-panel extension would result in 20% of the plant’s energy coming from all onsite renewables, enough to build every single zero-emission Nissan LEAF sold in Europe.