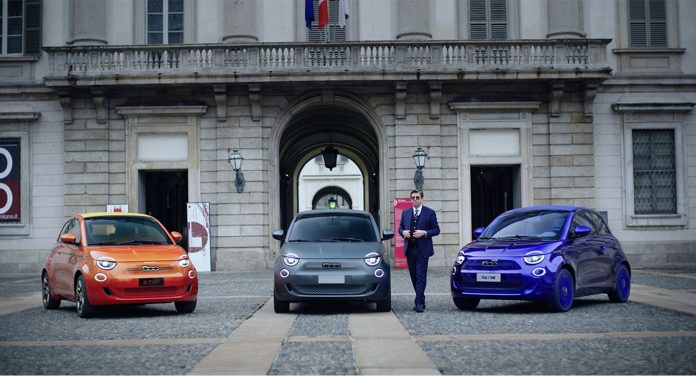 “One-Shot”: Fiat’s first docufilm is now on air, looking “behind the scenes” of the creation and presentation of the One-Offs, the three exclusive interpretations of the New Fiat 500, by Armani, Bvlgari and Kartell.
The film is narrated by Olivier François – President, Fiat Brand Global and FCA Chief Marketing Officer – who takes the viewer through interviews with designers, testimonials from partners, and close-ups on the details and selection of sustainable materials.
“One-Shot” can be viewed at this link.

“You never get a second chance to make a good first impression.” In these words, Olivier François – President, Fiat Brand Global and FCA Chief Marketing Officer – explains how the debut of the New 500 should be considered as a milestone in the automotive industry, putting the New 500 in its rightful place.

The same words open Fiat’s first docufilm, dedicated to the three masterpieces. These timeless paragons were created on a breathtaking six-month “journey,” from the first encounters with our partners at the Fiat Style Center in Turin to their launch in Milan this March.

This is the strategy underlying the “One-Off” project and its unique and exclusive models produced in conjunction with three iconic “Made in Italy” companies: Armani, Bvlgari and Kartell.

The short film presents a relentless succession of meetings and processes that highlight teamwork, the affinity between designers from different fields and the emotions involved in playing an active role in an extraordinary project: the creation of something unique, an interpretation of the New 500 alongside the very best of “Made in Italy”.

The result is the three One-Offs, embodiments of the style, creativity and craftsmanship characteristic of “Made in Italy” and of our partners in the project, in the path and in the vision of the Earth’s future. Sustainability needs to be combined with excellence in know-how, in creativity and in innovation.

Guiding the viewer on this “journey,” Olivier François – the charismatic “director and helmsman” of the One-Off project – narrates the creative act from which these three unique pieces sprang.
The journey began in Turin, cradle of the Fiat brand, passing from Rome on the way with its sunsets, colors and lines that symbolize Bvlgari all over the world, to arrive in Milan, the world capital of fashion and design, due in no small part to Armani and Kartell. The twist in the tale has Milan as the setting for the entire presentation of the New 500.
A veritable gearshift takes place in the film’s account of the tense time when the Geneva International Motor Show was canceled, and a plan B had to be found and set in motion. The presentation of the New 500 and the One-Offs was completely rewritten to pull up stakes, to Milan.

“One-Shot” can be viewed on Fiat’s social media channels, on YouTube, Facebook and Instagram. The evocative 15-minute short was created and produced by VICE Italy, with Rockets at the helm. It uses the language of documentaries to reveal aspects normally concealed from the general public, in an immediate and effective way.

In an authentic, realistic vernacular, the evocative docufilm opens the doors of the Style Center in Turin to the cameras. We get an exclusive peek inside the “Color & Material” department led by Rossella Guasco, halfway between a sophisticated research center and an elegant fashion atelier. The footage documents their almost-obsessive attentiveness to every detail, that “know-how” typical of Italian creativity, and dwells on the emotions of the whole team as they experience something truly unique. The journey continues in an interview with Klaus Busse, Head of Design, explaining what lies beneath the creative process of style and forms, and the role of the 500 in the history of industrial design, even more so in the collective unconscious. It was the Style Center that took a legend of the 50’s, the fabled “Cinquino”, and reinvented it in 2007 to “color” everyday life and streets all over the world, making it an authentic, unique and salient response to the requirements of international urban mobility. At the Milan launch of the One-Offs in March, it was even announced that the Fiat 500 has been confirmed as an “Italian Icon and Honorary Member” of Altagamma, the prestigious Foundation that brings together the best of Italy’s companies, to promote the epitomes of the country’s excellence around the world.

Now, in 2020, a new era is coming, and it is time for the Fiat 500 to utilize all its popularity to inspire change and become part of the solution. But the path of change cannot be taken alone. We need partners with an equally positive outlook, who want to get involved in improving the state of the Earth, by sharing values and goals. This is the natural habitat for the three spectacular One-Offs, serving as testaments to the extent sustainability and the desire to get right into improving the Earth are now so strong. Companies such as Armani, Bvlgari and Kartell, symbols of Italian excellence around the world, have shared in the New 500 project, to breathe life into this sea change, by creating three unique models to celebrate the arrival of the first FCA car that is full electric from the outset.