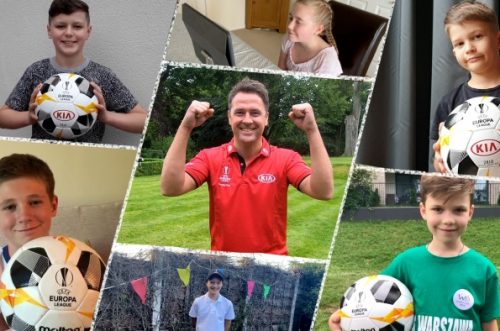 Kia Motors Corporation and UEFA have announced that the ‘UEFA Europa League Trophy Tour Driven by Kia’ has successfully completed its second year, amassing more than 2,000 pairs of football boots over both seasons for donation to children living in the Za’atari refugee camp in Jordan.

As with the first season, the Tour had planned to visit local schools, grassroots football clubs and famous urban landmarks in various cities across Europe, joined by former professional footballers who serve as local event ambassadors. Following two successful stops in Frankfurt and Barcelona, the Tour came to an unexpected halt due to the COVID-19 pandemic.

To ensure the children at future planned stops did not miss out, Kia and UEFA made the decision to host online football classes to allow the campaign to continue and fulfil its aim to collect football boots. Following guidance from the local ambassador, each participant recorded themselves performing a set of football skill challenges and sharing their dreams with the children of the Za’atari refugee camp.

“The digital transformation of the Trophy Tour during these unprecedented times has shown that when challenged, we can continue to dream and give hope to the children at the Za’atari refugee camp. Every child deserves to dream, and this campaign has shown that football really does have the power to keep the passion alive during a difficult time – it is a fantastic cause and one we are proud to be a part of,” said Guy-Laurent Epstein, UEFA Director of Marketing. “I would like to extend our thanks to everyone who has been part of this campaign.”

In partnership with the UEFA Foundation for Children, Kia Motors and UEFA are currently organising the handover of the donated boots to the children at the Za’atari refugee camp in the coming months, along with a personal message from Trophy Tour global ambassador, Michael Owen. Once football activities are able to resume at the refugee camp, these boots will enable the children to play the world’s most beloved sport.

Former England footballer, Michael Owen, the global ambassador of the 2020 UEFA Europa League Trophy Tour, encouraged fans to donate their boots and visit the trophy at each of the tour stops. Each of leading former footballers such as Thomas Berthold, Eric Abidal, Francesco Totti, Rafael Van der Vaart, Patrice Evra and Jerzy Dudek represented one of the six European cities comprising the Tour: Frankfurt, Barcelona, Rome, Amsterdam, Manchester and Warsaw.

“I am delighted to have seen so many people get involved in this year’s UEFA Europa League Trophy Tour Driven by Kia. It’s amazing to see what we can achieve when coming together for a common goal,” said Michael Owen. “When I was young, I used to dream that one day I would play football for my country. I cannot wait to see how much of a difference the donated football boots make to the children of Za’atari.”

Artur Martins, Head of the Global Customer Experience Division at Kia Motors Corporation, said, “This year has been very tough due to the COVID-19 pandemic, so I feel proud that the UEFA Europa League Trophy Tour Driven by Kia was able to conclude with such success. I would like to thank all of the participating children, their families and our communities of football fans across Europe who have supported our initiative this year.”

He added, “While donating football boots to these less fortunate children is important, we hope we can also continue to empower them to always follow their dreams.”