Home Feature Volkswagen gains some 70,000 new customers with best-selling ID.3 in the first... 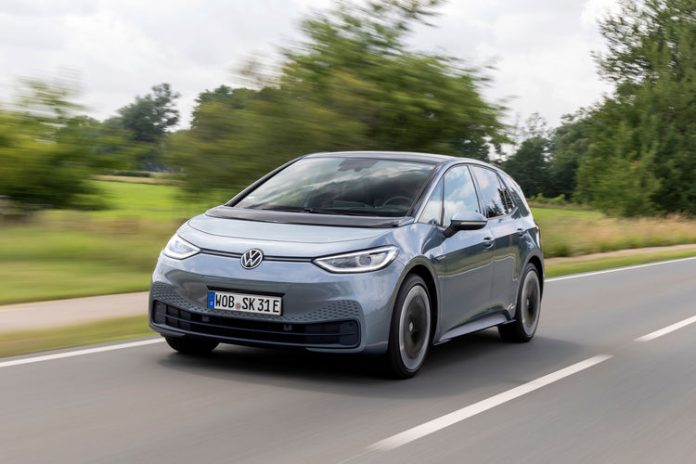 Strong performance of the all-electric Volkswagen ID.3 after its first year in the European market: “The car is an absolute hit. It appeals to customers and has shot from zero to take top positions among new registrations in a large number of countries,” says Klaus Zellmer, Board Member for Sales, Marketing and After Sales at Volkswagen. By the end of September, the car had already been ordered around 144,000 times in Europe – 50 percent of buyers had not driven a Volkswagen before and were new to the brand, found a study commissioned by the company. “The ID.3 has tapped into an above-average number of new buyer groups for Volkswagen. Some 70,000 new customers are strong proof that we are exactly on the right track with this vehicle and our electric mobility strategy,” continues Zellmer.

For comparison: On average, the ratio of new customers for other Volkswagen models is around 36 percent. In the first half of 2021, the strong demand for the ID.3 and other ID. models made Volkswagen the market leader for battery-electric vehicles in Europe within a very short time. In August, the car was the most popular electric car in many markets including Germany, the United Kingdom, Ireland, Austria and Switzerland. Based on new registrations, the ID.3 also ranked top in Western Europe overall in August. In order to meet the strong demand, some 1,200 of the best-selling electric cars are leaving the production lines in Zwickau and Dresden every day, with Zwickau operating three shifts on both production lines. Moreover, production for the local market has started in Anting in China – the car will be launched on the Chinese market in the fall of this year.

Volkswagen recently surveyed its ID.3 customers in Germany about the reasons for their purchase and their user behavior. The main criteria for buying or leasing an ID.3 were environmental performance (60 percent) and innovative technology (51 percent). Another important criterion for customers was the personal support provided by Volkswagen’s dealer and service network.

For almost 80 percent of German customers, the ID.3 is the most frequently used vehicle in their household. “This underscores that the vehicle is highly suitable for daily use,” comments Silke Bagschik, Head of Sales and Marketing, Product Line e-Mobility. For most users, charging their vehicles at home is already fully carbon-neutral. Around 70 percent of them use only green electricity, either from their own photovoltaic system or from their electricity supplier – and increasingly from the new Volkswagen Naturstrom Connect. Given the fact that ID.3 production in Zwickau and Dresden is also net carbon-neutral, “we’ve come a very big step closer to achieving our goal of net carbon-neutral mobility,” according to Silke Bagschik. The ID. family therefore makes an important contribution to the success of the Way to Zero. At the heart of the Way to Zero is the brand’s new ACCELERATE strategy aimed at stepping up the pace of the electric offensive. The goal is the full electrification of the new vehicle fleet. By 2030, at least 70 percent of all Volkswagen’s unit sales in Europe will be all-electric vehicles – that’s substantially more than one million vehicles. In North America and China, the share of electric vehicles in sales should be at least 50 percent. In addition, Volkswagen will be launching at least one new electric car each year.