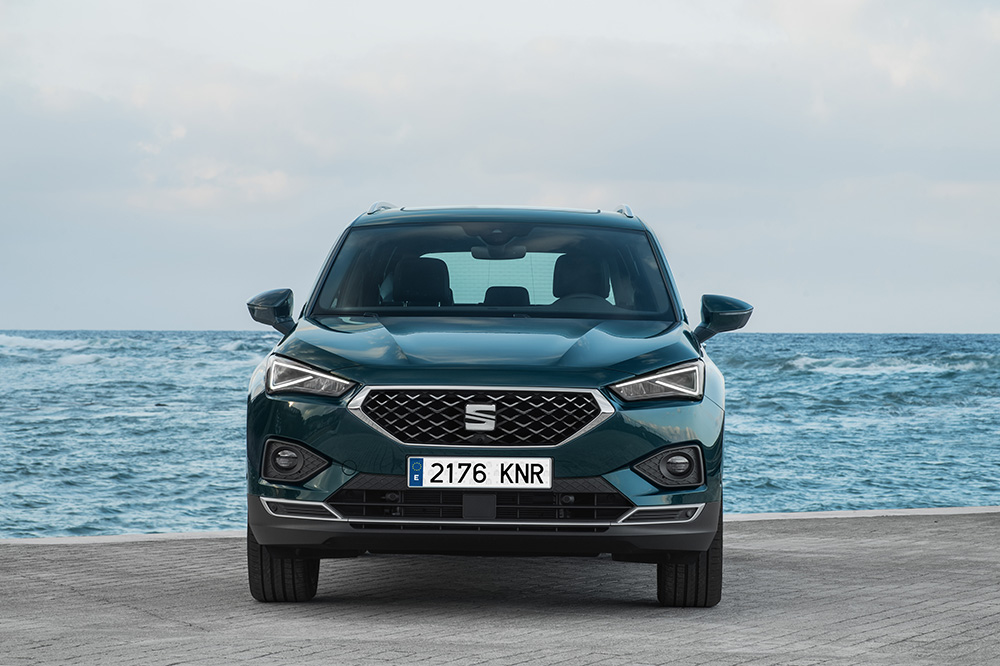 Available as a five or seven seater, the Tarraco shares its MQB-A LWB platform with the Škoda Kodiaq. Keen selling points include competitive pricing and generous specification across all models. It’s designed in Spain but manufactured in Volkswagen’s Wolfsburg plant. The Tarraco is offered in two trims with prices starting from €34,700 RRP for the SE range, and €39,885 RRP for the Xcellence range. A walk of just €1,000 makes it likely that most buyers will opt for the seven seat model, however like virtually all such cars in this category. those third row of seats are really only suitable for children over short distances. Interior space is generous. If you’re not using the third row you can slide and recline the second row of seats to create ample room to accommodate five adults comfortably. The other consideration is that boot space for the seven seater drops from 760 litres to 700 litres. The interior has a fresh design, though the signature hard lines and sharp angles mean you’ll still know you are in a SEAT. What stands out is the centrally mounted 8” floating infotainment display complementing one of the key selling points – the Digital Cockpit which is offered as standard across the range. This allows you to switch between three different displays including a comprehensive sat-nav view. Although they are starting to become more common, they still have a wow factor and help make the car feel more upmarket. Engine wise the car is launched with a choice of 1.5 and 2.0 petrol and 2.0 litre diesels, with 150PS or 190PS power outputs. The 150PS petrol is available only with a manual gearbox and  front wheel drive, whereas the 190PS features seven speed DSG auto transmission and 4Drive all wheel drive.

You can choose between FWD / manual gearbox or 4WD / auto gearbox with the 150PS diesel whereas the 190PS version is 4WD / auto transmission only.

2020 will see both a sporty FR version and a plug-in hybrid model with an anticipated 50km electric driving range.

At the international launch in Spain last week, only the more powerful versions with DSG were available to drive. Our clear preference of the two was the petrol engine which more refined,  eager to go, and considerably quieter.

In comparison the 190PS diesel felt surprisingly lethargic for all its horsepower, and notably noisy under acceleration. Whether that will equate to similar findings on the 150PS cars which are likely to account for the majority of sales here remains to be seen.

We should also point out that neither engine proved particularly economical. While you can’t make a definite statement based on a launch test drive, it was fairly typical driving and the figures obtained – the petrol averaging 8.8l/100km (32 mpg) and the diesel 8.1 l/100km (34.8 mpg) – are thirsty enough.

Ride and handling wise, it performs pretty much as you’d expect, gripping fairly strongly and with not too much body roll. Four wheel drive versions come with six driving modes and front wheel drive models with four, though switching between Comfort and Sport modes didn’t seem to change an awful lot other than gear changes happened at higher revs in Sport mode.

What will appeal is the specification. The entry level SE trim comes with 18” alloys and LED headlights as standard, as well as the aforementioned Digital Cockpit. That in itself will make the Tarraco an appealing prospect up against the large number of rivals now competing in that segment.