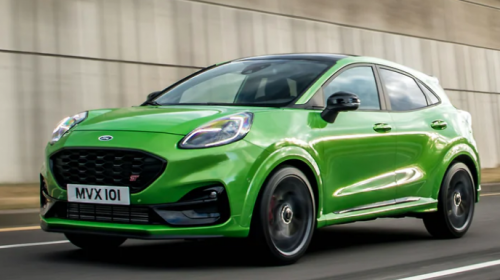 Such is the popularity of crossover SUVs, it’s not surprising that manufacturers are seeking to  capitalise further by producing sporty versions. Even if the idea of doing so is a bit incongruous – after all, hot hatches and sporty derivatives are defined by being fun to drive, while even the most enthusiastic advocates of crossovers will struggle to justifiably claim that handling is a pre-eminent attribute of these high riding machines.

Still, it’s hardly unexplored territory, as high risers from the original Range Rover Sport to assorted Audi SQ and BMW X Series M models can testify. And if anyone can make a silk purse out of the proverbial sow’s ear, it is Ford. The Blue Oval has consistently produced some of the finest affordable handling cars of the past twenty years including icons such as various generations of the Focus RS and the current Fiesta ST.

Plus it’s not as if the standard Puma is a sow’s ear to start with. In its bread and butter format, it’s certainly one of the more driver-centric crossovers currently available. If it lacks the ultimately pin-point steering precision of a Fiesta or Focus, it still handles better than many regular hatchbacks from rival manufacturers

With rumours persisting that the next-generation Ford World Rally Car to emerge from Malcolm Wilson’s M-Sport operation in Cumbria will be based on the Puma rather than the current Fiesta model, it also makes a lot of sense for Ford to offer a sportier version of its popular compact SUV.

So we get the Puma ST. With a 200PS 1.5 litre EcoBoost petrol engine that propels the car to 100km/h from rest in 6.7 seconds, it falls into the ‘warm’ rather than ‘hot’ category of performance.

However it’s the other modifications to the standard Puma that will make the ST appeal to the keen driver. Such as a limited slip differential (unique in this segment), Torque Vectoring Control, a steering rack that’s 25% faster than that in the regular Puma, and a rear suspension that’s 50% stiffer. Notably that suspension is also 40% stiffer than that on the Fiesta ST with which it shares many of its underpinnings.

In a nod to the varied uses a car like this is likely to have, there are Sport and Track modes, but also an Eco mode to maximise fuel efficiency.

Visually there’s enough to make it stand out as different to the regular car without appearing garish (unless of course you opt for the rather striking Mean Green pictured here that’s exclusive to the ST). There’s a Ford Performance embossed front splitter plus a unique diffuser at the rear, as a well as a rear roof spoiler. 19” alloys are standard.

Inside, driver and passenger are well supported by body-hugging Recaro sports seats while you get Ford Performance skid plates, a flat bottomed steering wheel and an ST gear knob to distinguish it from regular Pumas.

We’ll have to wait for another day to test the Puma ST’s handling capabilities as a brief drive in Dublin City Centre provided no opportunity in this regard. That said, it does feel a taut package that wouldn’t be afraid to be chucked into a corner. Acceleration is brisk rather than startling. The six-speed gearbox is slick, the engine emits a pleasing if artificial growl, and you feel at one with the car securely ensconced in those bucket seats.

In short, the Puma ST would appear to tick most if not all of the boxes to be part of Ford’s lauded ST family.

Priced from €41,813 (excluding delivery and related costs), the Puma ST is on sale in Ford dealerships now.