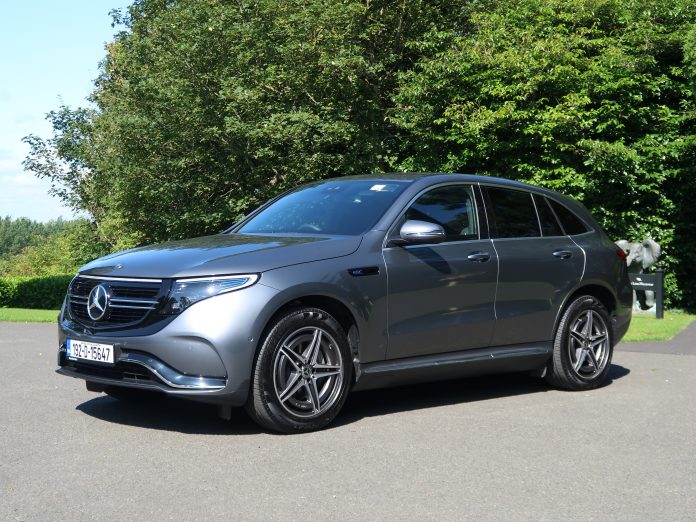 More than 130 years after Karl Benz invented the world’s first motor car, there is a feeling that the launch of Mercedes-Benz’s first fully electric passenger car will mark an equally significant milestone in the company’s lauded history.

The new Mercedes-Benz EQC’s relevance isn’t likely to be in sales volumes – with a price starting at €89,450 excluding government grants, annual Irish sales of the mid-sized luxury crossover SUV are unlikely to reach three digit figures. Rather it’s the fact that this new model certainly isn’t a toe dipping exercise into electric motoring by Mercedes-Benz. The company is firmly gearing up for an emission-free future, investing €20 billion in electric cars and batteries, with six new battery factories to be opened in the next 4-5 years.

By 2025 Mercedes-Benz has committed to having more than 50 electrified models, with 10 purely electrically driven vehicles to be launched by 2021. Indeed independent analyst PA Consulting says Mercedes-Benz is expected to overtake Tesla to become the market leader in EV production as soon as 2021.

Among the models we will see joining the GLC-based EQC in the next couple of years are the recently unveiled V-Class derived EQV, two smaller models, the EQA and EQB based on the GLA and forthcoming GLB crossovers, and versions of the flagship E-Class and S-Class saloons, the EQE and EQS. 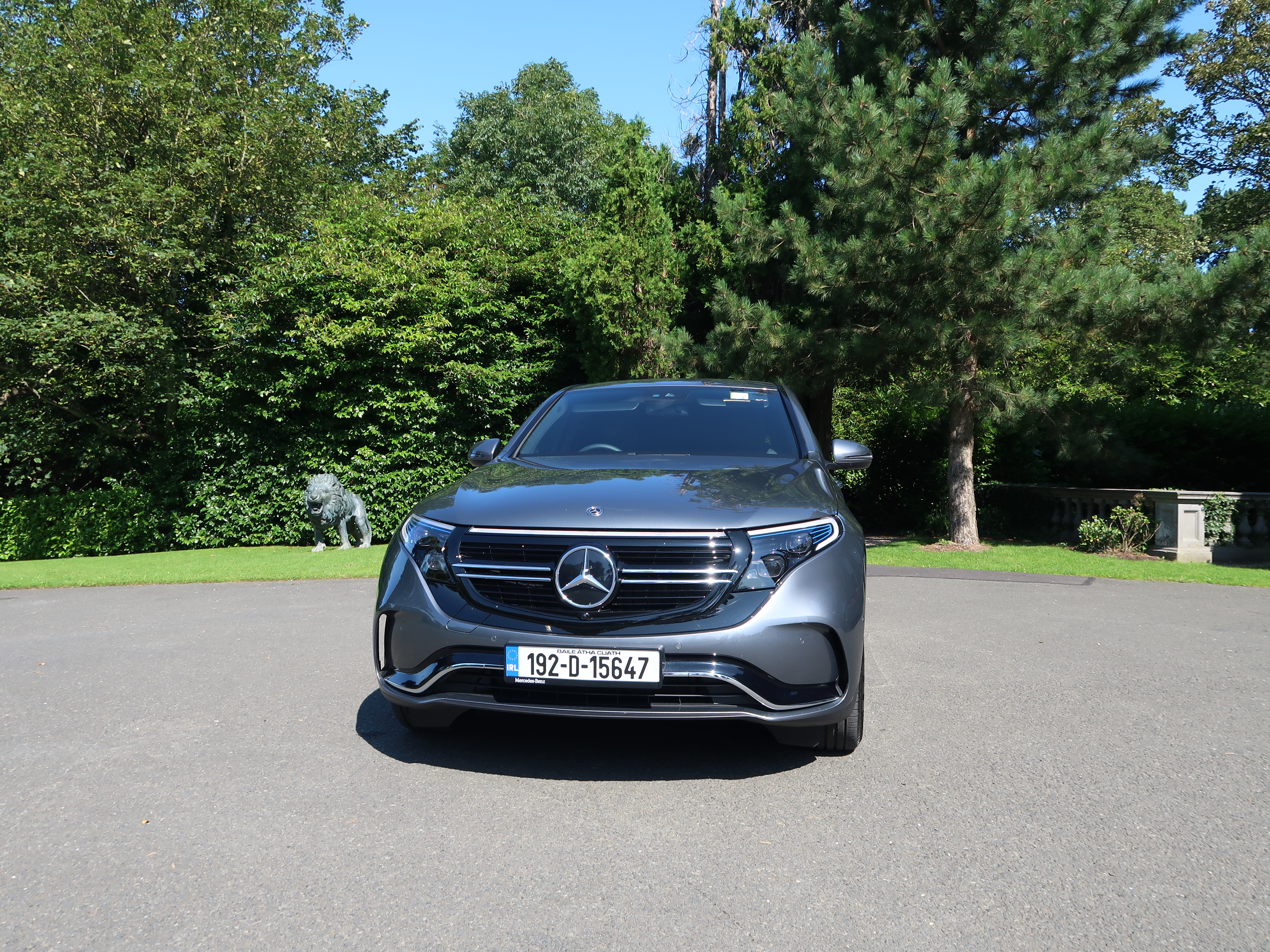 The EQC features a lithium-ion 80kWh battery that comes with an 8-year warranty. It provides power to all four wheels via electric motors at the front and rear axles and delivers a generous 408hp and 765Nm of torque. That’s enough to propel the EQC to 100km/h from rest in just 5.1 seconds.

Of the all-important range, it’s pretty respectable – between 375km and 417km depending on driving conditions as measured under the new real world WLTP standard (or 445-471km under the old NEDC measurement).

In theory it’s possible to fast-charge the battery from 10% to 80% in just 40 minutes, though you’ll need a powerful DC charger to achieve this – the EQC can be charged with a maximum output of up to 110 kW. Install a home charger – Mercedes offers its own Wallbox which can be fitted for around €1,400 – €1,500 (that’s before the current grant subsidy of €600) – and you can charge overnight in around 7-8 hours. Using a three pin domestic slow charger can take up to 40 hours though – a reflection that increasing range does mean a lot of extra charging is required.

The inside will be familiar to owners of modern Mercedes-Benz vehicles, which is to say it’s rather nice indeed. The excellent MBUX multimedia system features a special EQC tile with, for example, a dial indicating charging efficiency rather than a traditional tachometer. Otherwise it looks and feels like a regular petrol or diesel powered car from the brand. 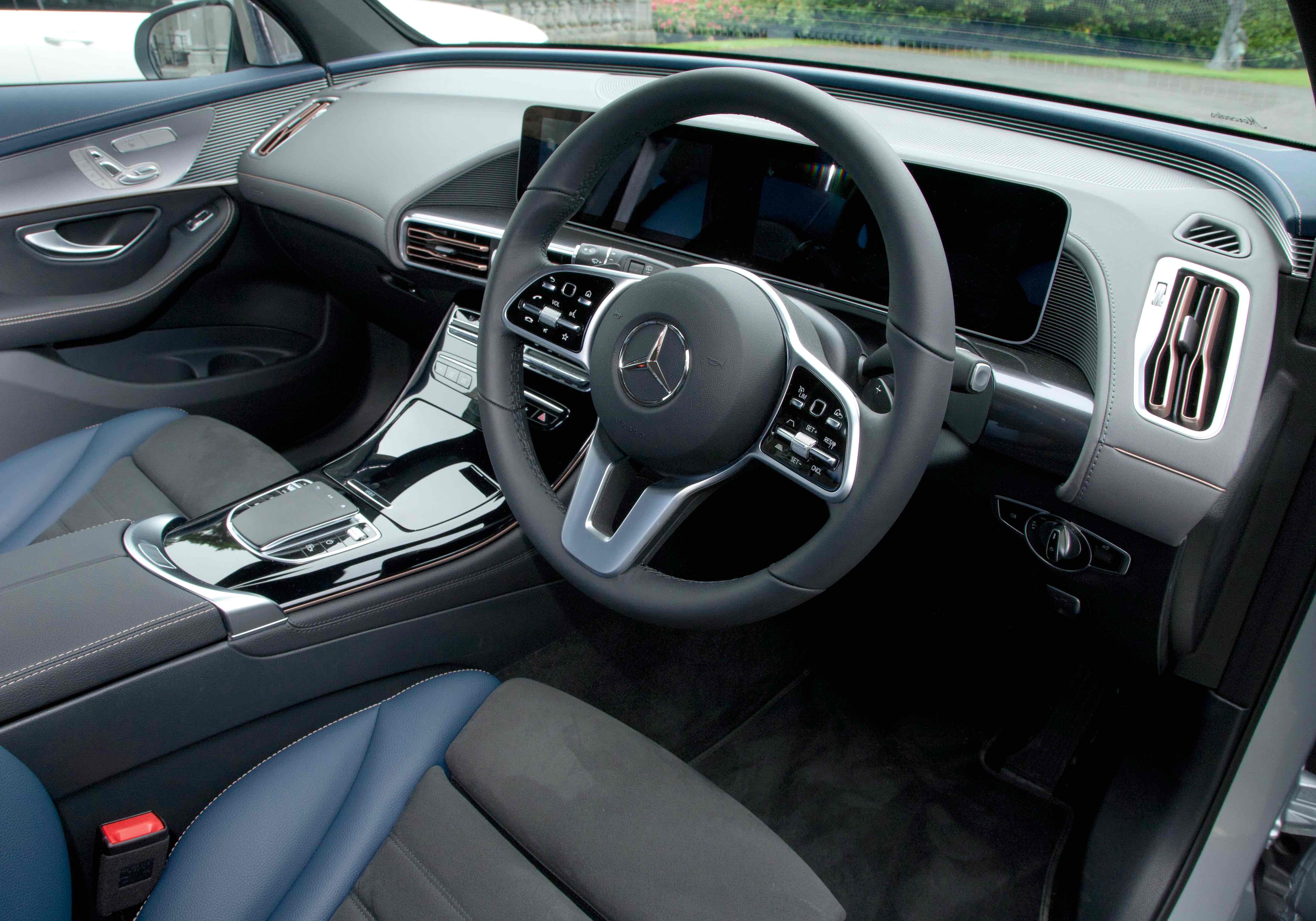 Driving the EQC, it’s as seamless and smooth as you would expect of an electric vehicle, with instant, back-snapping acceleration when you put your foot to the floor. Speaking of that, there’s a pressure point on the accelerator to help the driver keep within economical driving limits – just push a bit harder if you want to experience the full 408hp on offer. Steering mounted paddle shifts increase or decrease the energy recuperation retardation, meaning you can drive a lot of the time without touching the brake pedal.

Those looking for something special might be interested in a limited edition, fully specified EQC ‘Edition 1886’ version with a price tag of €105,882.

Rivals include the Jaguar I-Pace and Audi e-tron, both of which the EQC undercuts on price. Sales in Ireland start in Quarter 4 of this year.