Land Rover has unveiled the new Range Rover Sport, the third generation of its sports SUV. It goes on sale later this year with prices starting from €114,150.

Larger than the outgoing Sport, with a 75mm increase in wheelbase, the new model nonetheless retains many of the styling cues and proportions of its predecessor, notably the rearward sloping roofline, while also bearing a distinct family resemblance to the recently launched Range Rover.

While there’s an all-new range-topping V8 petrol engine, more relevantly there is a broad selection of electrification options available from launch, including mild hybrid and plug-in hybrid versions. A full electric Range Rover Sport will be offered in 2024.

Two six cylinder 3.0 litre petrol versions also feature MHEV technology, while at the top of the power charts is the new 4.4 litre V8 Twin Turbo developed with BMW, the only model in the line-up not to feature some form of electrification. It outputs 525hp / 750Nm and will accelerate from rest to 100km/h in 4.5 seconds.

Two plug-in hybrid versions are likely to prove popular, especially as they can be DC fast charged, while WLTP figures indicate a driving range on electric power of up to 113km. Combining a 3.0 litre petrol engine with a 105kW electric motor and 38.2kWh battery, two versions will be available – the P440e with 440hp / 620Nm, and the P510e with 510hp / 700Nm.

Built on the same MLA-Flex architecture as the full size Range Rover, all-terrain capability remains to the fore, with the Range Rover introducing switchable volume air springs on its Dynamic Air Suspension for better agility and control. The off-road Terrain Response system gets a road-focused Dynamic Mode alongside Configurable Terrain Response, as well as new Adaptive Off-Road Cruise Control. Cornering agility is also improved with the addition of all-wheel steering, which enables the rear wheels to be steered at up to 7.3 degrees out of phase with the front wheels.

According to Jaguar Land Rover Vehicle Line Director, Irishman Rory O’Murchu, the new Range Rover Sport is the most dynamically capable version to date: “New Range Rover Sport’s advanced chassis dynamics feed into its immense capability away from the tarmac, utilising its hardware and software to full effect. It is the first vehicle to feature our new Adaptive Off-Road Cruise Control, which has been engineered to help drivers focus on steering the vehicle by providing consistent and comfortable progress across rough terrain.”

The interior uses the latest Pivi Pro infotainment system via a 13.1 inch display, while there is also a 13.7 inch digital display in front of the driver. 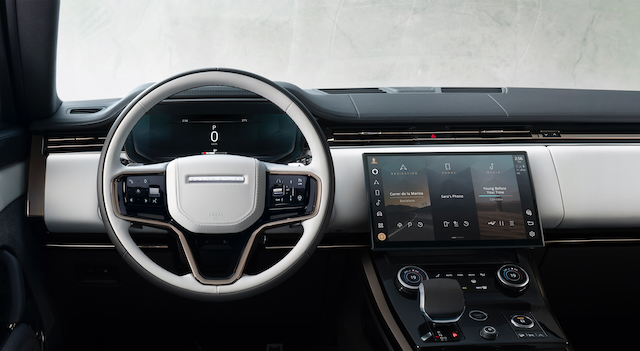 Three trim levels – S, SE, HSE and Autobiography will be offered as well as a special First Edition which will be limited to the first year of production.