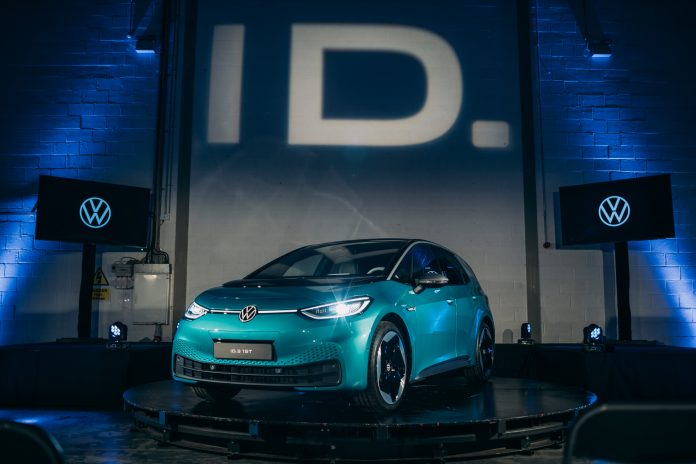 In the garlanded history of the automobile three cars stand out for their exceptional influence and impact. Undoubtedly there’s the Ford Model T, the first car to bring motoring to the masses, selling 16.5 million units from 1908 to 1927. Notably the other two are Volkswagens. Few will argue that the Beetle (the Model T of Europe with 21.5 million sales) and Golf (36 million plus sales and counting) – the car that put front wheel drive firmly on the map, represented major milestones in the evolution of the car through the decades.

At the all-electric Volkswagen ID.3 Irish unveil at Weston Airport in Dublin, you had to wonder if we are we seeing the arrival of a third milestone product from the German manufacturer. Certainly Volkswagen, like virtually all manufacturers these days, is committing wholesale to an electric future, aiming to put the scandals of Dieselgate behind it once and for all by reinventing itself as a clean, environmentally friendly car brand. “Volkswagen’s mission is for the ID.3 to bring eMobility to the masses,” Volkswagen Ireland Brand Director Gerrit Heimberg said at the unveil event.

So at first glance does the ID.3 stand out as a game-changer in the electric car world? Well, possibly not – there’s nothing particularly revolutionary or ground-breaking about the technology or design – but as an overall package it is right to the fore of current electric car development. With the power of the (freshly redesigned) Volkswagen badge behind it and judging from the volume of pre-booking deposits (over 36,000 in Europe), there’s every indication that the ID.3 will be a success.

Such is Volkswagen’s confidence that electric vehicle sales are about to take off, it is predicting that by 2021 one in five cars sold in Ireland will be electric. Even with the surge in growth in EVs this year that’s a pretty dramatic leap from the 3% electric sales recorded so far in 2019.

Sized somewhere between a Golf and Passat, the ID.3 is built on Volkswagen’s all-new Modular Electric Drive Toolkit (MEB) dedicated platform for electric vehicles. However clever use of interior space means it’s significantly more spacious inside than the Golf, particularly in the rear – in fact it rivals the Passat for head and legroom. Offered in three different battery size versions, the ID.3 will offer ranges of between 330km and  550km between charges. Volkswagen expects most customers to opt for the middle level 420km range version with 58kWh battery as range anxiety becomes less of an issue with improvements in public charging facilities.

With series production having started at the Zwickau plant which is set to become the largest electric car factory in Europe, the first ID.3 cars  – the limited production 1st Edition models – will arrive in Ireland this summer for those customers who put down a €1,000 deposit when the car was unveiled earlier this year. Over 400 Irish buyers have done so, and there are still a limited number of places available for the expected 30,000 production run.

Offered in three specs of 1st, 1st Plus and 1st Max, prices are from just under €40,000 to €50,000 after Government grants of €10,000. All versions come with the 58kWh battery and lots of specification including an advanced heads-up display, large central touchscreen and panoramic sunroof.

In order to help customers meet the not insubstantial asking price, Volkswagen Ireland is introducing a new payment method called ID. Plan. It’s similar to a PCP except that buyers do not need to stump up for a deposit and at the end of the three year plan the guaranteed minimum future value is fixed at 50% of the car’s price.

With the end of free to use public charging facilities, Volkswagen is offering customers its We Connect scheme which allow access to all the various recharging stations via a single account which is billed monthly. A monthly subscription service is also offered giving access to a defined amount of electricity per month for a fixed cost.

Volkswagen has also announced that it intends to become an electricity supplier though sister company Elli, offering green energy as part of its intention to become a carbon neutral company by 2050.