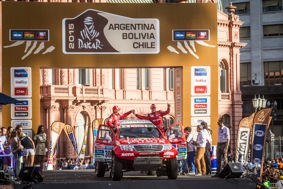 VILLA CARLOS PAZ (Argentina): Overdrive Racing and Hallspeed have one of the largest teams ever assembled to take part in the gruelling Dakar Rally and the Belgian-South African operation made a good start through the opening 170km special stage, held between Buenos Aires and Villa Carlos Paz, in Argentina on Sunday.

Dutchman Bernhard Ten Brinke and his Belgian co-driver Tom Colsoul had been the third quickest crew through the opening passage control of the short stage in their Overdrive Toyota Hilux and went on to reach the finish in an excellent seventh position.

Giniel de Villiers and Leeroy Poulter are driving the two official factory Toyota Imperial South Africa Toyota Hiluxes with Germany’s Dirk von Zitzewitz and fellow South African Robert Howie reading the maps. De Villiers reached the finish of the opener in fourth overall and Poulter was classified in 14th after being the second quickest driver through the first checkpoint.

The experienced Frenchman Christian Lavieille and his 2002 Dakar Rally-winning co-driver Pascal Maimon made a good start to their first Dakar with Overdrive Racing and the Toyota Hilux and set the 11th quickest time.

Jacek Czachor’s Dakar ended in tragedy even before the start. The Pole had intended to navigate fellow former enduro rider Marek Dabrowski in a Team Orlen Overdrive Toyota Hilux, but was forced to return to Europe after hearing of a close family bereavement. Dubai-based Briton Mark Powell was in Argentina to drive an Orlen Team press car and the Briton was duly promoted to co-driving responsibilities on the Dakar for the first time. “It was my ambition to take part in the Dakar, but it’s so sad it happened in these awful circumstances,” said Powell.

Dabrowski and Powell completed the opening stage in a solid 15th place.

The Argentine duo of Lucio Alvarez and Roberto Patti were classified sixth through PC1, but lost a couple of minutes later in the stage and reached the finish in 16th. Saudi Arabia’s Yazeed Al-Rajhi and German co-driver Timo Gottschalk completed the special a mere 32 seconds behind Alvarez in 20th place.

“There is nothing to gain from pushing hard on these early stages and making mistakes,” said Overdrive Racing’s team director Jean-Marc Fortin. “It’s a case of our teams settling in, finding a safe pace and taking no risks. It was a gentle stage to get everyone into the rhythm, but we know there are far greater challenges lying ahead over the coming days.”

After spending Sunday night in the town of Villa Carlos Paz, the route of the Dakar heads further west towards the town of San Juan on Monday.

Teams will tackle a much more difficult special stage of 518km in length before spending a night in the Cuyo region of northwest Argentina. A third stage in Argentina takes crews from San Juan to Chilecito on Tuesday. This third stage of 284km will be short by Dakar standards, but should feature plenty of rocky sections where punctures and potential suspension damage add to the risks.