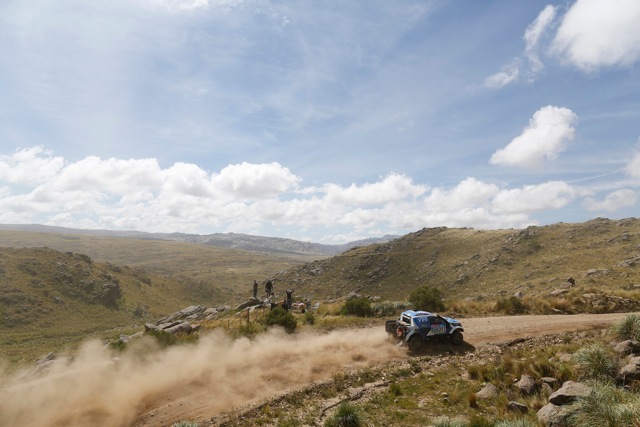 CHILECITO, ARGENTINA, January 6, 2015 – Federico Villagra and Andrés Memi maintained a consistent pace, stayed clear of trouble and recorded the 16th quickest time through the third 284km special stage of the 2015 Dakar Rally between San Juan and Chilecito in northwest Argentina on Tuesday.

Once all the back markers had reached the bivouac in San Juan late on Monday night and into the early hours of Tuesday, Villagra was classified in 52nd overall at the start of the shorter third stage into Chilecito at the wheel of his Neil Woolridge Motorsport-prepared Ford Ranger.

It meant that the Argentine had climbed a staggering 80 places in the overall standings on one special alone and he was full of confidence at the start of the tricky 284km timed test on Tuesday. This was despite losing further time on Monday afternoon with a flat tyre and a broken brake hose.

“That second stage was very tough,” admitted Villagra before the start of day three. “The heat was really unbearable and caused us to have problems with a wheel rim. We had to pump the clutch and purge it several times to get out of the dunes. It was not working well. “

Neverthless, the YPF Competicion Ford Ranger was 45th on the road for the start of the liaison to the third stage and running in a virtual equal 16th on the test through the first of the waypoint checks after 22km and down in 27th after 93km. The Ford Ranger driver continued to step up his pace as the stage progressed and was running in a virtual 21st through 180km. The Córdoba driver eventually reached the finish in a time of 3hr 19min 43sec to record the 16th quickest time of the day and climb even further up the rankings.

The Germany-based company South Racing is looking after Villagra’s on-event logistics and day-to-day management under the directorship of Scott Abraham.

Today (Wednesday, January 7), a gruelling road liaison section takes teams through the Andes foothills and climbs gradually through the San Francisco Pass to cross the spine of the mountain range through the snow line and into neighbouring Chile.

The route then spirals down through a series of switchback hairpin roads to the start of the first of the Chilean special stages – a 315km section across the dunes and sandy terrain of the Atacama Desert to a finish close to the copper mining town of Copiapó.