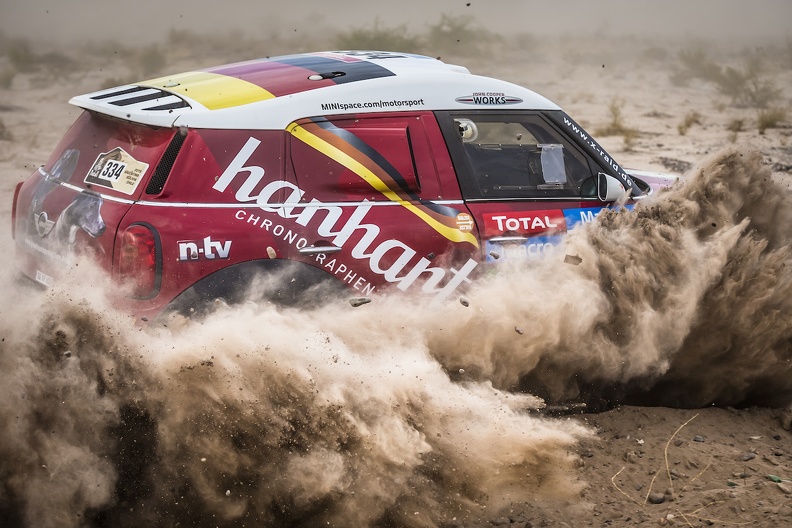 Another successful day for the MINI ALL4 Racing

Their four-time rollover in the closing stages of yesterday’s stage didn’t make a major impact on Terranova and Graue. They took the lead as early as at the second waypoint and defended it until having crossed the finish line. “We now have to push if we want to make it back to the very top,” said the stage winner who is back in third position, thanks to today’s success.

From Al-Attiyah’s point of view, the fifth place he had to cope with today is more practical than tragic. “We didn’t want to be the first to start into tomorrow’s stage and therefore, our current position suits us really well for tomorrow,” he said. “The final section of tomorrow’s stage will feature a lot of dunes and I think that this will offer us the opportunity to gain a lot of ground.” The driver from Qatar was the first driver to start into today’s stage. “Doing so wasn’t exactly easy. I know that we lost several minutes but this doesn’t matter. After all, we still hold a five-minute lead over De Villiers,” Al-Attiyah added in optimistic mood. Right behind him, Roma and Périn secured sixth position. “For us, the coming days will be easier as there won’t be so many rivals driving in front of us and we won’t have to cope with so much dust, now.”

Van Loon again secured a fine top-10 position although he lost some time when overlooking a whole in a dried-up river bed. “We were really quick in the opening stages,” said the Dutchman, “But then, we had to find another entrance into a river bed. Afterwards, we had to drive in the dust and I overlooked a hole I made a hard landing in, afterwards. In this incident, the track of one of my rear wheels was bent and from this point in time, the car tended to slightly pull in fast sections. And I always slid off in left-handers – while right-handers were okay. ”Due to this incident, he had to opt for a more conservative approach for the rest of the stage and now holds seventh position in the overall standings.

Rhakimbayev once again finished 11th, today and now also holds 11th position in the overall standings. “It goes without saying that I’d prefer holding a slightly better position,” admitted the Kazakh. “But we are delivering on a consistent level and that definitely is more important.” Even more so as his gap to ninth position amounts to just five minutes. Meanwhile, the two Russians Vasilyev and Zhiltsov had to cope with a dose of bad luck. “At first we lost our way and then we got stuck in the Fech Fech for 30 minutes,” Vasilyev said. “And this is even more annoying as the special stage went rather well for us, apart from that.” The involuntary break cost the Russians several positions and they now hold 12th in the overall standings.

In tomorrow’s fourth stage, from Chilecito to Copiapo, the field will cross the Andes for the first time. The day will begin with a 594-kilometre liaison section across the mountains – including a border crossing to Chile – that will be followed by a 315-kilometer special stage taking the competitors right to the bivouac.