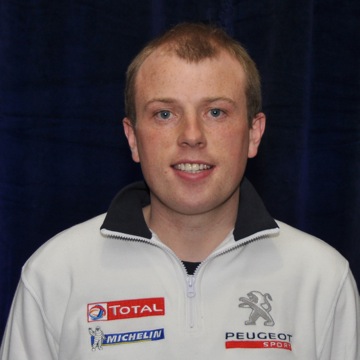 Andrew Slattery and his co-driver Andrew Browne have snapped up the 2014 Class 6 National Tarmac Championship award in a Peugeot 208 R2. Two wins in Carlow and Galway, added to a podium finish at the Circuit of Kerry, Circuit of Munster and the Tipperary Stonethrowers Rally and 16 fastest stage times during five rounds, saw the young Tipperary driver take the honours over the weekend at the Dunlop Awards ceremony in Athlone.

Competing with fellow Peugeot 208 R2 drivers, other entrants included Honda Civics, Citroen C2s, Citroen Saxos, Peugeot 206s. The Peugeot 208 R2, the current European R2 Junior Championship winner with Stephane Lefebvre behind the wheel, has proven to be the car to beat in the R2 category in 2014.

Presented with his trophy, Andrew Slattery, Service Manager at Slattery’s Garage, Puckane, said, “The Peugeot 208 R2 ran faultlessly all year, after a little blip in February that saw us literally down our tools and run to France, to pick up an engine part before the Circuit of Kerry. It’s been an exciting year for us and I want to sincerely thank Sean Holland, Managing Director at Finol Oils Limited, our chief sponsor, for all of their support in 2014. Massive thanks also to my supporting team. I really have a fantastic team of lads around me and I want to give a special mention to Martin Dunne, Technical Manager, at Gowan Distributors Limited, Peugeot Importers in Ireland.”

Andrew, from Nenagh, competed in his 205 GTi in the Irish 205 Challenge for 2 seasons, 2008 – 2009, winning the Novice Award in 2008 and gaining some vital tips and advice under the experienced eye of Rory Galligan. In 2009 he narrowly missed out on the top spot due to a crash on the 2nd last round. He made his debut in his Peugeot 208 R2 in the 2013 in the Irish Tarmac Championships.