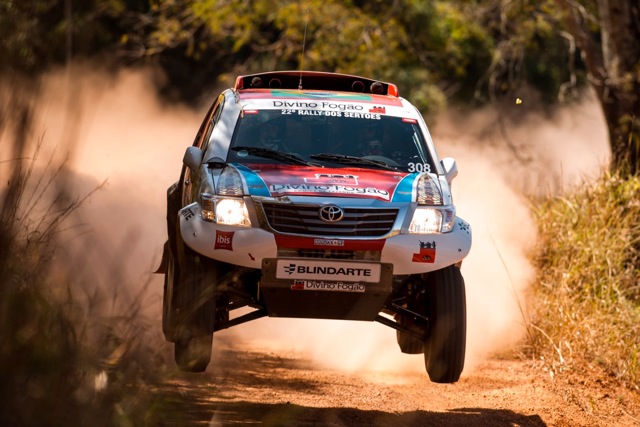 A second stage puncture and a time penalty cost them the early lead, but the Overdrive Racing pair won five selective sections and the Prologue in their Toyota Hilux and reached the finish podium 1min 38sec in front of Cristian Baumgart after Guilherme Spinelli had dropped five minutes on the final stage.

“This was a long and difficult rally and Reinaldo and Gustavo have produced a superb victory with their Overdrive Racing Toyota Hilux,“ said a delighted Overdrive Racing team director Jean-Marc Fortin. “They were the fastest crew throughout the event and the winning margin would have been much more had they not incurred a time penalty and sustained a flat tyre. I also say special thanks to Hallspeed for their support and efficient collaboration with their exciting Toyota project.”

Varela and Gugelmin started in the best possible fashion by winning the opening timed 10.82km Prologue stage in Goiânia with a time of 5min 59.1sec. Cristian Baumgart was second and four-time winner Spinelli was third amongst the 45-car field.

Varela was again on form on the first of seven selective sections between Goiânia and Caldas Novas. The Brazilian crossed the finish line of the 155.65km section just under two minutes in front of Spinelli to maintain the lead.

The second selective between Caldas Novas and Catalão was shortened from 202.23km to 78km on safety grounds, but Varela sustained a puncture and then collected a 10-minute time penalty, which cost him time and pushed him down to fourth position.

Stage three passed over remote trails between Catalão and Paracatu, ran for 209.86km and crossed into the State of Minas Gerais for the first time in the event’s history. Varela was back to winning ways and a time of 2hr 34min 29sec gave the Toyota driver the stage win over Spinelli and reduced his rival’s Brazilian’s lead to 7min 29sec. He retained fourth overall heading towards the Marathon stage.

The fourth stage ran from Paracatu to San Francisco and included 363.85km of competition in a total route of 585.30km. Varela was again on form in the Overdrive Toyota Hilux and recorded the fastest time of 3hr 52min 43sec to win the stage by 28 seconds from overall leader Spinelli. “It was not easy on such a long stage, starting first on the road, and having to overtake so many UTVs, motorcycles and quads,” said Varela, who climbed to third overall and within 7min 01sec of the overall lead.

The fifth Marathon stage headed from San Francicso to Diamantina and included 335.98km of competition in a day’s route of 645.44km. It was business as usual for Varela and Gugelmin at the front of the field and the Brazilian duo were again the fastest of the remaining 41-car field for the Overdrive Toyota team. A time of 4hr 25min 11sec was enough to reduce Spinelli’s overall advantage to 4min 04sec and moved Varela into second position.

The sixth and penultimate stage was a 178.87km loop around Diamantina and the stage win fell to Cristian Baumgart by a mere two seconds from Varela. Spinelli crossed the flying finish in third and took an overall lead of 3min 12sec into the final selective section between Diamantina and Belo Horizonte.

The final section included 125.88km of competition and Varela was again the man in form. He stopped the clocks in a time of 1hr 37min 22sec and that was enough to seal a dramatic last gasp victory for the Overdrive Toyota team after Spinelli dropped over five minutes and slipped behind Baumgart into third overall.