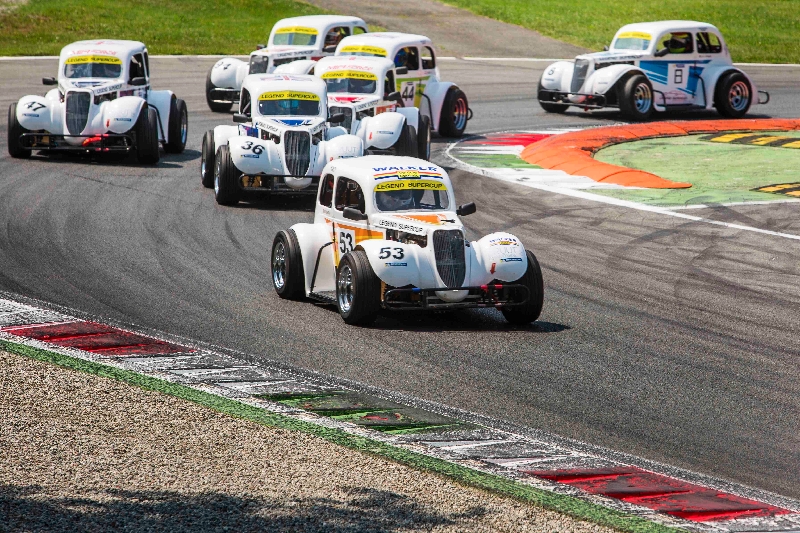 Ireland continued their strong performance in the in the newly formed Acceleration 14 Series scoring another strong haul of points which included one victory and six podiums at the famous Monza circuit in Italy.

Murray qualified pole position and after an extremely hard fight with Dutchman Danny Van Dongen & local driver Ricci he managed to claim victory, his 5th of the season. Race 2 Murray was embroiled once again with these two drivers and after a tough fight he would need to settle for the third podium position. Race 3 is reverse grid and would see Murray start behind his main rivals. A strong start saw him quickly move to second position behind Danny Van Dongen. Murray held this position until the final lap when a late charge from Ricci saw him pace Murray with a late lunge at Ascari pushing Murray onto the grass. As a result he dropped to fourth position but fought back at the final corner to take third position at the chequered flag. Keeping his impressive record of being on the podium in every race he has finished this season. After 12 rounds Murray continues to lead the series, 5 points ahead of Van Dongen.

Speaking after the weekend Murray commented: “After such strong pace in the early part of the weekend it was a little frustrating not to be stronger in race 2 & 3. But over I am happy to get a win and two podiums and retain the lead in the championship.

Meredith was confident ahead of Monza as he displayed a dominant performance at the last event at Nurburgring taking 3 wins. For the first race Meredith would line up 3rd. A great start saw him grab the lead and he managed to lead the majority of the race despite huge pressure for Georgia’s Davitt Kajaia and Great Britian’s James Holman. Meredith’s Walkers Vehicle Rental backed Legend lead out of the final corner but as they ran to the line Kajaia picked up the slipstream and piped him on the line by 0.01 of a second.

Race 2 was a lonely race for Niki, who started from 4th on the grid. Again he got a good start and managed to lead into the first corner. Later in the lap he ran a little wide at the famous Lesmo 2 corner, which allowed Holman and Kajaia slip through. Unfortunately they had enough of a gap to break the slipstream and Niki saw out the rest of the race the same distance behind the two ahead. Kajaia won with Holman finishing 0.002 behind in what is believed to be one of the closest ever race finishes in Monza’s history.

Sunday morning saw the arrival of two further Legends Supercup races, with Race 3 kicking off the day. With the results of day 1 determining the grid for day 2 Niki lined up second for Race 3. This time he followed the leader Kajaia into turn 1 and then made a move into turn two for the lead. After leading a couple of laps Kajaia slipped down the inside into turn 1, on the exit Niki got a better run and moved to pull alongside the Georgian. Kajaia quickly closed the door and the two made contact sending Niki into the grass at high speed. After rejoining both Holman and Kajaia were once again too far ahead for the Dublin man to get into the slipstream and he couldn’t close the gap. It finished Kajaia first, Holman second.

For the final race Niki started in 3rd position. He exited the 1st corner in second once again behind Kajaia and the two pulled out a small gap from the rest of the field. At the start of the race Kajaia seemed to be the quicker of the two, slowly extending his lead by a couple of tenths per lap. With 3 laps to go Niki began to slowly close the gap but on the final lap after setting the fastest first sector of the race and only 0.8 of a second behind Kajaia the Irish drivers fuel pump failed and he was forced to retire. Again Kajaia completed a perfect weekend and Great Britian’s James Holman came home 2nd.

After Monza Niki is still 2nd in the Legends Supercup and Ireland are still leading the Nations cup 7.5 points. Niki had this to say following his arrival home from Monza: “It wasn’t a bad weekend from a results point of view, but we he the pace to win, so it’s hard not to be disappointed. Davitt has extended his championship lead and closed in on the Nations points too. Hopefully we can try get the budget together to continue in the series as I feel I’ve a lot of unfinished business. I’d like to thanks Walkers Vehicle Rental for their support this weekend, without them we wouldn’t have been able to make it to Monza, and keep ourselves in with a shout of the championship.

The Acceleration 14 events will be aired on BT Sport and Motors TV in highlight shows in the coming weeks. For more information visit www.acceleration14.com.