Home Irish Motorsport News Barrable celebrates year with Tunnock’s Fiesta R5 with a return to the... 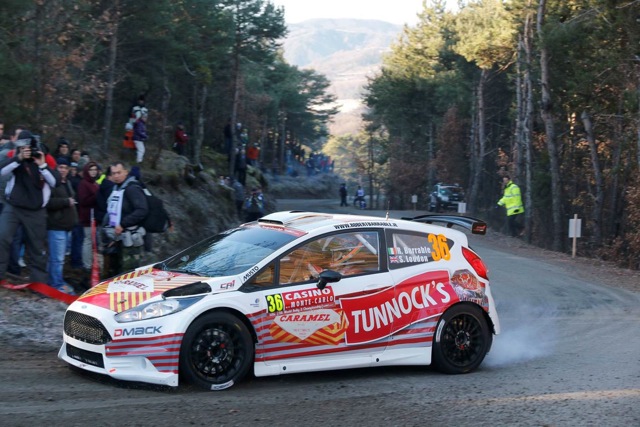 Robert Barrable will celebrate 12 months of rallying in his Tunnock’s World Rally Team Ford Fiesta R5 by returning to the place he made his debut in the car – the Goodwood Festival of Speed (26-29 June).

The Tunnock’s R5 has become an instantly recognisable car in the FIA World Rally Championship – where Robert and co-driver Stuart Loudon have finished in the WRC-2 top ten six times, including podium finishes in Spain, Monte Carlo and Portugal. They also finished 3rd overall on the Circuit of Ireland, a round of the FIA European Rally Championship.

The 26-year old driver from Swords, near Dublin, will once again drive his CA1 Sport-run Fiesta R5 on the 1.67 mile (2.69km) Goodwood Forest Rally Stage, with its chalk surface, jump and tight corners making it a spectacular sight for the near 200,000 visitors that are expected at this year’s event.

This will be the third successive year that Robert has run at the Goodwood Festival of Speed, having also driven a Fabia S2000 there for ŠKODA UK Motorsport in 2012.

This year’s Goodwood Forest Rally Stage promises to be the best ever, with an impressive entry covering three genre of rallying – The Birth of Stage Rallying for cars from the 1960s and ’70s, Legendary Group B Cars from the 1980s and the class that Robert will drive in – Giants of Modern Rallying.

Robert will be in very good company, as also making runs through the Goodwood Forest Rally Stage in the 70-strong field will be Sébastien Loeb (Citroën DS3 WRC) and Dani Sordo (Hyundai i20WRC).

Robert: “I love the Goodwood Festival of Speed because it’s a great opportunity to have some fun and run the Tunnock’s Fiesta R5 in front of such a huge crowd. The Rally Stage is very enjoyable to drive – it’s quite technical, you can get some big air on the jump and it’s great to put on a good show for the fans.

“This year I’m determined to take some time to have a good look around the Festival and explore the Formula 1 Paddock, watch some of the cars on the Hillclimb and drink in some of the amazing motorsport atmosphere. The Festival of Speed is unique, and one of the best events in the motorsport calendar.”