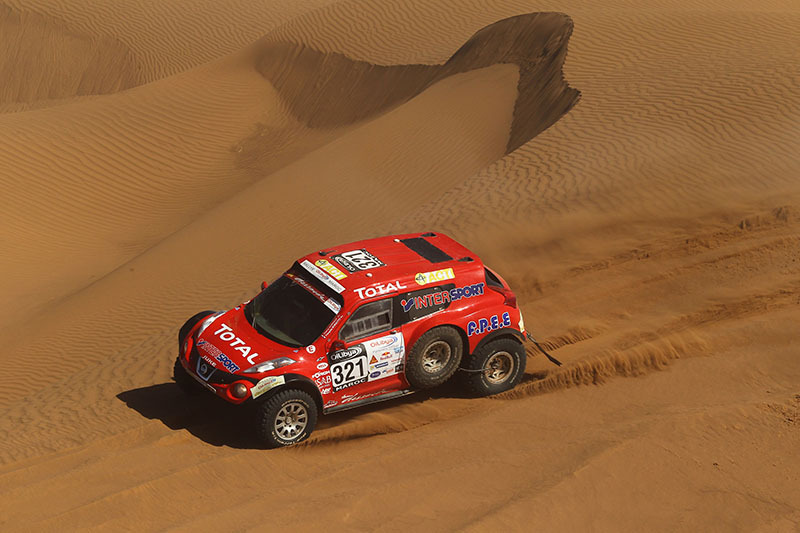 For all those who love rally raids, the end of the year is synonymous with the start of the most legendary of races, the Dakar. For Team Dessoude, who will be entering three cars, this new adventure started with a great surprise, the sort of surprise that cannot be anticipated and which does a lot of good.

André Dessoude was not expecting anything special, but the 2014 season will remain bright in his memory… The season had started with the team’s participation in the Dakar, followed by a rather successful entry in September’s China Grand Rally (4th and 5th overall), before taking part, a few weeks later, in the final round of the World Cup for Cross-Country Rallies, the Rally of Morocco. For this event, the Juke Buggy was in the hands of Thierry Magnaldi. Having claimed victory in the two-wheel drive (2WD) category, the team had headed back to Normandy with the intention of preparing for its 34th participation in the Dakar.

However, in mid-December, the news broke that Team Dessoude had won the 2WD category of the World Cup for Cross-Country Rallies. Surprised and flattered, André Dessoude still can’t quite believe it.

“Reading the classification of the World Cup for Cross-Country Rallies, I really could not hide my surprise… Having only entered one round of the World Cup this season, we claimed the title ! It turns out that the Rally of Morocco has a high coefficient and scores double points. As we won the 2WD category, we claimed the Team World Cup, and Thierry (Magnaldi) took the Drivers title. It was rather unexpected, but it was also very pleasant…

“For the Dakar, we will be entering three cars. The Juke Buggy with Thierry Magnaldi and Guy Leneveu and two Dessoude Proto 05 for the Chinese drivers Zhong Lei and Liu Kun.

“There will be some fierce competition in the Diesel 2WD category, with most notably the Peugeot cars and Stéphane Henrard’s buggies. As far as the Peugeot vehicles are concerned, it is difficult to get a true idea as they have not yet taken part in any rallies, but it should be very interesting. Our aim will be to win the category and if possible to finish in the Top 15 of the overall classification.

“Thierry has plenty of experience of this car which has great potential. To get a good result, rigorous race management will be needed, as well as not losing any time through all the usual Dakar potential problems.

“As far as the Chinese crews are concerned, I am really very happy to see them on this event, after their entry in the China Grand Rally. They will be the only 100% Chinese crews taking part in the Dakar this year.

“We are working more and more with China, and we have some fine joint projects together. They want to build other N05 cars, and we are working with them, to guide them and to share our experience with them.

“They are willing to listen, and are very motivated to make progress. It is a real pleasure to work with them and to see their true passion for motorsport in general and this area of the sport in particular. Some of the mechanics came to the workshop in Saint-Lô. Even if we do not speak the same language, it was very rewarding. And it is this enthusiasm which is pushing me to carry on, even if rally raids and the Dakar have changed a lot. I feel as if I have travelled back in time to rediscover the spirit that reigned in this category around twenty years ago.

“I think that the atmosphere will be great on the rally. Working with this Chinese team, the sport is still the most important thing, and has not been overtaken by business.

“The crews have changed a lot since their first time out. They are willing and have clearly shown that they want to do well. We are working together in an intelligent manner, and have built up real trust. On this front, it is a real success. I hope they will have a great race and that they will have results to match.

“Team Dessoude needed to adapt to face up to this new challenge.
This year, we are entering two T5 Service trucks and 2 Patrol cars for three race vehicles. It is a good balance, neither too much nor not enough. There are fewer and fewer French teams on the Dakar, and this year we will only make up 22% of the entrants. There are also fewer entrants overall; there is no doubt that the economic crisis is hitting this category as well.

“The Chinese entry strengthens our participation and allows us to set up a good little team while working for the future. A development programme for new cars is underway in China, with entries in local events being planned. There is still a lot to do, and we have not finished our frequent journeys to China…”

Everything is therefore in place for the most eagerly awaited rally-raid event of the season. The first stage for the entrants will take place on January 4th between Buenos Aires and Villa Carlos Paz !