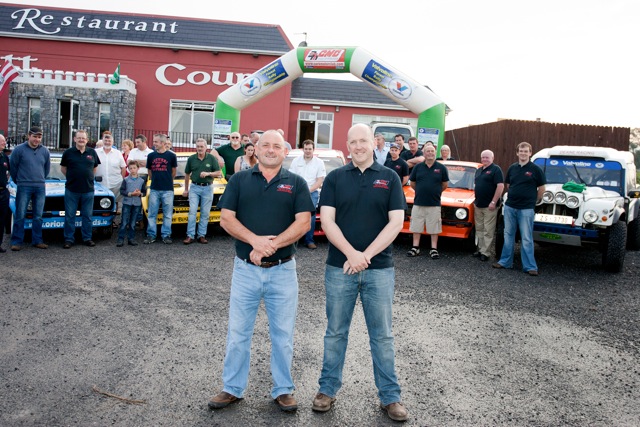 The launch of the DJD Transport Jim Walsh Cork Forest Rally 2014 proved as usual to be one of the great social nights of the year for the Cork Motor Club. There was a selection of cars which included the car that won the last two rounds of the Valvoline Forest Rally Championship the Hankook Mitsubishi of CMC Member Owen Murphy also on display were three fine examples of the legendary MK2 Escort Rally car owned by CMC members Jimmy Deane, Paul Fitzgerald and Johnny Kenneally.

After the promotional photos were taken outside it was in for food and lots of talk about the rally.

Clerk of the Course for the event Sean Daly said that the very enthusiastic team that put the event together this year were pulling out all the stops to make this event live up to its reputation as the competitors favourite forest rally in Ireland.

Sean thanked his team for the huge amount of work that has been put in so far and we are ready he said, there is huge interest in the event already and crews from both the UK and Northern Ireland  as well as all the Valvoline Championship regulars are going to compete in Cork. Sean also thanked his sponsors without whom the event would not run. He also spoke of the economic value of the event to the area. He said last year the EARS.ie MK2 Master was a feature added to the event and it proved hugely popular with a titanic battle between Frank Kelly and Marty McCormack.

Sean said, “we are sticking to the format that works 8 stages all in the Ballyhoura Forest complex with as little road mileage as possible Rally HQ will be Corbett Court” He then called on Leonard Downey of DJD Transport title sponsor to say a few words.

Leonard said DJD Transport is delighted to be associated with this event he thanked the committee for their hard work and wished everyone a safe and enjoyable rally.

Sunday, August 24th is the date to remember all the regulars from the championship are going to be there and the EARS.ie MK2 Master is expected to bring a few surprises to the forests of north Cork, so watch this space!

Majority of road deaths occur on Rural Roads in 2021