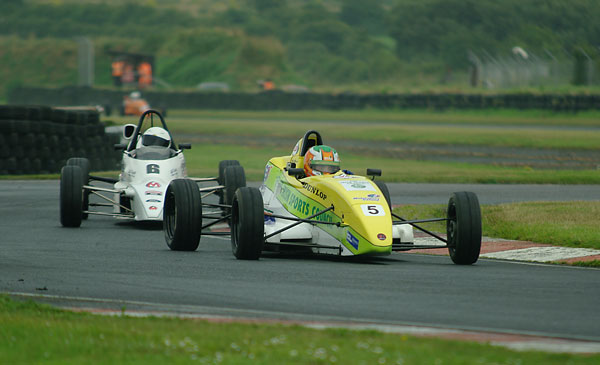 Mondello Park will crown its first ever ‘Champion of Mondello’ at the Leinster Motor Club’s ‘Leinster Trophy’ event on September 21st as the Formula Ford division of the series reaches its climax.

Introduced at the start of the year to encourage more drivers to compete at the circuit the ‘Champion of Mondello’ series has been run at all Mondello Park car race events during 2014 and will continue until the final race meeting in October.

The Formula Ford division will be the first of the five classes battling for ‘Champion of Mondello’ titles to complete it season and will do so at the September event in just two weeks’ time. All of the other classes will continue through to the October race meeting.

After six of its eight rounds, Stephen Daly leads the Formula Ford series into its final weekend having won all five races he has contested. He will carry an advantage of just seven points over Niall Murray into the double header on the Mondello Park International Track, with first round winner Neville Smyth a further twelve points behind. With a maximum score of 44 points available, any of this top three could still become the first ever ‘Champion of Mondello’.

The largest grid in Champion of Mondello action is provided by Formula Vee, and they too will race at the Leinster event, for both Champion of Mondello and National Championship points. Kevin Grogan leads the way here but he is closely followed by Stephen Morrin, Colm Blackburn and multiple Irish Champion Adam McCauley.

The Formula Sheane series still has three rounds to complete with a double headers at the Leinster Trophy and a single race finale in October. Just as they have in the National Championship for the past few seasons, it’s Kevin Sheane and Brian Hearty who are battling this one out. Sheane currently benefits from a fairly healthy lead due to Hearty’s non-finish at round three and looks likely to lift the crown.

Formula Libre is the fastest championship in the Series and also has half of its season left to complete. Mark Crawford leads the way from young Irish driver of the year nominee Darragh Daly, and fellow Formula Renault drivers Fergus Faherty and Cian Carey. The final series involved in the new championship is the Stryker Sports car class. Like all of the Stryker races held so far this season, the championship is a titanic battle between Alan Watkins, Alan Auerbach and Dave Griffin with any one of the three capable of coming out on top.

The full championship points and information on the Champion of Mondello series can be found at www.mondellopark.ie.