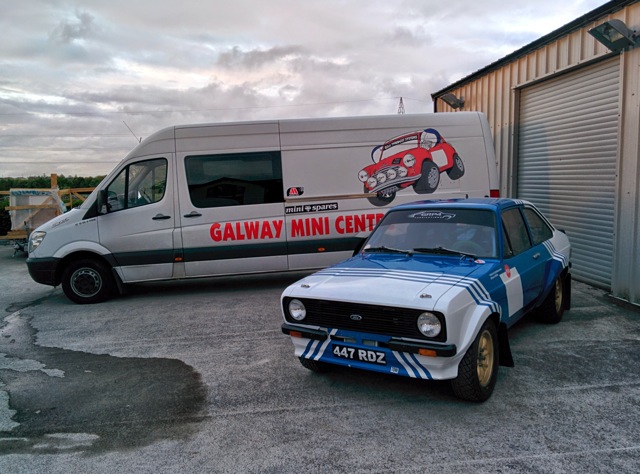 For Frank Cunningham and his co-driving nephew Ross Forde from Galway, the Rallye Du Maroc Historique starting on Sunday May 18th and finishing six days later on Saturday 24th, presents a daunting 5000 kilometre challenge, over terrain which includes 10,500 feet trails over the Atlas mountain’s.

Their Ford Escort MK2 RS1800 has been lovingly built by Frank’s nephews Martin and Jonathan Cunningham of C-Sport, and this family team effort is complimented by Frank’s brother Ray of Galway Mini Centre, whose preparation is a vital link. “I’m very lucky” says Frank who has been based in America for most of his working life “Indeed I’m lucky to have such a team and most of them are my family. It takes a good team on this event, as there are over 500 kilometres of stages, with long link sections, and at over 40 degrees things get hot! It’s a bit like the old days of rallying, as we will have a service van, and two support pick-ups with spares to tend the car, a proper adventure! There’s been a serious amount of hard work and preparation involved. For example John Wilcox has built us a fresh engine, and we have planned to make carburetion jet changes during the event to compensate for the high altitudes. The recce will give us points for where to do these. I have to get this plan right, or I will wreck the engine! At home I have been training hard for five months now, as I simply want to make the most of this magnificent adventure.”

This week Frank is recceing the stages with experienced Welsh co-driver Ryland James, before Ross Forde steps into the very hot-seat for the rally! Ryland along with Ross’s brother Arron will manage the entire crew on this exceptional event. The Dunlop shod Escort starts at number four, after a brilliant debut for the pair in 2013. “We were really surprised last year to be in with the front runners after the third day, but then I made a mistake! I just went too fast and drifted wide on a tightening right hander, and we got the car beached. Ross had to get out with the jack and lift the car up, and we dropped three minutes but managed to climb back to fourth. It will be a tough event, very dusty, but not as rough as you imagine. Most of the stages are three cars lengths wide, so flowing, they are fabulous. We have rallied on the Finnish stages twice, and are easily as good to drive on! There will be one or two rough sections, where we will need to be careful, but as event it’s magnificently organised thanks to the efforts of former driver Yves Loubet.”

Listed amongst the ninety-eight car entry, and starting at number six are former Peugeot WRC stars Gilles and Herve Panizzi in a Peugeot 504. Belgian rally legends Gregoire De Mevius and Bernard Munster are driving a Nissan 240RS and Porsche 911 respectively, and last year’s winner Christophe Vaison brings his glorious Lancia Rally 037, to what is going to be a dusty duel. Can the Irish team in their beautifully built MK2 Escort succeed against such world class opposition?