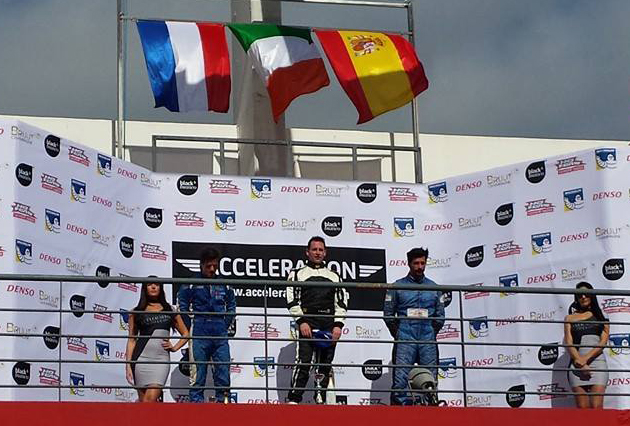 Ireland had a strong representation at the inaugural Acceleration 14 event in Portimao, Portugal taking a win and two podiums in the MW-V6 Pickup Series and the Legends Supercup by Eoin Murray and Niki Meredith.

The event started with good promise after free practice where both drivers got to grips with their new cars and the circuit quickly with Eoin ending in second position and Meredith in third. Both drivers really enjoying the circuits fast corners and huge elevation changes.

Eoin endured a difficult qualifying for race 1 as he was unsighted by a slower driver causing a collision. As a result Eoin would start race 1 in a lowly fourteenth position. Saturday morning Eoin was determined to put the bad fortune behind him and saw him grab pole position in the second qualifying session for race 2. A nice way to repay his mechanics after their hard work repairing his damaged car.

MW-V6 Pickup race 1 saw Eoin make a fantastic start quickly moving to third position in the early stages of the race. He dispatched Dutch driver Kelvin Snoeks on lap 6 and was closing on Swedish driver Alx Danielsson setting the fastest lap of the race in the process. Unfortunately a lack of power in the battery saw Eoin’s car grind to a halt. The car was repaired for race 2 where Eoin would start in pole position. Eoin did not disappoint and had a strong lights to flag victory taking the win by 5 seconds and setting another fastest lap.

The MW-V6 grid for race 3 is a reverse grid and Eoin would start from seventh position. A fantastic opening lap saw Eoin move quickly to the front of the field and took the lead on lap 2. However during the opening lap Eoin was forced over a high kerb and this damaged his wheel, tyre and chassis. As a result Eoin did not have the pace he had in the previous races and he was caught and passed by Danielsson. Eoin still had the pace to take a superb second position behind the former Renault World Series champion and comfortably ahead of Spain’s Carlos Alverez.

The Legend Supercup does not have qualifying and grid is formed randomly. Race 1 Niki would start from 5th position. Niki was involved in a close four car battle for the lead with Spain’s Daniel Campos Hull, Georgia’s Davit Kajaia & United Kingdom driver James Holman. Unfortunately while challenging for the lead Niki made contact with the number 47 car of Davit Kajaia and suffered a broken steering arm bringing his race to a premature end. These four drivers were the pace of the field and regardless of grid positions the four would battle it out together at the front of the field for the remaining three races.

Race 2 was a lonely race for Niki. Starting from 7th he worked his way to 4th but the 3 leaders had got away too far and he remained in 4th for the rest of the race.

The grids for the two races on Sunday are reversed results of Saturday’s races. This meant Niki started from last for Race 3. By the time they got to turn 3 Niki was already up to 2nd and he broke away with Spain’s Daniel Campos-Hull. The 2 pushed to make a small gap but after changing lead a few times they were caught by the Georgian driver. An epic 3 car battle ensued with the lead changing as many as 5 times a lap. On the last lap the Irish driver hit some oil and dropped to 3rd, that’s where it finished.

With the strong showing from Race 3 Niki was confident he could push for the top step of the podium. Starting the race from 4th he led out of turn 1 and again with the Spanish driver started to pull away from the rest of the pack. Unfortunately on lap 2 his car suffered an electrical malfunction and ground to a halt, ending a strong chance of Irish victory.

Eoin comments, “I was happy with my performance this weekend, although the car is totally different to what I am used to I was able to get to grips with it very quickly. Race 3 was a bit disappointing as I did not have the pace to fight with Alx but I was really lucky not to get a puncture with the damage. Race 1 & 2 were really enjoyable and delighted to get Ireland’s first win in the Acceleration series. Now I know the car and the series so am confident for Navarra this weekend.”
Niki comments, “I thoroughly enjoyed the weekend in Portimao and was proud with the pace we had. It’s given me great confidence for a strong performance in Spain next weekend and I will be pushing for wins.”

The next event is at Navarra in the North of Spain this weekend where Eoin & Niki will be looking for another strong showing.

The Acceleration 14 events will be aired on BT Sport and Motors TV in highlight shows in the coming weeks. For more information visit www.acceleration14.com.