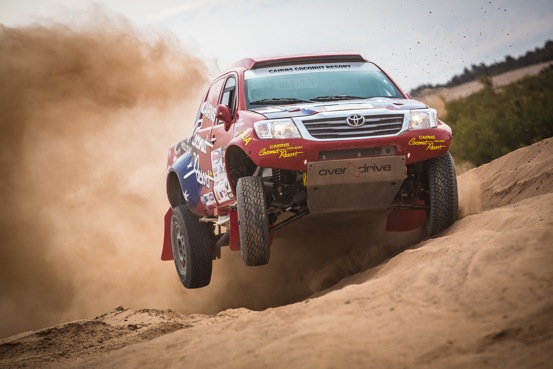 Belgium’s Overdrive Racing and Hallspeed of South Africa have joined forces and will send a 100-strong team of personnel to January’s punishing Dakar Rally.

The entire operation – one of the largest ever to represent a team on the rally – will field 10 Toyota Hiluxes in the world’s toughest cross-country bonanza that starts in Buenos Aires on January 3rd and finishes back in the Argentine capital on January 17th after passing through 13 timed stages and some of the most remote and demanding terrain in Argentina, Chile and Bolivia.

“We will run eight cars on the Dakar and supply logistical support to Hallspeed for the Toyota Imperial South Africa cars,” enthused Fortin. “It’s a huge and rewarding undertaking and one that has required a great deal of preparation. The race teams will be supported by engineers, mechanics, electricians and support staff in eight trucks, two semi-trailers, a pair of race trucks that will tackle the stages and provide back-up to the cars, a T2 emergency car and 10 additional vehicles for management and vital logistical staff.”

The team has yet to win the world’s greatest race, but De Villiers has come mightily close in recent seasons with a second, third and fourth position last year. Dabrowski and fellow Polish co-driver Jacek Czachor have been regular faces for the Overdrive Racing team in the 2014 FIA World Cup for Cross-Country Rallies and they finished seventh and best of the Overdrive Hiluxes in 2014.

Of the other seven Overdrive pilots, Bernhard Ten Brinke finished eighth overall in his first Dakar in 2012 while Alvarez has set some useful stage times on former Dakars. He finished 15th, fifth and 10th overall in 2011, 2012 and 2013 – his best result coming with Overdrive Racing and a Toyota Hilux.

Al-Rajhi is one of the most talented Arab drivers on the planet and will be tackling the Dakar for the first time, although the Riyadh driver is no stranger to desert rallying and also won the opening two rounds of the 2014 FIA World Cup in Russia and Italy.

Laveille is one of the most experienced Frenchmen in the sport and has tackled a number of Dakars and other long-distance desert events in an illustrious career. A former T2 World Rally Champion, Laveille finished a career-best eighth overall on the Dakar in 2011 after a series of retirements.

Olholm has raced with Overdrive on the Dakar before and finished 27th, 49th and 11th overall between 2011 and 2013 the Australian also winning the top privateer award two years ago. Both Issabayev and Jerie completed their pre-Dakar preparations at the recent Rally of Morocco and finished seventh and 22nd, respectively.

ASO takes the Dakar to South America for a seventh year
Organised by the Paris-based Amaury Sports Organisation (ASO), the Dakar is based in South America for a seventh year and returns to a start in the Argentine capital of Buenos Aires on January 3. The first section on January 4 guides teams from the capital to Vila Carlos Paz, the home of the WRC event in Argentina and the eerie moonscape-like tracks that have made the Rally of Argentina so popular.

From the Cordoba province, the rally heads west towards San Juan on January 5 and then into the Andes foothills and an overnight halt at Chilecito. Teams cross the spine of the Andes mountain range on January 7 and reach the copper mining town of Copiapó in Chile.

A daunting section north through the Atacama desert takes teams from Copiapó to the coastal mining hub of Antofagasta on January 8 and the rally drills further into the very north of Chile’s mining country and the town of Iquique on January 9.

Iquique will host the traditional Dakar rest day for bikes and quads only for the first time on January 10 and then the rally crosses into Bolivia for the second time in two years and on to the town of Oyuni.

After a second rest day for the cars and a new Marathon stage for the car category, action resumes with a stage between Iquique and Calama in the high Atacama desert on January 13 and then the event re-crosses the Andes mountain range into Argentina and on to the city of Salta on January 14.

The Dakar then passes between Salta and the town of Termas de Rio Honda for the first time and then moves on to Argentina’s third largest city Rosario on January 16. The final stage takes teams from Rosario in the Santa Fe province and on to the fanfare finish in Buenos Aires.