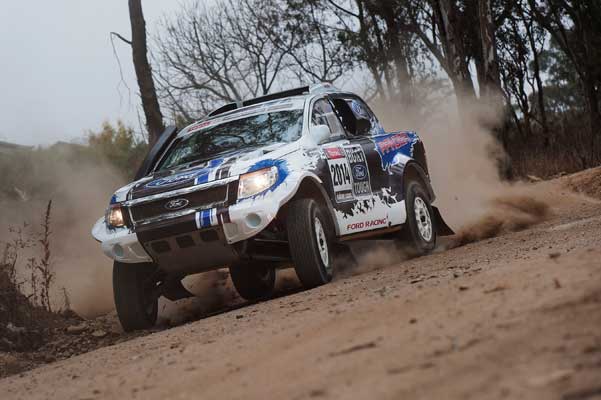 With almost a month to go before the highly anticipated start of the 36th Dakar Rally on 5 January in Rosario, Argentina, the behind-the scenes planning and logistics have been running at full tilt in preparation for Ford’s assault on the 2014 event, spearheaded by Neil Woolridge Motorsport and South Racing.

Facing some 9 300 km to be covered over 14 days of competition, it requires an inordinate amount of co-ordination and planning covering everything from the build the of race cars to selecting and managing the support crews, and even the simple but crucial details of accommodation, food and communications.

“We’re going to Dakar with a crew of 27 people for the two Ford Racing Rangers,” says Scott Abraham of South Racing, who has 10 years of Dakar experience. “That includes the drivers and navigators, team management, race engineers, car chiefs and mechanics, truck drivers, doctor and physiotherapist, as well as the media and PR personnel.”

In terms of vehicles there are the two Ford Racing Rangers that will be competing in the T1 unlimited production vehicle category, with Argentines Lucio Alvarez and Ronnie Graue (start number 308) and South Africans Chris Visser and Japie Badenhorst (329).

Additionally, the team entry includes a 10-ton four-wheel drive race truck that competes in the T4 class, two big 26-ton six-wheel drive service trucks, and a further six Ford Rangers for the rest of the crew and press.”

The T4 race truck does exactly the same route as the cars, and carries a range of essential spare parts including gearbox, suspension and drivetrain components. Its role is to provide rapid assistance to the race vehicles if they have an accident or pick up any mechanical problems.

“Last year Lucio Alvarez, Ford’s lead driver for 2014, had mechanical issues during the race and dropped from third place overall to 26th,” Abraham points out. “It’s essentially a given that if you have to wait for the T4 truck your chance of victory is gone, but a top 10 is still possible.

“With the support from the T4 truck, Lucio fought back brilliantly to finish in 10th place at the end, so it’s all about having the equipment and the people in the right place at the right time.

“No-one can be perfect for 14 days of racing. It’s really how you and the team bounce back, and Dakar is honestly 80-percent preparation and 20-percent luck,” he states. “You can’t change luck but you can adapt to it, and that’s what makes the Dakar Rally so much fun.”

The two dedicated MAN 6×6 assistance trucks are fundamentally the mobile workshop and the home-away-from-home for the crews. One of the trucks carries the bulk of the spare parts and tools, including 128 tyres and rims, a full range of suspension components, two complete spare body kits, along with spare engine components and gearboxes.

It also hauls the team’s powerful 50 kVa generator to supply a fully integrated 400-volt electrical system. In addition it houses the compressor, a Mastercraft tool box for each mechanic, all of the DeWalt power tools and other special tools needed to look after the race cars.

According to Neil Woolridge, head of Neil Woolridge Motorsport which built the Ford Racing Rangers and runs Ford’s cross country motorsport programme, they have produced a large number of spares based on the team’s experience with the new Ranger in the SA championship.

“Being our first Dakar Rally with the Ranger it’s difficult to decide exactly how much equipment and spares to take along, but we have a lot of experience in the team and know the vehicle really well,” Woolridge says.

“Aside from the regular maintenance and repairs at the end of each day, our main focus will be on the rest day on 11 January in Salta, Argentina. Here just about everything on the car will be replaced with the exception of the chassis and engine. The dampers, driveshafts, gearbox, clutch and differentials will all be replaced and the Rangers will race into the second week of the Dakar like new.

“From our testing and running the Ranger in the local championship we know the Ranger can do the distance, so barring any mishaps we’ll have all the parts we need to get to the rest day and then make it to the end,” he says.

The second 6×6 support truck is primarily for the logistics and mobile office, and carries washing machines to have the overalls cleaned every day, the catering equipment, gazebos and car tents, the fully sealed physio tent, benches, tables and chairs, and, crucially, two coffee machines which are the lifeblood of the team – everything that is required to keep the crew happy and motivated.

“It’s just like setting up and breaking down a small city every day,” Abraham says. “Although sometimes we will only cover 300 km, there are days that we will do over 800 km, including driving over the Andes to an altitude of 4 700 m. So each day is completely different with a unique set of challenges.”

On the operational side, the team will be relying extensively on mobile satellite communications. Each race and service vehicle will have a satellite phone with external antenna, along with a standard navigation system. At the bivouac each night a satellite station will be set up with full wi-fi and internet access to ensure that the team’s performance and results are communicated around the world.

“The huge interest and exposure for the Dakar Rally means that we have to be live, especially with social media,” Abraham explains. “This is a truly a global marketing event with over a billion viewers, so we need to communicate effectively.”

With Dakar Rally 2014 looming ever closer, the Ford Racing Rangers have undergone the final preparations at the Neil Woolridge Motorsport factory in Pietermaritzburg and will be flown to Argentina on Friday 6 December.

The team will fly out to Argentina on 29 December and, on arrival, will head straight for the Ford plant in Buenos Aires to do the final preparations on the race cars, and pack the race and assistance trucks.

The trucks and service crew Rangers departed from the port of Le Havre in France on 22 November on a dedicated ship carrying a total of around 700 Dakar race and support vehicles. The 21-day crossing ends at Port Euroamerica in Argentina.

Finally, the administrative checks and vehicle scrutineering will take place in Rosario city centre on the 2nd and 3rd of January followed by the ceremonial start of Dakar Rally 2014 on the afternoon of the 4th.