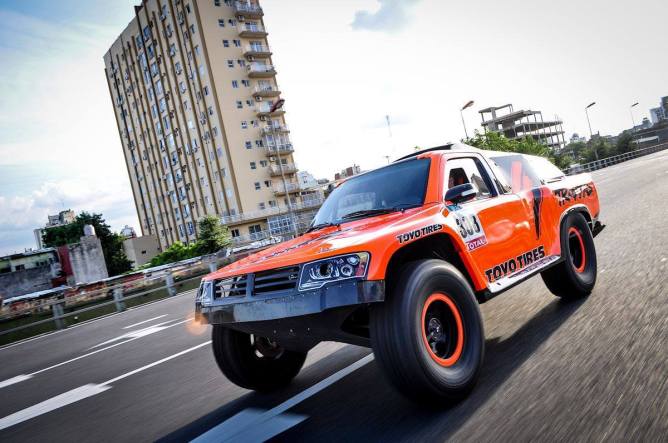 Toyo Tires & Race-Dezert Team Up for the Legendary Race

Toyo Tire U.S.A. Corp. and Race-Dezert have teamed up to bring off-road fans unique coverage of the 2015 Dakar Rally.  For the first time ever Race-Dezert will have an independently operating team on the ground to capture photos, videos and stories from beginning to end of this legendary race.

The 2015 edition of the marathon rally will be held January 4 – 17, spanning three countries – Argentina, Chile and Bolivia – and nearly 5,650 miles. The 13-stage race is known for the challenging terrain including remote deserts, soaring mountain passes and vast sand dunes.  The demands on drivers, machines and their tires are the most brutal of any sport.

“Our goal is to give off-road fans more Dakar Rally coverage than ever before,” said Amy Coleman, senior director of marketing, Toyo Tire U.S.A. Corp. “The Toyo Tires/Race-Dezert team will be on the ground, among the racers, and with the fans putting faces and experiences to the most exciting off-road race in the world.  It is also an exciting opportunity to make new fans and grow the worldwide presence of off-road racing.”

“Working with Toyo Tires we have put together the perfect Dakar media team in my opinion,” said Klaus Rasch, founder and ceo of Race-Dezert.com.  “We have a mixture of Dakar experience, professional photography, superb storytelling, English, Spanish, and German language skills between us — our equipment and vehicle. This group will elevate the Dakar coverage to new levels for Race-Dezert.com.”

Rasch, Eugenio and Puente will drive a specially prepared 2014 Toyota 4Runner which was shipped to Buenos Aires earlier this month.  Modifications include a set of Toyo Open Country R/T tires to tackle the rugged terrain as well as a Rigid Lights 30” LED light bar, KMC wheels, a Fox Shox installed suspension and Speedstrap recovery straps.

Racing for Team Toyo in the 2015 Dakar Rally is multiple-championship winning driver Robby Gordon with his SPEED Energy / Toyo Tires #308 Gordini; and Guerlain Chicherit of Team X-Raid driving the #323 buggy.  Both drivers have won multiple Dakar stages in the past, and both will rely on championship-winning Toyo Open Country tires as they race to capture more victories in 2015.