Large-engine vehicles (those in excess of 2,000cc) are in decline with their numbers dwindling according to Vehicle data specialists Cartell. There has been a 72% decrease in the number of 2 litre vehicles registered in 2012 versus 2007. Values have fallen such that the tax on 10-year-old large-engined vehicles can be as high as 40% of their value; and even for 6-year-old vehicles can represent anything from 10-15% of their value. Compare this to a smaller vehicle: a Toyota Yaris registered in 2000 has a market value of approximately €2,300 and annual taxation of €199 – or 8.7% of its value.

The rapid demise of large-engine vehicles can be attributed to a number of factors:

The taxation system penalises larger engines: an owner of a 3.0 litre engine which is 10 years old will pay tax in the region of 40% of the value of the vehicle in year 10 of ownership. The owner of a 2.0 litre engine will pay tax at around 25% of the value of the vehicle in year 10. Generally speaking vehicles with larger engines are seen as environmentally unfriendly and consequently have found less favour with a more environmentally conscious buying public. This emerging trend, and the decline in large-engine vehicles generally, can be observed in the following chart. Cartell.ie tracked the total number of large-engine vehicles (vehicles with a displacement greater than 2,000cc) currently live in the Irish fleet for registration years 2000 to 2012.

The attached chart (Vehicles over 2,000 in Irish fleet) shows popularity for large-engine vehicles has waned dramatically. This is particularly evident since the introduction of the CO2 based regime in 2008 when smaller vehicles, consequently producing less CO2, were better placed to benefit from tax incentives for environmentally friendly vehicles. 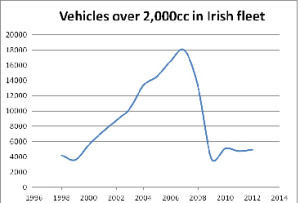 Here is the full breakdown:

The value of large-engine vehicles has been affected by the loss of popularity for that vehicle type among the buying public. In order to highlight this point Cartell examined the residual value of two vehicles – the family friendly 2.0 litre Ford Mondeo and the powerful 3.0 litre BMW 530 saloon. We also examined the taxation of those vehicles, currently €710 for the Mondeo in the pre-2008 regime and €1,494 for the BMW in the comparable regime.

In the case of the Ford Mondeo (see attached chart) the rate of taxation based on the pre-2008 motor taxation regime (which is based on engine size) is currently €710. Based on Cartell valuations for the vehicle throughout its lifecycle the Mondeo is worth less than the value of its motor tax after 15 years (currently 1998 registration year).

In the case of the BMW 530 (see attached chart) the rate of taxation based on the pre-2008 motor taxation regime is currently €1,494. Based on Cartell valuations the BMW will already have reached its own motor taxation value after 12 years (currently 2000 registration year). From that point onwards the owner is paying significantly more for the taxation of the vehicle than the car is worth in the market.

We are witnessing the end of the large-engine vehicle in Ireland. This can be attributed to a variety of factors: the introduction of a motor taxation regime which focuses on penalising vehicles which emit more CO2, the waning in popularity of vehicles which are more expensive to run, and changing trends in the market. We can see this decline from two different vantage points: (1) the drop in overall numbers in the Irish fleet of vehicles greater than 2,000 cc; and (2) the relatively larger drop in value of large-engine vehicles using motor tax as a constant.