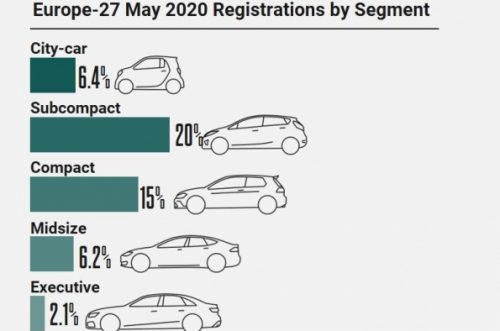 Although, both have been severely affected by the outbreak, private registrations are often more profitable for OEMs, and are thus a more realistic indicator of the economic temperature.”

While gasoline and diesel new car registrations decreased by 62% and 59% respectively in May, electrified vehicles posted a moderate decline of just 8%. In fact, their volume fell from 103,400 units in May 2019 to 95,300 units last month. This small decline allowed electrified vehicles to increase their market share from 7.2% in May 2019 to 15.3% in May 2020, taking the year-to-date volume to 600,500 units. This is less than half the total recorded by diesel cars, at 1.17 million units.

Growth was driven by PHEV, as the models offer a viable alternative for those hoping to buy a more affordable cars than pure electric vehicles. Munoz stated: “The crisis has shown us that hybrid demand and growth fluctuates, while plug-in cars gain traction due to lower prices. Nevertheless, we suspect that mild-hybrids will soon boost hybrid sales.”
The Renault Zoe led the ranking among the electric vehicles, but the Volkswagen e-Golf was the true driver of growth in May. The Ford Puma also outsold the Toyota Yaris, and the Fiat 500 secured sixth position among hybrids – both mild hybrids. The PHEV were led by the new Ford Kuga, clearly impacting the popularity of the Mitsubishi Outlander.

The worst performing segments were the MPVs, city-cars, luxury sedans, compact cars and executive sedans. In fact, the MPVs registrations fell so heavily that they were outsold by the Vans (LCV-derived), now more popular among European consumers.