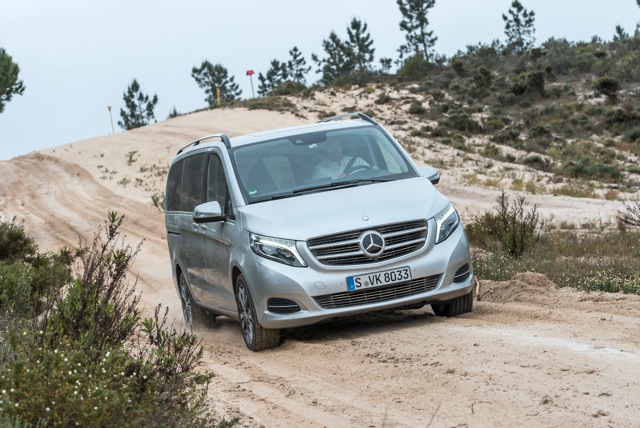 With the new Mercedes-Benz V-Class having just been launched in Ireland, Fleet Car magazine has had an exclusive first drive in the all-wheel drive version. Announced at the Geneva Motor Show last year, the V-Class 4MATIC features permanent all-wheel drive using the same drivetrain which powers the Mercedes-Benz S-Class and C-Class.

The V-Class itself is every bit a luxury car clothed in a van shaped body. It can seat up to eight in true comfort, and with a versatile seating arrangement that can include swivelling individual captain chairs or bench seats that can be removed entirely to create more space, plus a folding table, it can accommodate the needs of everybody from large families, VIP transport for hotels or executives wishing to carry out business meetings while on the move. Up front too, the driving experience is more in line with the S-Class than the Vito panel van, with high quality finishes, and an impressively quiet cabin when on the move.

Another target market for the V-Class are lifestyle sports and outward bound enthusiasts, and it’s perhaps this segment for whom the all-wheel drive version might have most appeal.

The 4MATIC system uses a longitudinal horizontal engine and a block configuration for the main transmission and transfer case matched to the 7G-TRONIC PLUS automatic transmission. Power is normally split 45% / 55% front / rear but if any wheel loses traction the system automatically distributes power to the wheels with better roadholding, negating the need for conventional mechanical differential locks.

An additional feature on the V-Class 4MATIC is the Downhill Speed Regulation system (DSR). It’s activated via a control button to the left of the steering wheel and assists the driver by carrying out specific braking intervention on downhill stretches. The steeper the downhill gradient, the more DSR applies the vehicle’s brakes.The system operates on the basis of a manually set vehicle speed. This can be set at between 4 and 18 km/h using the brake and accelerator pedals or the cruise control lever. This set speed can be raised or lowered at any time by braking or accelerating.

A test route to the south of Lisbon in Portugal this week indicated a seamless driving experience. Externally the only clue that this is a 4WD vehicle comes from the 4MATIC badge on the back – there’s no increase in height or ground clearance to differentiate it from regular models. On the road too it drives exactly like the rear wheel drive versions, with a smooth gear change and no sign of clunking that you sometimes get with all-wheel drive vehicles.

We also took the V-Class for a spot of off-roading on tracks featuring rather soft and deep sand. Interestingly I had taken a rear wheel drive Marco Polo Activity camper van on a similar track the previous evening and on more than one occasion had come perilously close to getting stuck. With the all-wheel traction V-Class though, there were no such dramas. While it was clear that the terrain underneath was far from solid, the V-Class ploughed on resolutely, including up some hills that the rear wheel drive version would have had no chance of navigating.

The Mercedes-Benz V-Class competes in a niche market, and the 4MATIC version will be a minor player within overall sales. Yet for somebody that’s after the luxurious practicality of the V-Class combined with the security and go anywhere ability of 4WD. it could be just the ticket.