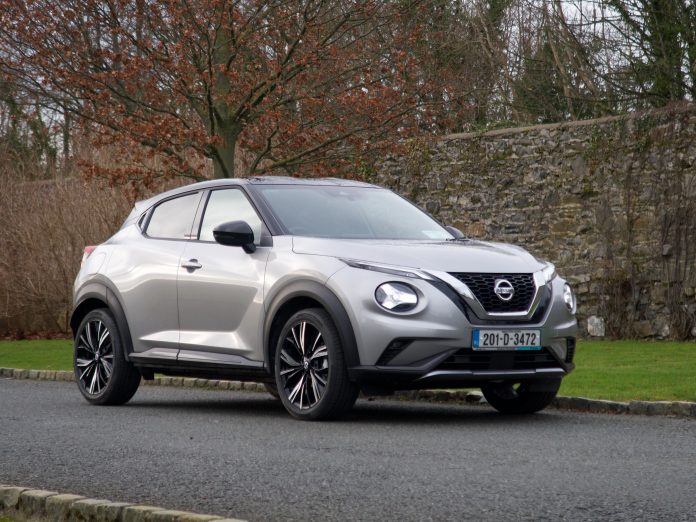 Nissan’s contribution as a shaper of modern car design is perhaps too often overlooked. This is the brand that effectively created the crossover segment with the original Qashqai, and repeated the feat a few years later with the first B-segment crossover, the Juke.

That Juke of 2011 was a design trailblazer in another way too. Its distinctive looks, with angles jutting off in all directions, weren’t to everyone’s taste, but proved to be a harbinger of cars to come, with swoops, curves and angles very much part of  mainstream design these days.

The 2nd generation Juke which has just arrived in Ireland keeps the distinctive looks, albeit slightly toned down. Crucially it’s an improved car all-round to its predecessor, from space and refinement to the technology now available. Not many decisions for potential customers to make on the engine front as only a single petrol unit is being offered, a 1.0 litre 3-cylinder unit that produces 117PS and 180Nm of torque (200Nm with over torque function). Diesel isn’t featuring, while Nissan has confirmed that the Juke’s platform isn’t suitable for an electric version. They’re keeping mum on a possible hybrid version down the line though.

In fairness this petrol engine will tick most boxes – it’s free revving and lively with lots of low down torque. There’s a choice of Standard, Eco and Sport modes to select from in the higher grades,  with the Sport setting giving a noticeably more sparky performance.

You can opt for a six speed manual gearbox which works very nicely, or for the first time, a dual-clutch automatic. Wasn’t convinced about the latter following a brief run – you have to be gentle with the throttle when moving off from standstill as there tends to be a surge of power, while there’s a perceptible lag between gear changes.

Official fuel consumption figures are 6l/100km for the manual transmission and 6.1 l/100km for DCT, with WLTP measured CO2 emissions figures of 135 g/km and 138 g/km for manual and auto respectively.

Ride comfort seemed perfectly acceptable over some typically Irish rural roads in County Kildare.  We’d need to spend longer with it to comment on handling capabilities but first impressions are that for a crossover the new Juke seems to grip and corner pretty well. The cabin is much improved over the old car and boasts nice quality finishes that would not look out of place in more premium cars. Back seat passengers will really notice the extra space compared to before – it doesn’t feel claustrophobic the way the old car could and there’s an extra 5.8cm of knee room plus 1.1 cm more headroom. Meanwhile the boot is 20% bigger than before, up 68 litres to a very respectable 422 litres. Despite being physically bigger, the new Juke is actually lighter – by 23kg – than before. Opt for the automatic and you can benefit from ProPILOT technology which offers semi-autonomous driving in slow-moving traffic.

On the trim front there are the familiar XE, SV and SV Premium specs, while the range topping SVE is joined by a similarly priced N-Design trim – allowing customers to choose between comfort or more tech focussed equipment.

Having created the segment, Nissan is well positioned with the new much improved Juke to return to the summit of the B-Segment crossover category.